As 2020 went, our preparation in summer and preseason was as difficult as ever.  After our first 3 games, it was clear that some of our normal coverages and pressures were going to be difficult to implement.  In a normal summer, we would have participated in weekly 7 on 7's and attended several contact camps.  During the summer we work to install our base defense and our different pressures.  At Manhattan High, we play a 3-4 2 high safety structure.  We like the flexibility it gives us to change fronts and coverages.  Generally, we have lots of opportunities to install our coverages, heavy in quarters concepts, live against several schemes and formations.  We also like to play some 1-high concepts to close the middle of the field with our pressures.  Because of the uncertainty of 2020, we began looking at more man concepts as we were concerned that we could lose players to illness and quarantine.  We hoped some man concepts would be easier to plug and play if we needed to borrow from our offensive platoon.  However, as we did get into situations where we needed to move some kids around in the first few weeks, we simply became short in the secondary.  Though some of our man pressure concepts were effective, the jump ball became an issue.  We often like to solo the single WR and that became difficult as well.  We needed a way to protect some of our smaller corners and we needed some simple ways to get to our zone concepts against some mobile quarterbacks and speedy skill players.  What we needed was the ability to play with zone eyes and continue to help our backers and secondary play aggressively.  We felt like some simple 3-safety concepts could help us continue to put pressure on offensive pass pro and give our secondary clearer and simpler rules as we needed to change personnel from week to week.

We started by installing two main 5-0 pressures with zone concepts behind them.  These pressures could have easily evolved to man pressures, but this year we did not want to have too many.  At Manhattan, we believe in teaching concepts and as many one-word calls as we can so that we can easily transition to up-tempo teams.  Our 5-0 stack pressures are named after states because there are 50 (5-0) states.  Ohio was our first installation and an effective pressure we use against Inside Zone and sticks throwing 10 personnel teams from our 3-4 base.  It is a simple edge pressure paired with a pinch to a bear front. 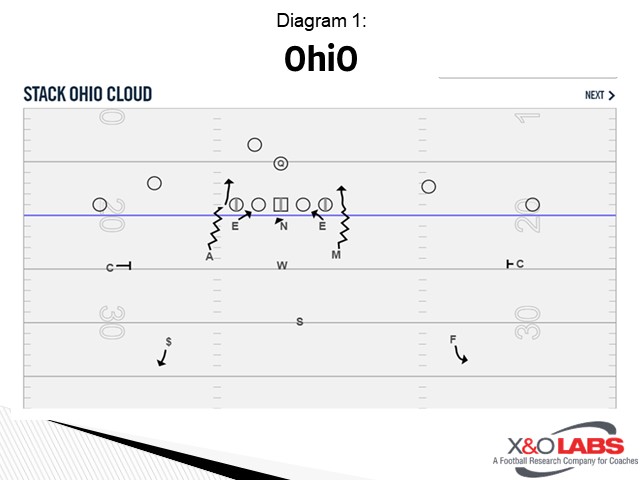 Our boundary Anchor backer simply stacks to a wide 5 and our Will and Mike slide to 0 and wide 5.  For our inside backers, these are alignments that we will use sometimes against trips, so the stack was an inexpensive install.  Our Anchor is often walked to 3x3 from the end man on the line of scrimmage, so this alignment was not uncomfortable for him either.  Our 0 (Will) backer can mirror the back or play the low hole against the pass.  Our D-line remained in a 4-0-4 front.  The first O in Ohio speaks to the stack backers telling them to creep and blitz a hug or peel technique on the back.  The second O in Ohio speaks to the secondary telling the most Outside defender or the corner that they have flat and force. Our Safeties then essentially pre-aligned in Tampa and played a simple Tampa concept.  Our nickel is our main adjuster.  He moves to the high hole.  He reads the mesh for run/pass.

Speed Option and other flexbone concepts have highly influenced many of the offensive teams we see, and we always must be ready for those types of option plays.  A common check for offenses against Bear-type fronts is to run speed option.  Many of our opponents will attack bear fronts with edge QB runs.  In this alignment, our squat corners are ready to attack quick game and set the edge versus outside run and option.  Our nickel can also run downhill and is often unaccounted for in the blocking scheme.

In coverage, we all have zone eyes.  The pressure we are going to call mostly in passing situations and the edge pressure usually is going to get the ball out quick.  The front remains solid versus many runs as most offensive coaches are not going to get excited about blocking a bear front.  We like this pressure against teams that like to throw wide receiver screens in third and long situations.  Also, many teams will not be shy about trying to take shots at their best receivers on third-down scenarios.  If the best receiver is a split end, we get a one under one over double in coverage and the 3 high alignment creates some ways to double slots, as well.