As we have developed our zone pressures, we have started to add different coverage concepts on the backend. We used to use Cover 3 exclusively and we did it the same way. This was a very effective way to cover down on your pressures and we will discuss. We found that as opposition coaches found ways to attack our one coverage, and quarterbacks were able to execute, we had to add a few more concepts; both to defend the run and pass from the back end of zone pressure. The concepts we will get into here are the base Cover III, Cover III Cheat, Cover II, Gator Coverage and Split Coverages.

We live in a “why” society (which isn’t bad). Your players and assistant coaches want to know the why.  This forces the coordinator to make sure that he has good reasoning for what he is doing. We use to be a man blitz team or a zone pressure team that voided zones.  We believed that high school teams would be unable to pick up the pressures and even if they could, they would not be able to find the voided areas in their run and pass game.  We were right, for a long time, then we became less right as offensives started to evolve.  Finally, we knew we had to make a change because our “why” became “because we have always done it that way” – a very dangerous answer.

As we searched for a better way to call, execute and cover in our pressure packages we met with multiple college and high school staffs. Coach Steger, the incredibly well respect defensive coordinator at UM-Duluth, really has guided us through the process of making zone pressures a main stay in our defense. I have written before on the different pressures you can bring, and really they are as endless as your imagination, so instead of the pressures let’s look at the variations in coverage you can use in a very basic pressure. 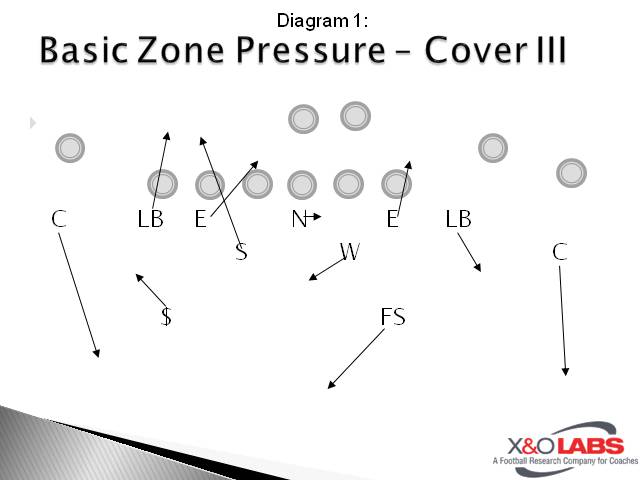 Very important to keep safeties on the hash until snap of the ball or they will tip the pressure. This might sound like coach speak but it has hurt us. Your back end kids will have plenty of time to get there. Here are some coaching points for the roll down safety ($ in Diagram 1).

It is important that the safety that is rolling to the middle doesn’t over rotate and give up hips. He can be slow to go because he won’t be threatened until a deep route shows up.  The FS is needed in the run game on his side so if he bails to the middle to early, not only has he tipped your hand, but your run fits and spacing are a mess.

Your corners have to understand they are cover 3 corners and if they have any #2 vertical threat they have to honor it and we will be light in the flat. We will teach our corner away from the pressure to be a little more aggressive as a lot of times the ball comes out fast his way. 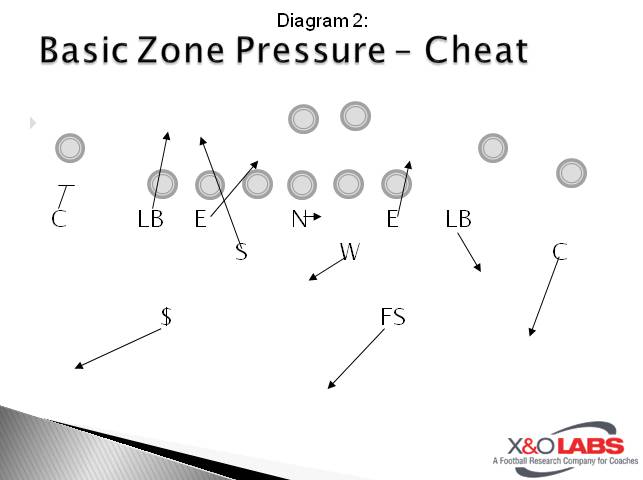 One of the important parts of any defense is knowing it’s weaknesses. If we are zone pressuring out of Cover 3, we understand the flats are weak in both quick game and in the jet and rocket series.  We can bring the same pressure but by cheating the corner we can be solidify the flat.