Play the call! That is the calling card of the defense we have been trying to build over the past several years.  Defense on our terms is what we preach.  From day one, we focus on set recognition with alignments and assignments for every possible formation we may see.  We follow as few rules to cover as possible, adjust to the offense as little as possible and use the very drastic hash marks of the high school football field as another defender.  This overall philosophy has allowed us to send 6 players, even 7, the majority of our snaps on defense.  In high school football, I have always believed that overwhelming the point of attack, putting as much pressure on the offense as possible will allow to dictate and control the flow of the game.

Ironically, my love for pressure defense came from the mismatches and angles that can be created from a 3-4 defense.  But at the high school level that 3-4 scheme felt like an old school 50 due to the inability to stop inside zones and spread offense with a 3-2 box.   In studying the 4-3 we found that we had great angles to cover all underneath timing throws while maximizing our pressure and overloading the point of attack.  Since that time, we have implemented a multiple front, multiple pressure attack stemming from our 4-3 numbering system.  Since I implement a multiple front attack with movement between linebackers and defensive lineman on 80% of the snaps, a numbering system seems to be the easiest way to get calls into the defense.  Trying to keep things as easy as possible so I can relay the call to the players, numbering them can give them the most specific information in the fastest amount of time. Over the years this has worked extremely well for our players to process and play fast, without having to memorize more words.   So each defensive snap the players get signaled the front, which they must memorize, with the pressure.  A call can be a base 2 bingo 4 crush which is a 6 man pressure with movement or as simple as me making the signal for our combo front which is a 6 man line. Our blitzes are universal to all fronts, causing 6 blitzes to be executed 70 plus different ways.  This concept combined with our never changing coverage rules allows us to dictate to the offense and simply play the call every snap. 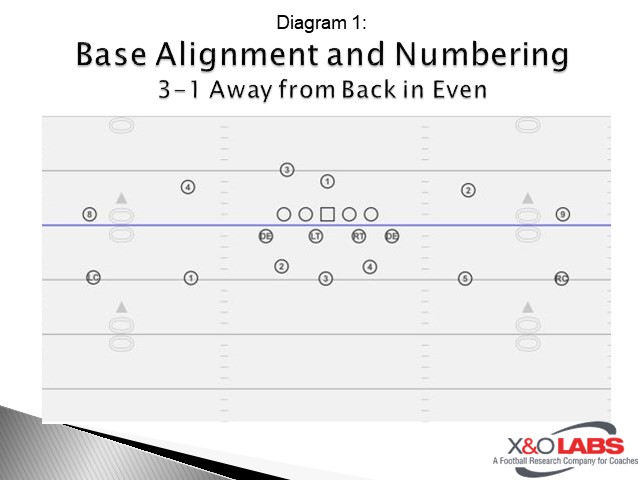 Numbering our safeties with a 1 and 5 stresses to them that we want them to play like a DB and think like a LB.  We look for a long lean player that can play in the box and bring pressure as well as be a visual obstacle for the QB in that alley between the detached receivers and the line.

The 2 linebacker is the most physically stout of the LB’s especially against the run.  Most teams are right handed.

The 3 has the most difficult job on the field.  First he must dominate between the tackles in run defense as well as cover tight ends and crossing receivers like a free safety in a 4-2-5 all while playing at 5 1/2 yards from the ball.  If we send pressure and hit are aiming points correctly his depth is fine because the QB will not have time to get the ball deep down the middle.  His long passes will be fades to the outside which sounds like a jump ball to me.

The is our best edge rusher and most impactful LB on the team.  He plays on the edge and on the line in a variety of different fronts.

Our linebackers play hand in hand with the 1 and 5.  At times the front can look like a 4-5.  In a pro set like you see in diagram 2, the 1 and 2 combo the coverage on the TE and any back coming out of the backfield.  If the TE releases into the flats like an arrow concept, the 1 is there.  If the TE has any vertical release, the 2 will cover him with the safety underneath.  A perfect throw can give the 2 a very hard time.  High School QB’s don’t always make the perfect throw and read.   Diagram 2 shows 9 men in the box without any blitzes called.

Corners in this defense are cover men and are put on an island quite a bit.  The main focus is to protect timing routes and have string edge and under coverage challenging the offense to go deep and complete long passes with defensive line movement and pressure right in the QB’s face.  the percentage of completion will not be very high and as long as the corner plays solid techniques and keeps the receiver in front of him, I will live with the yardage gained on low percentage plays. 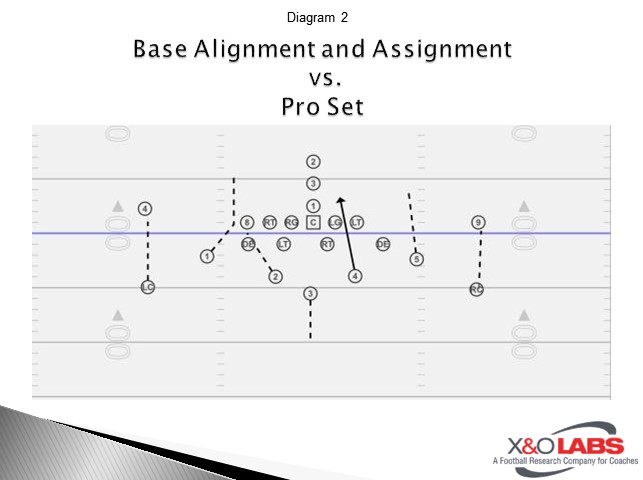 Diagram 2 also shows the 4 linebacker on a fire (a straight line blitz).  The call into the defensive huddle was a simple base, but our combo rules has the 4 on a fire because there is no eligible receiver for him to cover, Free to Fire.   The 3 has middle of the field because his rules states if Free drop Five.  The 5 will have the slant/swing lane.  Pressure, pressure, pressure.

Once again the objective is to maximize the pressure while playing the call in the huddle and not adjusting our defensive scheme given an offensive formation.  We simply need to know who and how to cover on any given situation.