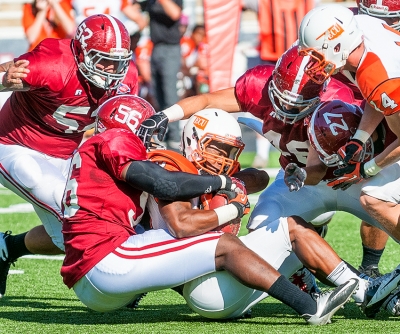 Editor’s Note: Carey Baker has been the defensive coordinator at Henderson State University since 2010 where the Reddies have won three conference titles and made two Division II playoff appearances.  Baker previously served as defensive coordinator at the University of Charleston (WV) and Southern Arkansas University.  He was also a graduate assistant at Southern Miss and coached safeties for Georgia Southern on its  I-AA National Championship team in 1999.

Back in 2007, I began experimenting with an ultra-light personnel on defense for passing situations.  We were basing out of the 4-3 and running an extensive amount of 3-3 stack on third down.  What started out as some 3-4 blitzes evolved into a two down-linemen package we call Panther.  Panther is essentially a 2-5 with a 2-Shell behind it.

The personnel elements of Panther are two down linemen in head-up 2-techniques.  We call them Tackle and Nose.  We have two stand-up OLB’s that we call Sam and Will.  The Sam and Will are our best pass-rushing LB’s and are thinking rush first.  They will box (contain) any kind of run.  Several of our Wills have defensive end backgrounds from the 4-3 but have become Wills in our 3-4 and Panther groupings.   Our Mike linebacker is stacked over the center.  There are two hybrid LB/DB’s we call the Nickel and the Panther.  The rest of the defensive backfield is our normal two corners, strong and free safeties aligned in a 2/4 shell.

The base alignment for Panther is a 2-Man alignment.  The OLB are in two point stances as if they might rush or drop.  The Nickel and Panther cover up the #2 receivers as if in man coverage.  The sell the alignment, it is important to play 2-Man often (Diagram 1 – Base).  However, the true beauty of Panther has been the variety of pressures with the Nickel, Sam, Mike, Will, and Panther as potential rushers.