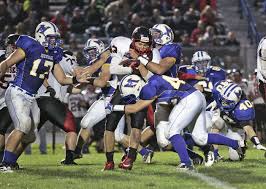 From the flex bone to four wide, double tight to empty, or up-tempo to shifts and trades; developing a pressure package that is both effective and sound week-to-week is becoming more and more difficult. All challenges aside, there is an answer. For us, it starts with solid zone coverage and the ability to bring 5 or even 6 man attacks that you can use week in and week out is one way to keep improving daily. This prevents the “defense of the week” approach that will inevitably be a recipe for disaster.

At Mukwonago High School (WI), we have hung our hat on multiple zone pressures. Pressures that are installed in mini-camps and pre-season that we feel comfortable with against any offense we see throughout the course of the season.

Performance Alignment: Because the defensive linemen have to travel longer than a traditional slant, they may need to adjust their stance. These adjustments include backing off the ball, narrowing their stance, or moving to a head up to inside eye alignment. These changes vary based on the player as they all need to use their own abilities to get to where they need to be. We have found some of our quicker or longer leg players prefer to line up wider. This adjustment makes them travel further; however this gives them more of a chance to read their keys and adjust on the run.

Eyes: Once aligned, the long stick defensive lineman must have his eyes focused on the near hip of the adjacent offensive linemen.

First Step: On the snap, the defensive lineman will take a flat step rotating their foot, knee and hips so they are all facing the sideline. Next, he will throw his movement side arm backwards to get his lower body and hips rotated. This skill is very similar to the first step of a pulling offensive lineman. He must be sure to keep his eyes on his key, which is the adjacent lineman.

Second Step To: The second step is the most crucial step in the movement and it is all determined by what his key does. As the player takes his first step and gains ground down the line of scrimmage, he is reading the offensive lineman and the direction he is headed. If the key comes to block him, which could be a zone to him, out block at him, or slide protection to him, then the defensive lineman must continue to gain ground and possibly lose a little depth in order to get to the next gap. He cannot get cutoff.

Third Step: The third step must get on the ground quickly and redirect the defensive linemen up field in his gap. On his third step he must have his feet, hips, and shoulders facing and moving in the direction of the line of scrimmage (Diagram 1). 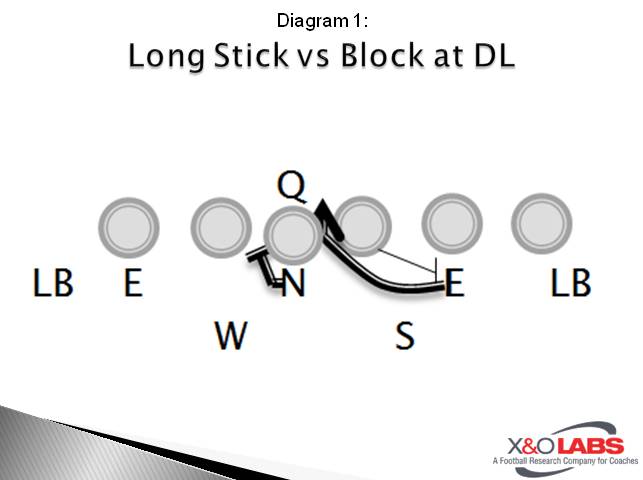