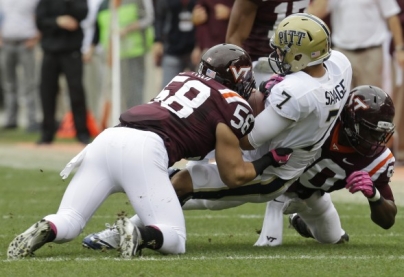 In this case, we will present our research on the most common pressure checks against various offensive formations and personnel groupings.  According to our research, 74 percent of coaches choose to pressure certain formations and personnel groupings, more so than any other variable.  While this may be true, we found it necessary for coaches to be efficient with teaching their players formation structures before installing their check system.  Many of the coaches we spoke with when conducting our research said that they will install all of their various types of pressures- field, boundary, tight side, open side, etc. before getting into specifics about formations.

When we started to conduct our research on attacking formations/personnel groupings we’ve found coaches have two separate philosophies on identifying and pressuring formations:

Chris Ash, the defensive coordinator at Ohio State University, subscribes to the latter method of blitzing surfaces.  “A lot of what we do is based off formation- Tight End, open side and back,” said Ash.  “If we can gain an advantage by blitzing the formation than we will do it.   If there isn’t an advantage we can find then we won’t.” In Ash’s system, he’ll use a code work like Yankee (Y) to blitz the Tight End and an “Oscar” call to blitz the open side, which would be an entirely different blitz.  He will also have a bird check which means blitz the back.  “The question is how much can they manage?” asks Ash.  “If they are the same blitzes each week, you can scheme more.  But if you’re starting to scheme new blitzes each week, I think that’s when you get yourself into trouble. “

Wallie Kuchinski, the defensive coordinator at the University of St. Thomas, a perennial division three powerhouse, teaches his players to attack two types of surfaces:  a Tight End surface or a two-back surface. Kuchinski told us that 35 percent of his pressures are checked at the line of scrimmage, but at least 70 percent of snaps he will have his players run some type of pressure based on what the offense presents structurally.  “I call blitzing attacking protections but our base package in run downs we send five (out of St. Thomas’s odd front) so I guess that can be called a pressure as well,” said Kuchinski.   When he teaches his players formation structure, Kuchinski classifies formations into the following groupings:

Tom Mason, the defensive coordinator at Southern Methodist University, sees upwards of 68 formations per game so he talks more about triangles rather than surfaces.  Mason will pressure about 70 percent of the time and will check his pressure 20 percent of the time.  He uses four blitz checks out of his 3-4 front.  “The hardest thing for a coordinator is getting caught in a blitz against a formation that you don’t want to be in,” said Mason.  “So most of the blitzes will be dictated based on Tight End or running back.  We talk in terms of three triangles:  We are going to blitz from the strong triangle (Diagram 1), the weak triangle (Diagram 2) or the middle triangle (Diagram 3).  It gives you a chance to get you in something that you will have success.”  Mason made a point to say because SMU’s head coach June Jones spread offense doesn’t revolve around a Tight End, so he works more on pressuring those three-man surfaces instead of defending them.   “I have enough confidence in our cover down rules that I’m going to bring pressure the way I want it,” said Mason.  “I’m not going to let an offense dictate what we do.”