Editor’s Note:  X&O Labs Senior Research Manager Mike Kuchar spent time this spring at Kean University (NJ) talking with head coach Dan Garrett and the rest of his defensive staff about the Cougars 50 front zone pressures.  The Cougars finished 2nd in the NJCA in total defensive in 2012 and qualified for the Division 3 playoffs in 2011, the first in program history.

Much like many other successful coaches, one of Dan Garrett’s primary philosophies is that the process is more important than the result.  This can be true in many elements of football, but perhaps none more so than when installing pressure packages.  Too often players are so consumed with whom to blitz and where to blitz and losing sight of the entire concept of the blitz.  While this process may not be new to some coaches, it’s inherently built in Garrett who does everything methodically when implementing his blitz patterns.  According to him, this is a culmination of the schemes he learned current University of Miami head coach Al Golden when he was with the University of Virginia.

The key in any system is to play fast, so Kean uses a five-man pressure system with a three-deep, three under coverage system.   According to Garrett, he’s tried other concepts such as the two-deep system Wagner College uses (add Wagner College piece link here) but he felt it was often too much for his players to handle.    In either case there are main focus points he makes sure his players understand when implementing the zone pressure.  They are below: 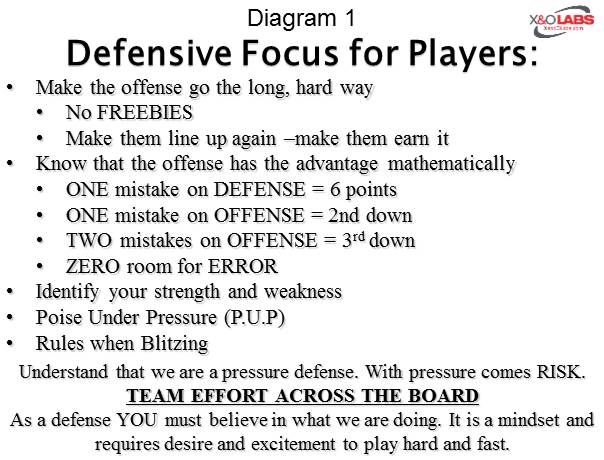 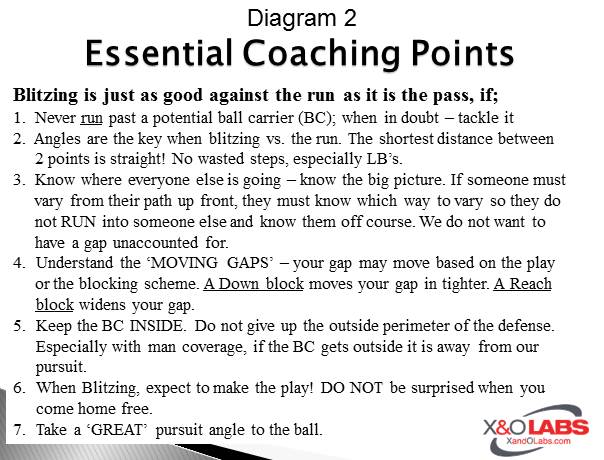 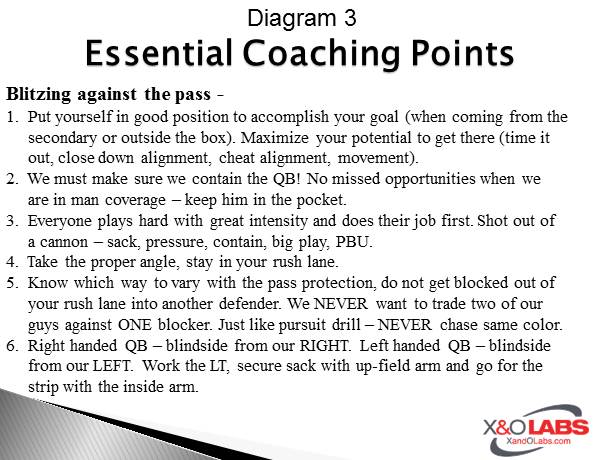 Something we felt Coach Garrett does with his staff is breakdown to his players the type of blitz angle they are on when they are sent.  We’ve seen too many players not understand how to blitz, often taking themselves out of the play by the time the ball is snapped.  In order to alleviate this, Coach Garrett gives his blitzers the following aiming points:

The key to the coverage is the post-snap movement of defensive backs to get into position to play the ball.  More specifically, Garrett teaches his Cornerbacks to key the "cradle" (carriage) of the QB, meaning the position that the ball is in during the QB’s drop.  If the ball is still attached to the cradle the Cornerback can continue his footwork.  Once the ball gets removed from the cradle, the Corner needs to be ready to break.  Kean uses more of a slide-back technique rather than a pedal because it controls the body movement so the Corner an break in any direction.  According to Garrett it’s essential that his Corners eyes do not stay in the backfield.  He has them key the QB for his drop.  For example, if the QB takes one big step, followed by a little step this would denote the possibility of a three-step drop, meaning the ball would come up high (in cradle) right now.  In this case, the DB needs to be ready to break.  Two big steps simultaneously would equal a five-step drop- where the DB would have a little more time.  The specific techniques in which Garrett drills his Corners on are below: 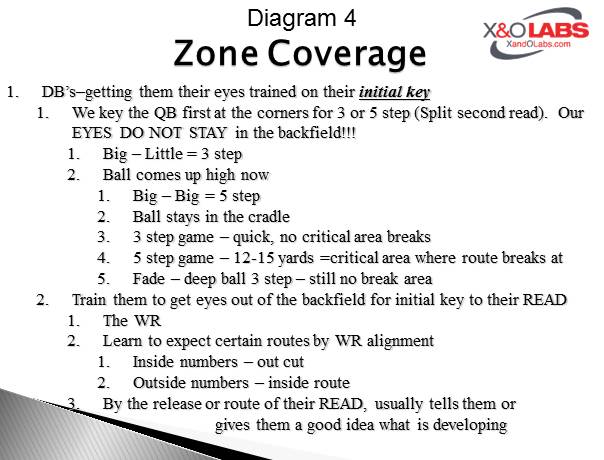 While the Corners will usually be playing the number one receivers in Garrett’s system, time has to be spent defining the other coverage zones in the three-deep, three-under pressure concept.  While all coaches, have their own definitions and verbiage of this coverage, Garrett’s terminology is below: 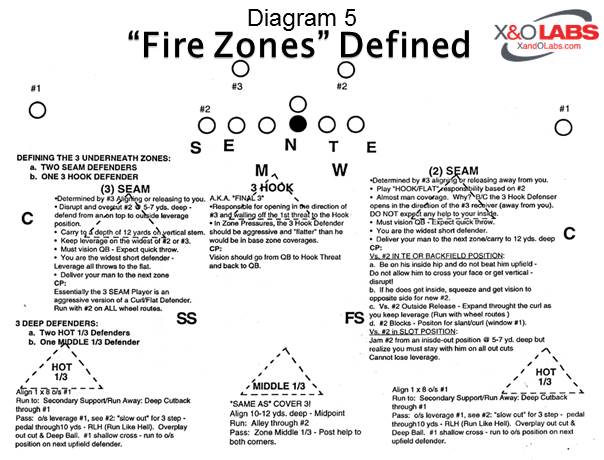 Once Garrett and his staff teach the coverage zones of the pressure, he progresses into how he controls the blitz.  Controlling the blitz simply means calling the pressure based on what tendencies you see from your opponent.  Garrett will game plan his blitzes based on offensive tendencies and formations.  According to Garrett one of the benefits of the odd front pressure scheme is that both sides are mirrored.  This helps with any change of strength or motion.  Whatever pressure you select, both sides of the defense need to be prepared to execute it- depending on the offensive formation.  "Certain offensive coaches do certain things and now you can neutralize or attack those tendencies," said Garrett.  "A high percentage of the time you will be right- at least much more than you will be wrong.  It takes proper homework on your opponent."

The concept of the tag blitz puts the defensive coach in control of where the blitz is coming from.  Kean University’s zone pressures attack four particular offensive elements:

When Coach Garrett implements the pressure patterns, he uses the whole, part, whole methodology by just putting up X’s on the white board or having random players stand-in on the field during walk-through’s.  He pairs the Open or Weak blitz with the Closed or Strong blitz so that players are mirroring each other.  In the example below, Garrett is using a four strong (or weak) concept. 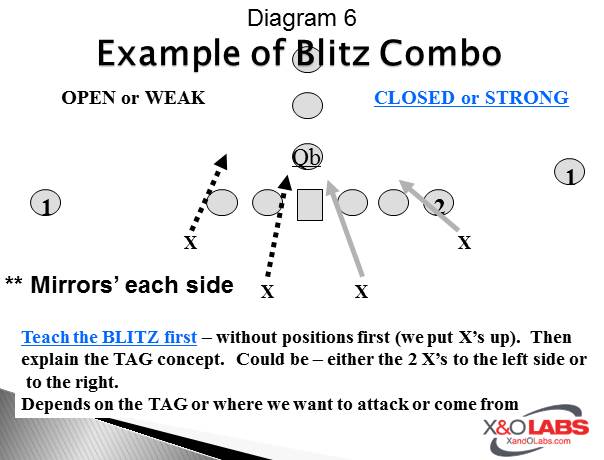 Once he feels if his players understand the concept, he’ll progress to adding defenders based on position into the pressure. 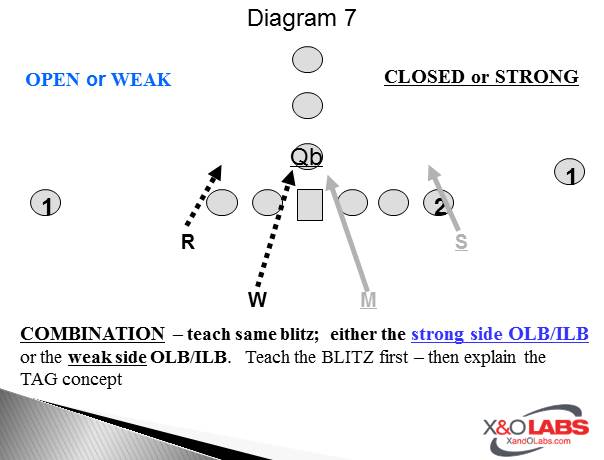 In the next example, Garrett now will progress to change-up the blitz to an alternate side pressure, where one outside linebacker will blitz with the opposite inside blitz.  Again, this is done in a mirrored fashion with "X’s" so players understand the concept. 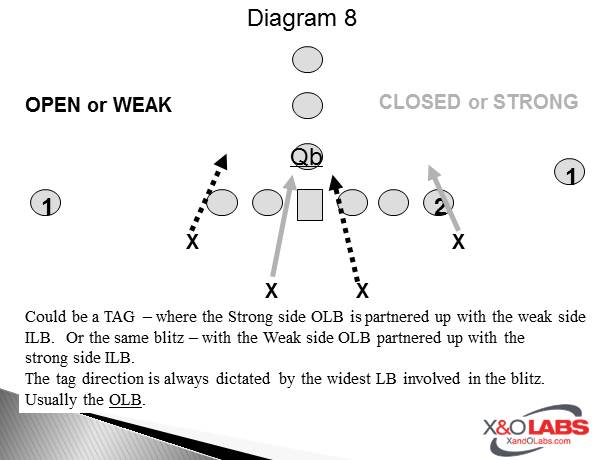 Once he feels as if his players understand the concept, he’ll progress to adding defenders based on position into the pressure. 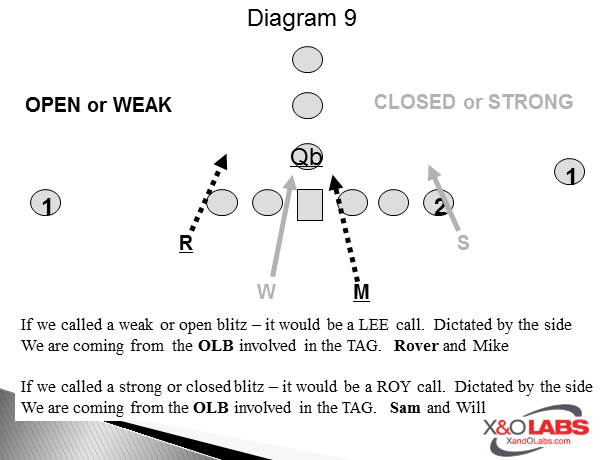 Like many other coaches, Garrett introduces his zone pressure concepts ag