Montclair State University is a program rooted in successful tradition. One of the top Division III programs in the Northeast, the Red Hawks have been playing football for 87 years and head coach Rich Giancola has been coaching for 37 of them. He’s the active NCAA Division III leader in wins, compiling a 239-121-2 mark since taking over in 1983. Defensive coordinator Todd Agresta has been with Coach Giancola for 20 of those 36 years and it’s no coincidence that for 10 of those years the Red Hawks have been in the top three in the conference in every major defensive statistical category.

Like most successful program, they believe in what they do defensively and what they do is play with a middle of the field safety on over 85 percent of snaps. It’s a philosophy that Coach Agresta has developed and refined to defend the modern RPO offense. “I just believe in having a post defender,” he asserts. “I don’t feel comfortable with the teams we play playing with two safeties. You still need to stop the run. Our run fits are easier and it’s easier to teach.”

While the coverage can routinely change, one thing will not: there will be a safety in the middle of the field. And at the hierarchy of the Red Hawks defense sits its bread-and-butter coverage- Rip/Liz Match, or what Coach Agresta calls “Cover 9.” It’s the latest off shoot of man vs. zone, it looks like Cover 3 when it needs to and it looks like man coverage when it needs to look like man. It’s a coverage commonly associated with five-man pressure defenses and Montclair State runs it just as good as anyone.

Editor’s Note: Due to space issues, this report is designed exclusively around the coverage aspects of Rip/Liz match.  X&O Labs already devoted an entire report on how to fit the run with this coverage with the University of St. Thomas (MN).

The genesis of the Red Hawks scheme is based on an Odd front with the following denominations: 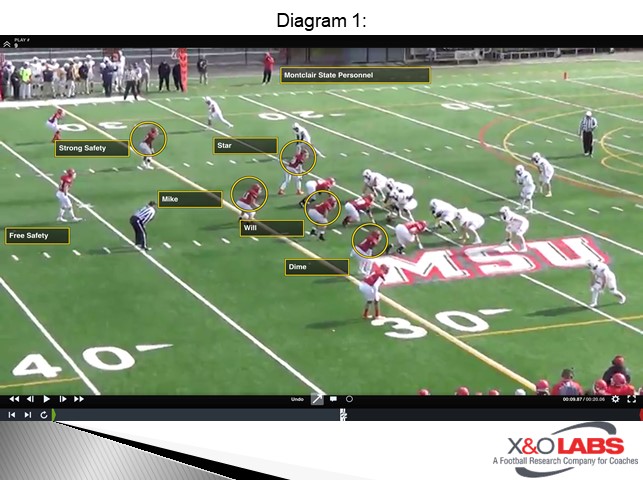 While Coach Agresta modeled his defensive scheme around the New England Patriots, he calls his outfit a “junk front,” which can align in various positions along the line of scrimmage. These fronts can transition into the following: 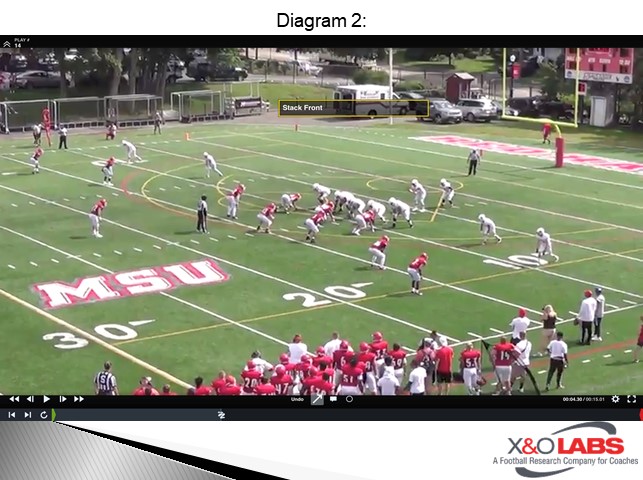 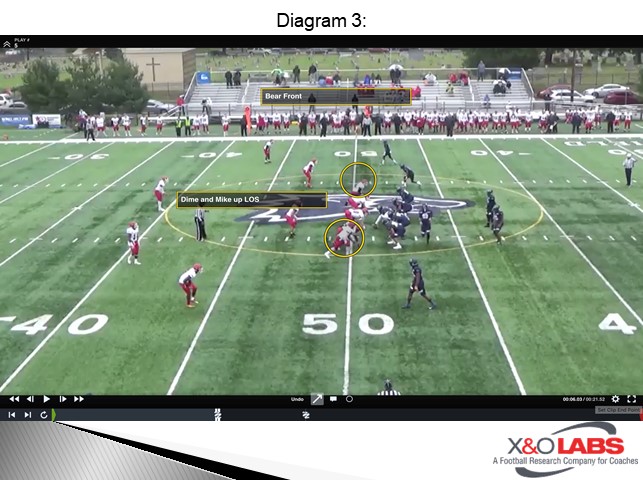 There is a myriad amount of pressure patterns that can be devised with this coverage, so we wanted to first spend time detailing the technique associated with each of the coverage defenders in Rip/Liz Match. The defenders in this coverage consist of the following:

According to most coaches, including Coach Agresta, the key to making the coverage efficient is a cross-training approach so that each back-end defender (LBs and DBs) understand how to play each of the above coverage concepts. It’s why the defensive staff at Montclair State spends the majority of spring practice (D-III is non-padded) working how defenders relate off each other. “Communication is the key to this coverage,” he told us. “Which is why we have buzz words for each scenario.”

While, we will provide the vocabulary behind the communication when we present the pass concepts that affect this scheme, we wanted to provide an overview of the responsibilities of these defenders.

In most situations, these will be the corners, the “Hawk” or left corner in the Red Hawks scheme and the right corner. In this system, the divider rules are the numbers. “If the wide receiver is outside the numbers, we’re 1x6 (one yard inside, six yards deep),” said Coach Agresta. “If the wide receiver is anywhere on the numbers, we will be head up the wide receiver at 6 yards. If he’s inside the numbers, we’ll be one yard outside and six yards deep.” Coach Agresta breaks down the post-snap read of the corner based upon the drop of the quarterback. “We will read the drop of the quarterback, mainly from shotgun alignments because that is what we see,” he told us. “If the QB catches and sets it’s a three step drop. In three step our eyes go to number one because we don’t get any shallow routes from that action. If the QB is taking three steps, it’s a five step drop for us. When I see five step, my eyes go to one and we pattern read off of that.”