3 Fire Zone Blitzes From the Under Front 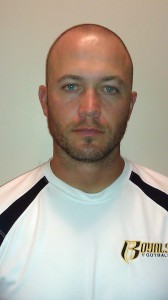 Editor’s Note:  Eric Jones played for Weber State University in Ogden, Utah. After college he spent 5 years as a Linebackers coach and Special Teams Coordinator at Woods Cross High and Syracuse High. Last season was his first year as a Defensive Coordinator at Roy High School in Roy, Utah.

In this clinic report, I’ll be describing our approach to installing and using fire zones within our 4-3 defensive scheme. First, we base our defense primarily out of the Under front.  All of our fire zones, which I call Dogs, are used from the Under front. I prefer strongly to run my Dogs when the ball is on a hash mark. This doesn’t mean they can’t be run from the middle of the field, but I’m more comfortable when the ball is on a hash and I’ll explain why in later in the article. I’m all about simplicity so we only install three fire zones. However, using a simple tag word for each Dog, we can show up to 6 Dogs without much hassle to the original three. We run a Field Dog, Short Dog, and Pipe Dog. I’ll detail each below.

Field Dog (the common NCAA fire zone) is my favorite Dog in the litter. It’s simple, effective, easy to teach, and safe to run. With the ball on a hash mark, I’m always looking for situations to bring pressure. I won’t blitz much if our "base" defense is getting the job done. However, I’m not shy about blitzing if we need a momentum play or simply want to keep the offense on their toes. Some basic rules for our fire zones are as follows:

1) We always declare strength to the field.

2) The DL always slants away from where the blitz is coming from.

3) The boundary side DE is always the dropping lineman.

4) The blitzing LB’er will always blitz the gap originally covered by the DT on his side.

My huddle call would be "Under Field Dog 3." We call it Field Dog because the pressure is coming from the wide side of the Field. Therefore, the DL will align in an Under front and slant one gap away from the Field. I know this is contrary to many fire zones out there. The current lingo with many universities involves landmarks such as Long Stick, Radical Slant, Hot, Inside Rush, and Outside Rush. That’s how I learned them in college but I’m not comfortable using those concepts with high school kids. So we simply slant one gap away from the call. That means the field side DE slants from his 5-technique to the B-gap inside of him. The Nose slants from the field side A-gap to the boundary side A-gap. The 3-technique Tackle slants through the inside hip of the boundary side OT and continues working for contain. The boundary side DE takes 1-2 read steps up field to decipher run or pass. If he reads run, then he plays run by setting the edge into the boundary. If he reads pass, then he drops into the boundary side flats. His goal is to take away the quick passing game to #1 and then react up the any swing routes by the back into the boundary.

The two blitzers that are active with Field Dog are the Sam and Mike linebackers.   The Sam is blitzing outside the EMLOS from the field side. He aims at the deepest shoulder of the deepest back and must not let the ball or QB get outside of him. The Mike backer is blitzing through the field side A-gap where the Nose is vacating. For coverage rules, both Corners are playing a press-bail technique. They align pressed initially and bail to a deep third during the cadence. We aggressively squeeze slants and posts. Anything that releases hard inside we will back off and play over top of #2. The Strong Safety becomes the Curl/Flat defender by replacing the blitzing Sam backer. In our base Cover 3 scheme and in our Dog scheme, our Curl/Flat defender uses the SCIF (Seam to Curl to Flat) technique. That means the SS will align and play off the #2 receiver to the field side. The SS will play #2 man-to-man on any vertical or outside releases. The SCIF defender can release any shallow inside route to the "Gut" defender. If he releases the hard inside route, then he’ll zone off underneath the #1 receiver. The Free Safety rotates to the middle of the field and plays the middle third. He’s a typical middle third defender and aligns over the #3 receiver in the formation.