Bethel University and defensive coordinator Mike McElroy utilize primarily a one-high defense that bases in Cover 3 and variations of Man-Free.  To compete in the ultra-competitive MIAC, Coach felt he needed a pressure package that would enable them to be aggressive in having the ability to send six but not live and die playing straight man coverage without deep middle help.   Coach McElroy felt the best way to be able to bring six but be safe in coverage is to play 2-under, 3-deep coverage.  Bethel will employ this mostly of out of dime personnel with some more speed on the field upfront.

Bethel is a Man Free / Cover 3 team.? Defensively, everything they do is disguised out of a Cover 1 look.? This 3 under/ 2 deep look is a great compliment to cover 1/3.? Before the snap, the objective is to make it look the same.? It’s a pressure package that is also ideal against the run.  Bethel also likes to run this in the red zone (the coverage adjusts slightly), or end of the half - end of the game (coverage adjusts as well).? They can call it based on back alignment, passing strength, boundary or field.? It is tagged as such.? For Bethel, it was mostly used as a field/boundary tag.? By doing it this way, Coach McElroy, says it allows his guys to avoid confusion caused by trade, motion, back flip or pistol vs. under center. Coach believes in calling it and playing it so his guys can play fast and nasty.   Coach McElroy says, “Call it and Play it”.   Remember, that this will only be called with certain offensive personnel groups and in certain down and distances; therefore, Coach McElroy is confident in his call.

There are three base pressure looks that Coach McElroy likes to employ out of this package.  We will look at the coverage first and then go over the Pressures.

The coverage behind the six-man pressure is 2-under and 3-Deep.  Remember that this will be from the disguise of Cover 1.  The Corners will be responsible for the deep 1/3, the Fs will have deep middle and the Q/S will be the two underneath players.   The coverage will not be great against the quick game to the flat.  That is the reason Coach will only call this in longer passing down situations.

The coverage behind the six-man pressure is 2-under and 3-Deep.  Remember that this will be from the disguise of Cover 1.  Corners will align over the #1 receiver and give the illusion of playing press man. Ultimately, they will bail on snap and be responsible for the deep 1/3.  This coverage wants you to throw it to the deep 1/3 to the field.   Corners will be over the top of every possible route, always giving up the hitch or quick out route. If there are two verticals from a detached two receivers, the corner will play his base Cover 3 divider rules that is taught Day I of the defensive install.  Coach McElroy uses the term "two speeds', meaning two fast guys if there are two fast guys to your side the corner will sprint to his divider rules.  The corners are taught they have any vertical of 1 and 2 and will sprint to anything else.   If there is a trips formation the Corner will be locked man on the single side Wr and is taught to squeeze the WR. 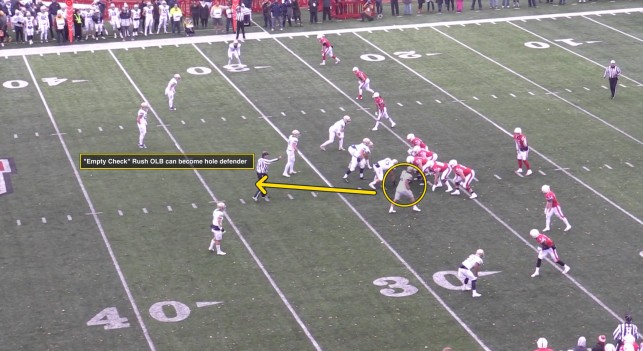 The two underneath players are the Q, the downfield Strong Safety player, and the weak safety called the S.  The two underneath players are taught to align inside of a detached #2 and have “Vision on the QB”.  These players are taught to read the “mesh key.”  Coach McElroy uses the location of the ball as the run/pass indicator.  If the ball is in the running back’s gut, they will bounce bounce waiting to see if they are needed in the run fit.  On the snap of the football, the Q and S are "bouncing".  They will bounce in the spot they are aligned until they have their movement indicator.  On a pass read, they are expected to turn and run to the Quarterback's front shoulder. Coach tells his guys they should be sprinting 8-10 yards on any pass not directly at them.   If #2 is a TE then the Q/S will align outside of him and still play his vision rules trying to get in the window for a quick out-breaking route.

If the offense comes out in trips, the trips side underneath player will split the difference between #1 and #2 and play his base rules of seeing the QB and breaking on the shoulder. Coach teaches his guys to react to the splits of all the receivers and react accordingly.  A key coaching point that Coach McElroy tells his guys is that if the QB is looking at you then he is throwing outside of you.  This tells the overhangs to get the width.

Trips away from you will look to get more middle of the field and take away the deep shot to #3 from the opposite side of the formation.  Coach tells these players they are leverage of two players, and if there is no #2 to your side then get to three right ways.  This is very similar to 425 terminology in special.

The Free Safety (FS) is the Post player and must take away the post.  Coach McElroy teaches the FS to scoot on the snap of the ball.  They will take three shuffle steps making sure the ball is cleared out of the mesh point and then he will get ready to play the pass.  The FS will play at a depth of 12 yards and will lean toward the field with his hips open to the QB so he can shuffle.