At Manhattan High School (KS) hot pressures only make up about 10 percent of snaps, but that doesn’t negate the efficiency of the concept. For defensive coordinator Adam O’Neill these pressures are a mainstay in “possession and ten” downs or heavy run tendency downs. The intent is to hit home runs in early downs by making tackles for loss. It’s an added benefit against 11 personnel Y off structures or heavy inside zone teams and the pressure concepts mesh well with the fire zones and man pressure concepts in the Manhattan High School defensive system. Coach O’Neill is hesitant of playing pure man coverage against open sets or quarterback run game, so his hot package is a good alternative against these schemes.

These hot pressures are used mainly as “shot pressures” to hit a home run on first down. Coach O’Neill relies on his prep work to call this on the right down, distance and field position. For downs with heavy pass tendencies, the coverage can easily be checked to man free. “I like cover one on pass downs but with the quarterback run I like zone coverage better,” he said. “Cover 1 and cover zero scare me in QB run game. Now at least we get zone eyes with a six-man rush.” Coach O’Neill terms these pressures similar to his fire zone pressures with one main distinction. Five-man pressures are termed by superheroes (such as Batman and Spiderman) while six-man pressures are termed by superhero groups (such as Suicide Squad and X-Men). The extra grouping is taught to accentuate an “extra defender” in the rush. “It just makes sense with players that way,” he said. “They just need to know the bucket to understand the coverage.” 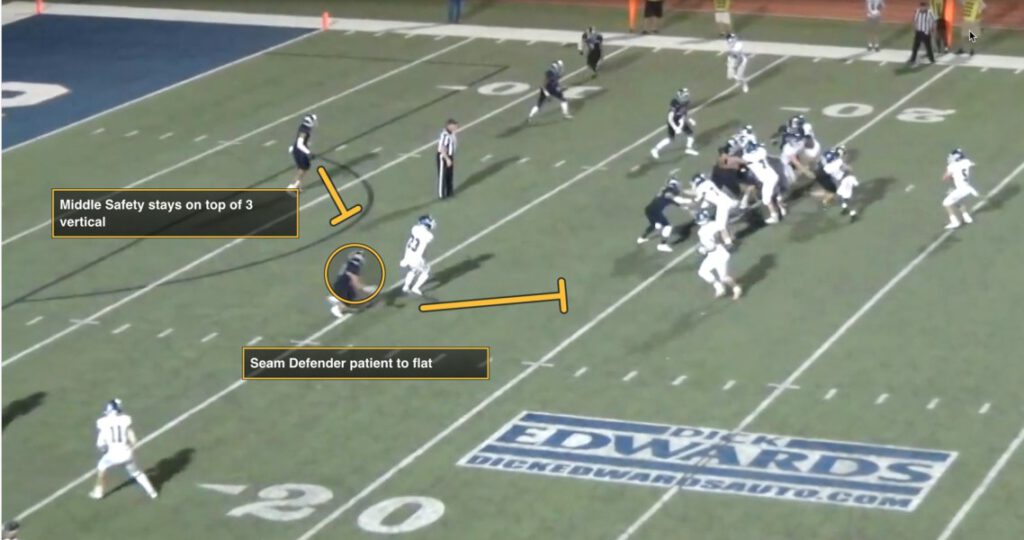 One of the carryovers in this scheme that is similar to fire zones is the corner technique. They are taught to plant and drive with their butt to the sideline. As Coach O’Neill says, the corner is going to take away the quick game with alignment but will bail out with zone eyes on the quarterback. Corners should expect fade but break on any stop routes in front of them. "If the route turns out to be a fade, we just keep running with it and look to intercept the ball," he said. "By then the quarterback should be hit in the mouth. But if the ball is thrown underneath that's on me. If they complete balls and it doesn't turn into extra we are doing our jobs."

With only two pressure patterns in this scheme, the deep safety will often be the third level player away from trips in 3x1 or to the boundary or the Field safety in the field pressure pattern below. Coach O’Neill uses the same carryover as fire zone technique for that safety. So, rather than being a flat-foot reader, he will be more of a slow pedal player on the snap, getting his eyes on the QB/RB mesh. “It’s mainly for comfort purposes,” he told me. It’s a lot easier to start from depth and drop than vice versa. He is taught to insert late in the run game and be "slow to post" in the passing game. “We can be late on the run game because we are sending six. The pressure will be there. Don’t want to fly out of there." In either case, he will be responsible for number three vertical trips and should never open to the boundary in those formations.