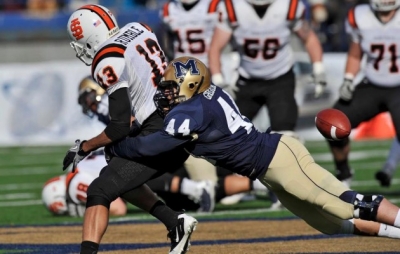 In our clinic report, we wanted to share two of our open front, three deep, two under zone pressures.The overall philosophy of this pressure package to be aggressive by bringing six man pressure.

The coverage philosophy is to have five sets of eyes on the QB and be able to break on his intentions; see the run and fit outside in (SCIF players); and have the ability to have “knock down” defenders if the ball carrier is to break free. We believe that these points lend this coverage to be better than a cover-zero man principled coverage. Because we are bringing six, we do not believe that the QB is going to have enough time to look the defenders off; get to his second read, or pump fake the defenders. Both of these pressures are installed as six-man pressure with no peel responsibility, however we do have the ability to tag each pressure to ensure peel contain.

The coverage principal for both of these blitz concepts is a 3 deep, 2 under zone, which remains identical in structure to our base press Quarters coverage scheme. The only difference between the coverages is the position responsible for being the post player and the SCIF players. Our pre-snap structure will look exactly like our press Quarters coverage. This blitz package is a tremendous compliment to our base package. We believe that the simplicity and aggressiveness of these pressures is the reason for their success.

The 3 deep, 2 under coverage principles are as follows:

The corners are responsible for their deep third. They must use a press-bail technique and have vision on the quarterback, while having an awareness of where their immediate threats are located. We tell them to bail to the outside shoulder of the #1 wide receiver to their side.

The post player will open inside and take two shuffle steps before committing to the post. He will also have eyes on the QB. If the QB throws the ball, the post player must break on the intentions of the QB.  Although he is ultimately responsible for the post, he will lean heavier to his near threat, which will be #2 or #3 depending on the formation. We expect the ball to come out hot, thus allowing him to be slow to the post and read the QB intentions.