“The Foster 5” – Innovation 1: Designing Pressures to Manipulate the Modern QB

"For a time, offenses got away from 3x1 open because of protection issues. Now they are using it more to either manipulate you down the middle of the field or to isolate your boundary corner. You have to protect him. You will not always get the matchup that favors him."
- Bud Foster, former Defensive Coordinator, Virginia Tech University

The Ideology: Varying Coverage and Insertion Points to Exploit Mismatches

Let’s start with a foregone conclusion: Bud Foster loves to pressure offenses. That has never changed. But how he decides to manufacture pressure has been a continual development in the mind of the legendary defensive coordinator. We’ve all seen the grainy footage of Virginia Tech’s Whip Dogs and Cane Dogs of the early 2000s. If you haven’t, we’re willing to show it again. Those samplings are included in the Film Room section of this study. You need to see how Xavier Adibi and Corey Moore got after the QB. But his evolution now has come in the form of altering two main aspects of his zone pressure system: varying insertion points for his pressure people and building out the coverages on the back end.

He tells me that in a good year, he will be 15-18% zone pressures, 30% man free pressures, and 55% zone coverages. There are also be years where they are not a good pressure team so he will play more base. The difference lies in how many coverages are used to support them on the back end. “In any of our pressure patterns, we can play Cover 7, Man Free, Trap, Cloud, Robber, or Quarters he told me. “It can change week to week for us. It’s based on whether an offense is a run team, an RPO team, or a pure drop-back team. That is where we’ve been different.”

One of the more interesting things I garnered from my sessions with Bud is noticing how different he is in classifying his zone pressure system. Most coaches I’ve worked with classify their zone pressures based on the concept type and would follow this traditional format:

Each one of these categories will have a distinct amount of pressure patterns tied to it. For example, a “Bark,” pressure pattern would continually be with always be utilized with 3-deep, 3-under zone pressure coverage. But Coach Foster doesn’t classify his pressures in that regard. Instead, he’ll build coverages off the pressure pattern. And because he varies the coverage behind these patterns, most of his pressures are grouped by name, not by coverage. For example, a Whip (Nickel) zone pressure alone can be supported by several coverages on the back end. I assumed this could be confusing for players but the more time I spent with him the more I realized that players knew by alignment who was involved in the pressure. And that knowledge came with the understanding of the offensive formation presented. I’ll have more on that in the next section.

Like most coaches, Coach Foster teaches the back end of coverage before creating the pressure pattern. He is a self-reported coverage-loaded coach. “Our people have to understand invert coverage concepts first then we build our pressures around them,” he said. “It’s coverage first then we plug the blitz pattern in. You don’t mess with the coverage. You can plug people into the coverage.” This placement is the culmination of the process of finding mismatches in protection and coverage, both of which I elaborate on below.

But there are certain staples in Coach Foster’s zone pressure catalog that need to be understood before digging deeper into his methodology. The number one rule is simple: the first level must secure their gaps, either with their bodies or the bodies of their opponents. That is a non-negotiable and that wording is littered all over his 500-page defensive manual.  There are several pre-snap movement verbiages tied to his system, which is explained below.

Pressure defenders at the second level are either contain rushers or benders. Each of these responsibilities is below:

In most scenarios, the initial penetrator would be an outside edge defender and then LB would be contain. I’ve noticed many breakdowns in the technique of the D-crasher when I was sitting down with Coach Foster to not come tight enough down the line of scrimmage. He teaches this by using his Hoops Drill, which is available in the Film Room section of this report.

With a pressure catalog as extensive as his, I was curious to see how he assesses blitzers. He told me that although different years bring different personnel, he found that the Nickel in his system usually was a better pressure defender than a cover defender. This is why he relied more on them to pressure than to play more coverage. The same could hold true with the Rover. “It’s all about timing, anticipating, and the ability to slip blocks,” he said. “They need to play with good leverage and not be allowed to get pushed.” He teaches this by using his Skate Drill, which is available in the Film Room section of this report.

Bud felt that the hardest thing to get pressure players to understand is to make sure they have a plan before they rush. “Those second-level players can’t have hesitation,” he said. “The worst-case scenario is to bull rush or power rush the blocker but I don’t want to get run by the QB where he can dip up and run away. I want them to play fast. You don’t want QB’s to step up and attack seams, etc. It’s the same thing with our front four. We want to push the pocket with our defensive ends. There are different QB that can turn and run or slide out with vision downfield. We need to keep the launch point in a certain area and close the pocket. We need to limit the passing lane.”

He follows a progression when installing his zone pressure catalog. I include his complete fall and spring installation in the Appendix, but from a general standpoint he uses this framework:

“Once you have those patterns put in it just becomes concepts like insertion points, long pinches, and wipe techniques,” he said. “We would have a full run-through in practice to emphasize two back offense to get our base rules. Then we move to one-back offense. I want to get base fundamentals done.”

The man pressures described in Section 4 get installed first. Then, he progresses to teaching his zone pressures. We will follow the order below when detailing them in this section:

How he classifies these pressures has so much clarity, particularly for the defenders upfront. All of his field fire zones abide by the following outline below: 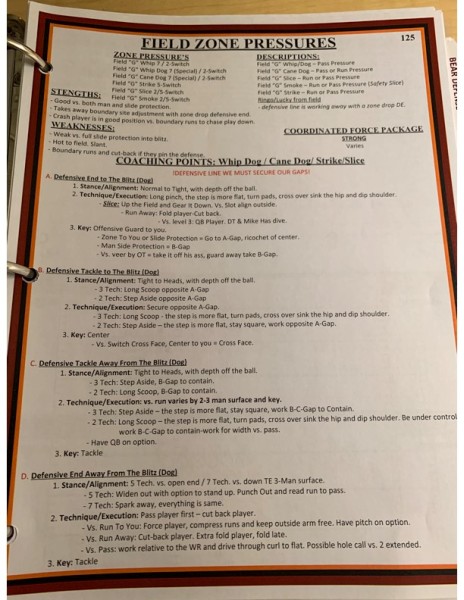 The field pressures are all the same to the pressure side. “It’s only different for the Nickel, Free Safety, and Mike linebacker based on coverage,” he said. There is a lot of text in that outline above, but essentially Field fire zone rules follow the format below:

What I wanted to do first is introduce these pressure patterns and when to use them. Then I’ll address how he went about altering the coverage structure behind them to attain mismatches in either protection or personnel.