Here is where Bud Foster’s innovation comes full circle. Ideologies 1-5 took you through the foundations of his system. This section is centered around the culmination of putting the pieces together to not defend, but attack offenses, which has always been his mindset. In this section, I report on how he takes the wealth of information in his operating system and applies it to attacking modern offenses. He calls it playing “anticipative defense” and I will tell you that many of these responsibilities fall on training his players during game week and on game day to make these adjustments and put themselves in the right position to make plays.

Having his players make these real-time adjustments became a necessity with the various tempos he encounters on a seasonal basis. To play anticipative defense, it was the players that had to interpret and communicate the checks. “Any indicator we can get (alignment, motion, split, cadence) is positive for the defense,” Bud said. “They line up a certain way for a certain reason, whether it be backfield sets, splits of receivers, alignments of tight ends or H backs, level of linemen. These are all indicators. I wanted to have our players know their positions so well that we are coaching them on offense, not a defense. In other words, they know an offense is running this because of this.”

Like much of what Coach Foster does, this process is all front-loaded in early spring and summer camp. Then it becomes a continual repetitive process he will introduce early and rep late during game week. This section is about how he sees formations, offenses, personnel, and how it devises his weekly check system to attack each of these.

One of my first objectives in meeting with Bud was to get his interpretation of how he sees formation structures, particularly as he begins his game-planning process. I wanted to explore how he sees surfaces, pre-snap alignments, and other offensive “pictures” when preparing to attack offenses. I wanted to examine how he envisions attaining structural and personnel weaknesses against offenses. He told me he will start his instructional process by introducing 21 personnel structures first and he’ll use more of a Socratic method when talking to his players about the possibilities of “breaking” each formation. “We’ll talk about what does this mean? What are the possible formations? What do we call them? Then we get into backfield sets. For example, this is an “I formation.” This is “King” (back strong) this is “Queen” (back weak). This is “Split Gun,” etc. You can’t assume players know anything when they get here. Some (players) are coached really well while others have no idea what a pin and pull run game is. So, they need to have formation awareness and recognition because we may want to check out of certain formations. It starts with personnel and formations.”

To say he is extremely particular about teaching formations may be the biggest understatement of my visit. He classified over four dozen in his defensive binder, simply too much to go into here. Of course, coaches are free to tag any formations how they’d like but the emphasis here is to name them, specifically. This way players can reiterate them in the same verbiage. After all, that is how language is taught. This is the progression he follows to teach his players to make the recognition and the corresponding adjustments during the heat of the moment.

Before getting into formation recognition, which is the bigger picture of the puzzle, I wanted to provide insight into the nuances of how he sees the pieces of the formation. Several of these touchpoints were addressed during our sessions, many of which lie in pre-snap alignments. He’s big on the recognition offensive splits, but I believe the difference is how he teaches it and how he has his players communicate it. He builds this communication around what he calls “color” calls, which are explained below:

“Red” Calls- These are run predictors when an offensive line is leaning forward in their stances. These are usually communicated by defensive linemen in front of them.

“Blue” Calls- These are pass predictors when an offensive line is indicating some sort of pass demeanor. These are communicated by the defensive linemen in front of them.

“Yellow” Calls- These are pull predictors, when an offensive line is indicating pull movement by leaning back in their stance. These are communicated by the defensive line in front of them.

He told me these were utilized heavily on non-consequential (first and second downs) where there wasn’t a huge tendency based on the scouting report. “That goes into our scouting report,” he said. “We talk about watching film and asking them why an offense had a big play? What did they do that made it good? Were there any indicators? Were they setting back in their stances?”

Aside from recognizing the alignment of the offensive linemen in front of them, defensive ends are asked to recognize the horizontal and lateral alignment of the sniffer. Communication is made on the following indicators:

“These sniffers bring different value,” he told me. “Some are fullbacks and tight ends used as blockers and some are athletes that they want to get the ball. You have to look at where they position them. Maybe there are coverages or fronts to use based on if they will use runs if he’s on the ball or off the ball. If he’s on the ball, we always anticipate some type of sweep game or power read game. If he’s off the ball, it can be more gap scheme oriented. Will he be an arc guy across the formation or a lead blocker to the point of attack? If so, we can chain our safeties off him or you can lock the safety down to the side of the tight end so he can track him.”

The following calls are used to identify the alignment of the sniffer as it pertains to the heels of the offensive line.

“Off” Call- Sniffer is set off the line of scrimmage. The predictors are insert zone concepts 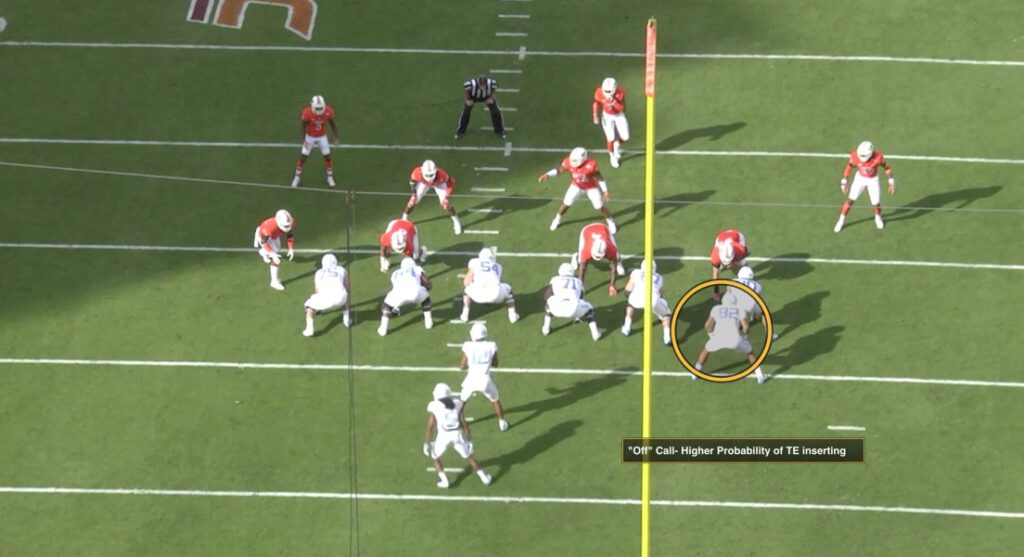 “Down” Call- Sniffer is down on the line of scrimmage. The predictor is wide zone concepts or concepts where the tight end will stay play side. 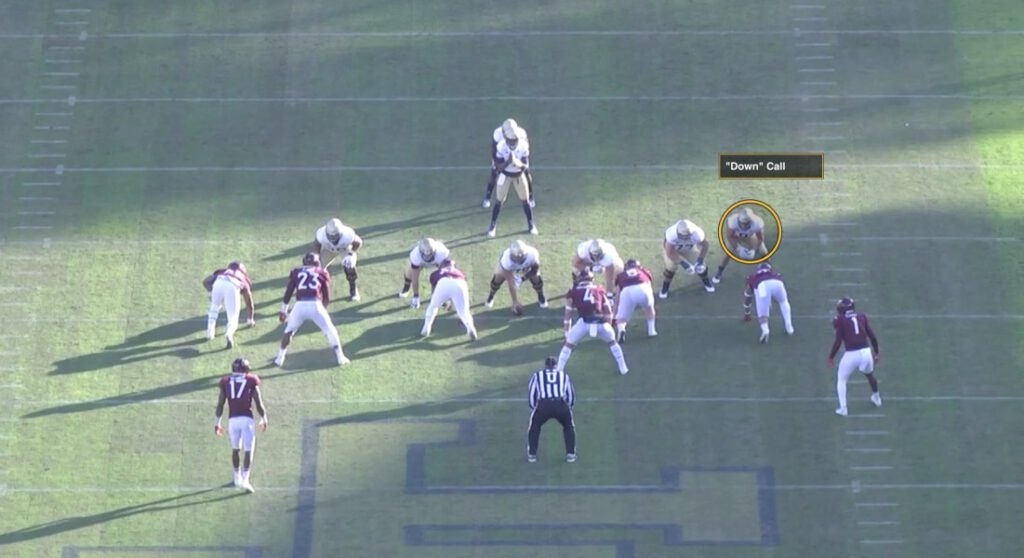 This gets translated to the alignment of the back, which is the responsibility of the Mike and Backer to each identify pre-snap. Each of the following alignments is communicated by that verbiage before the ball is snapped.

“Level 1”- The running back is even. Predictors are to expect fast flow, perimeter concepts, or pass. 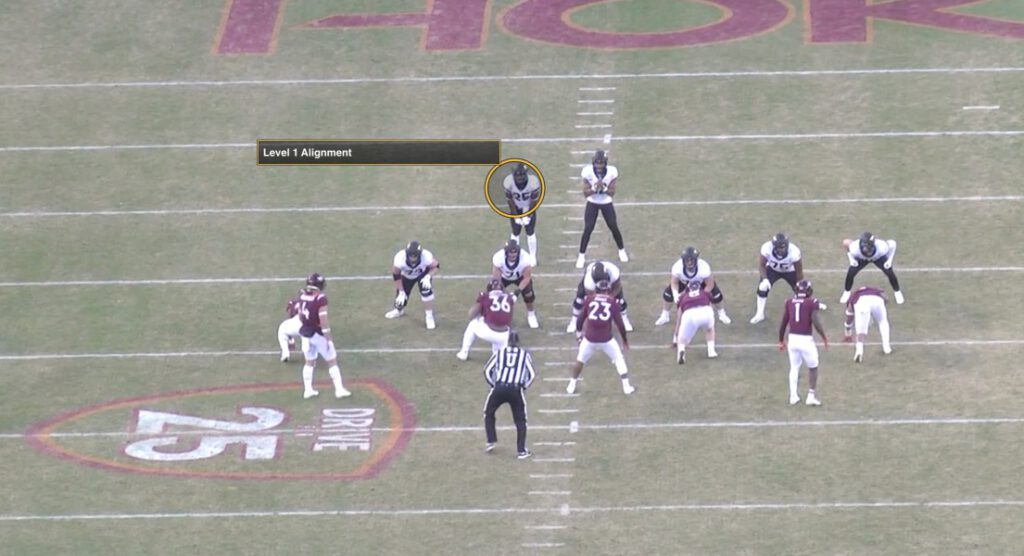 “Level 3”- The running back is deeper. The predictor is gap schemes or tight zone run schemes. 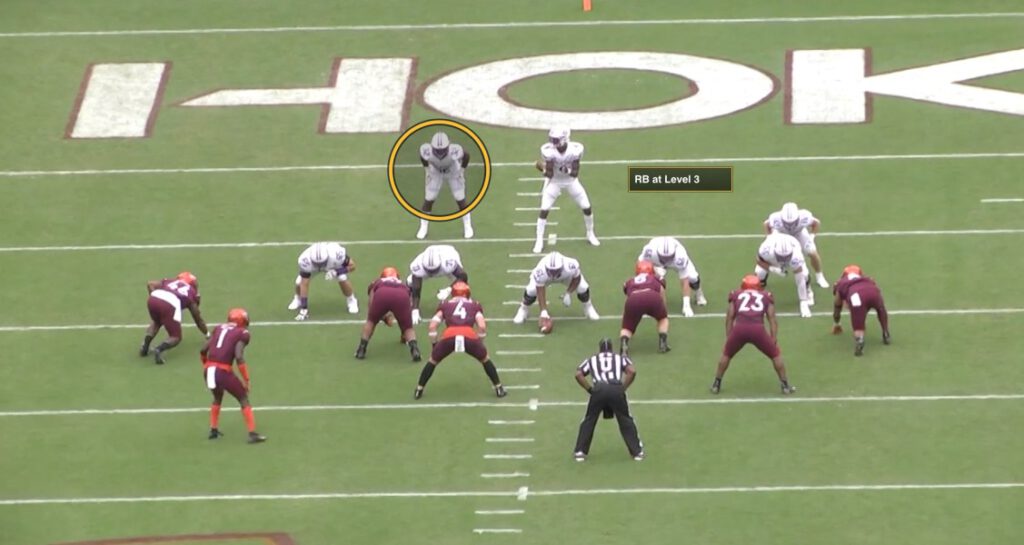 "Level 2"- The running back is between Level 1 and Level 3. No clear predictor. 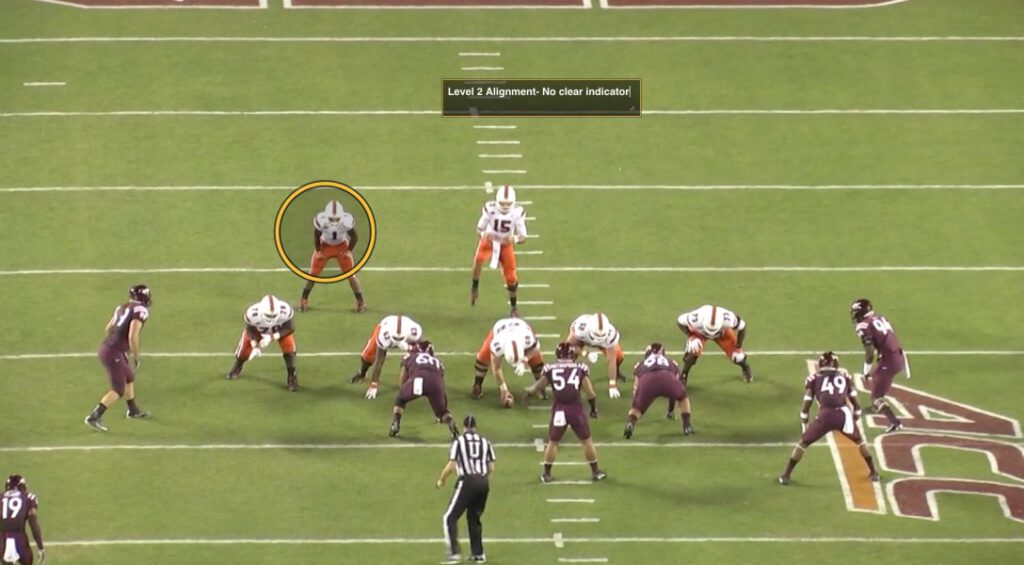 “Pistol”- Clearly, this is a lot easier to ascertain. There are no indicators of power read, though maybe pure power. Expect zone reads, wide zones, and stretch schemes. 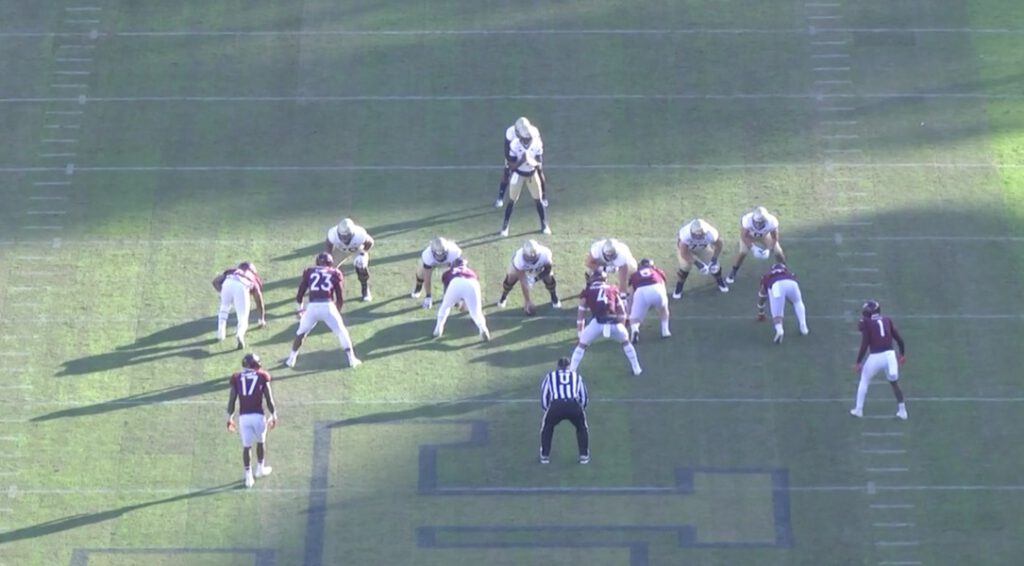 “Chow”- This means “Cheated Out Wide,” a predictor of the back being involved in the passing game. This would trigger those “Bingo” calls addressed in Ideology 4. 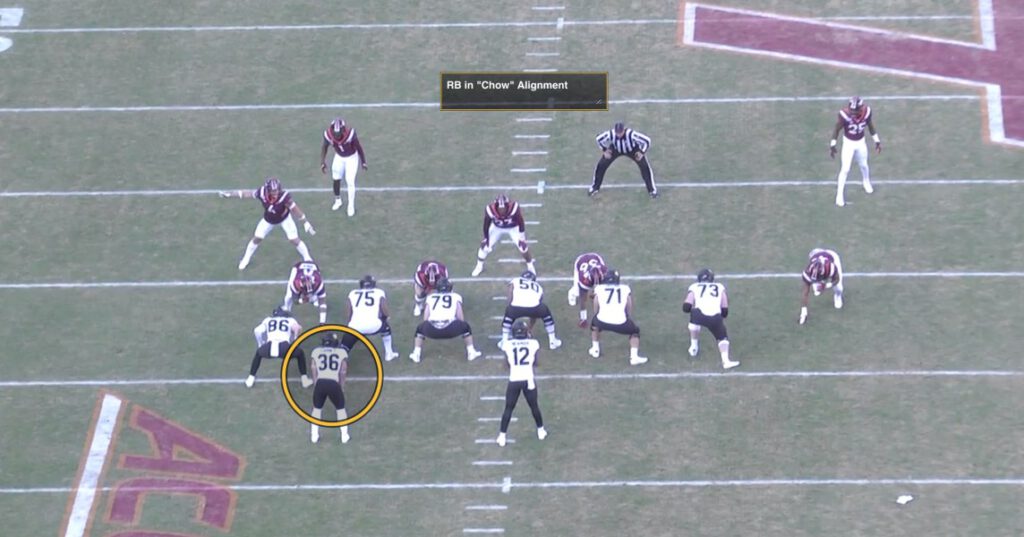 In his base communication system, the Mike linebacker is responsible for calling run strength, while the Backer will call out the level of the back. The defensive ends will make the sniffer call. The Free Safety makes a “Rip/Liz” call for the strength and any pressures that are built-in. This may seem like a considerable amount of information for players to retain and communicate pre-snap, but once the expectation is set it gets carried over from week to week. “It goes back to exposing your kids to enough stuff during the week so that they can adjust themselves,” he told me. “I wanted to prepare our defense for the whole season not fragments of it. Of course, there are going to be priorities as opposed to others. But there are going to things we will run later in the year that I will introduce our kids to early so that they can make an adjustment. Some groups can handle it more than others. That’s when you find out who you can rely on. All you are trying to do is give them enough information and rep it enough where it’s possible to retain and understand. Coaches naturally think that way, but players have to start thinking that way.”

When I started my sessions with Bud, I wanted to see how these pieces get put together into identifying formation structures. So, I pulled a formation reel together and sat with him to talk about how he sees certain formation structure. Admittedly, one of the mistakes I made is assuming that most coaches classify each of these formation types (3x1 open, 3x1 closed, 2x2 open, 2x2 closed, etc.) in that same way. It’s something I’ve done as a defensive coordinator myself by placing almost formation types into one of those buckets, without taking back location and pre-snap alignments into consideration. That was certainly not the case with Bud. He looked at everything- from backfield alignment, sniffer alignment and offensive line splits- all to give his players the best information to make the right pre-snap check before the ball is snapped. Because, after all, they were the ones making the checks. This is purely a jumping-off point for Bud. He’s so wired into the intricacies of a formation (splits, alignments, body demeanor, etc.) it was hard to get his mind to think holistically, and not specifically, about a formation type. It was a valuable lesson learned during day one of my visits. But, thankfully his teaching progression builds gradually as time waned.

While the entire narrated footage is included in the Film Room, I summarized some of our conversation below based on several specific formation types. They are in no particular order.