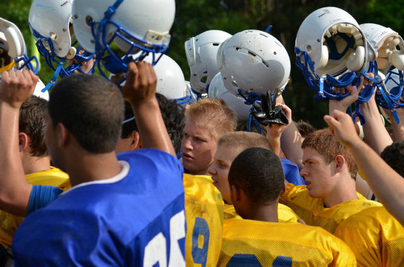 As we all know, the game changes drastically as the offense approaches the goal line.  Nearly every offensive coordinator I know changes the way their offense use formations and call plays due to both the proximity of the goal and the decreased vertical space that they have to work with.  Conversely, experiences have shown me that defensive coordinators are mush less apt to change in this area of the field.  Sure most of us have a goal line package that may switch to man coverage or add a defensive lineman, but most coaches still stick with their base stuff.  This presents a variety of issues that can prove costly in the most important moments of the game.

It is for that reason that we have shifted the focus of our goal line defense from being a defensive adjustment to becoming a special team.  Here are a few reasons for that change:

As is the case with many special teams concepts, simplicity and flexibility is key.  Since we are subbing in players who may not be on defense full time and who may not be expecting to enter the game at that moment. If we have a turnover inside our own 10 and I need to call goal line defense unexpectedly, our scheme is simple enough that the players know what to do even if they are surprised. We also think that this approach, if executed correctly of course, builds the players confidence in the scheme. By keeping simple and flexible, the players always know exactly where to be regardless of the formation thus allowing them to play faster and more confidently.

Our scheme is a mix of several things the coaching staff has encountered, but a large base of the scheme comes from Bellevue High School in Washington. They are the team that broke De La Salle's winning streak. These are the positions and what we look for to fill them:

We call our goal line package GORILLA (as in 800lb Gorilla). Since we went to this package three seasons ago, we have made 15 successful stands in 28 opportunities. These are our alignments in GORILLA: