Editor’s Note:  We all know the success that Virginia Tech has had on the defensive side of the ball.  Defensive coordinator Bud Foster and the rest of his staff have continually developed top tier defensive units.  X&O Labs Senior Research Manager Mike Kuchar spent time talking with Torrian Gray, the Hokies defensive back coach, talking about Cover 89, the Hokies short yardage coverage.

The Hokies traditional defensive structure is generically made off of two fronts- a 4-4 "G" package that Bud Foster helped develop and honed into a dynamic unit against pro-style offenses.  It consists of a four-down front with two interior linebackers (Mike and Backer) two exterior backers (Whip and Rover) and a Free Safety meant to "rob" any underneath routes (Diagram 1).  For the last few years, Virginia Tech has used more of a 4-3, Quarters type structure (Diagram 2) particularly against some open sets that the Hokies have encountered in the Atlantic Coast Conference. 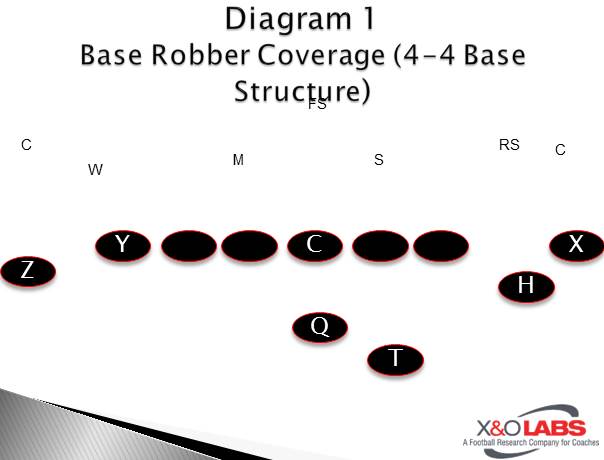 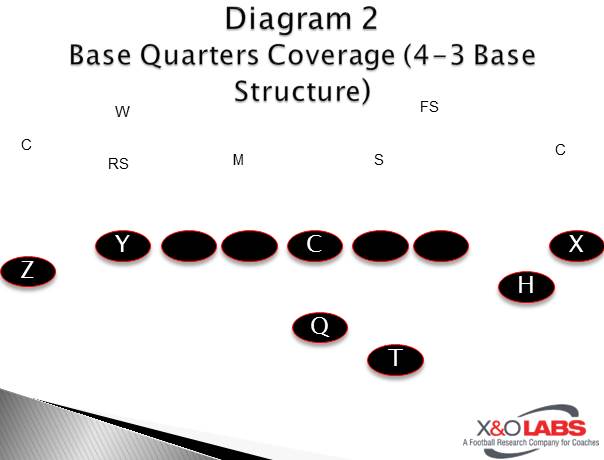 In Virginia Tech’s terminology any even numbers (0,2,6,8) represent that "G" package while odd numbers (1,3,5,7) are indicative of the 4-3 front.  For example, Cover 8 is a base robber coverage from a 4-4,while Cover 9 is a pure quarters coverage.  When those ACC teams start to creep into the 16-yard line (or what Foster calls the red zone) the Hokies will combine both Cover 8 and Cover 9 into what they call "Cover 89" which is a man/zone matchup. Cover 8 pertains to the field side of the coverage (who is playing robber with on exception on the Free Safety which will be explained below) while the boundary side is playing Cover 9.   "Cover 8 is a pass thought progression.  It’s a pass coverage where we’re going to play in and out routes with the Corners and the Whips and Rovers. Cover 9 is a man principle backside."

"Cover 9 is the red zone version of our Quarters coverage backside," said Torrian Gray, the defensive backs coach.  " The corner is locked backside and the Rover Safety is locked on two vertical on any outside release.  If the ball is in the middle of the field, we would play a Strong G instead of a Field G."  Cover 89 consists of what is known as a "play it" or "lock it" call given by the Corners which is all based on down and distance.  The scheme will be explained in more detail below.

We all know the scheme is always over rated, it’s the fundamentals that make plays, so we wanted to detail some of the more important coverage techniques that Torrian Gray teaches his Corners and Safeties in the passing game.

Gray wants his Corners to have hard, square, inside alignment with no tilt.  "We try to deny the inside and easiest throw," said Gray.  "We want to force the outside route and make him throw it through our body.  Against an extended number one receiver, we want to see the ball being snapped.   I don’t want to be just looking at a receiver because if he moves he’s gained leverage.  Once the ball is snapped our Corner’s eyes are going to the inside hip of that receiver.  We use a good two-handed collision to force him outside and make him throw it to our body."

According to Gray, he doesn’t like to press his Corners inside the red zone because it invites the fade ball, which can be a particularly easy completion in the back of the end zone where space is limited.  "Some of those guys prefer pressing and sitting on the route so I let them play with it based on their individual strength," said Gray.  "Right now I got a 220 pound guy who likes to get his hands on receivers so I will allow it, but I prefer for them not to do that.   You don’t want to give them an extra shot at the fade route because to me two/thirds of fade routes get completed."

In Virginia Tech’s 4-2-5 structure, the Rover, Whip (or Nickel) and Free Safety are consist of the back end.  According to Gray, the heaviest responsibility in this coverage falls on the Free Safety who needs to match all underneath routes, something he is not accustomed to doing in the Hokies robber scheme.  This is done to free up both the Mike and Sam to make plays in the run game and take anything that flairs from the backfield.  The Free Safety’s responsibility is to handle any number two vertical route (like he would in Robber) but also match anything under routes.  "When we’re inside the 10 yard line specifically, we need to make sure we are able to jam the receiver before he can get to the option part of his route- either working inside or outside away from me," said Gray.  "If he’s at the 10, I’d like our Safety to be at the five yard line as long as they are not in the way of the linebackers.  If the ball is inside the five, we will stay outside the end zone if possible.  If the receiver can clear our first level, we want to be able to get underneath his leverage or release.   We don’t pedal or back up.  It’s a flat foot technique or a buzz."