"I don’t ask Mike linebackers to carry the seam and handle the run game. You can’t do both of those things with the RPO game today."
- Bud Foster, former Defensive Coordinator, Virginia Tech University

The Ideology: Alleviate Stress for LB’s in Intermediate Coverage

You get what you get with Bud Foster, there isn’t much grey area in his persona. He’s as genuine as they come. So, it’s not surprising that the man’s personality matches his philosophy when it comes to dual reads in offensive football. He doesn’t believe in double-talking players, or as he continually referred to as “fork tonguing” them. I’ve never heard the term before my trip. So, by the fourth time he uttered it I was scrambling to find out if it had a deeper meaning. From a linguistic standpoint, the phrase means to say one thing and do something else. But from a football standpoint, it simply means instruct your players to have one responsibility and do it well.

Quite simply, Coach Foster wants his linebackers to do one thing- stop the run. And if he has any say about it he will not ask them to play both the run and pass in any particular down. “I don’t ask Mike linebackers to carry the seam and handle the run game,” he told me. “You can’t do both of those things with the RPO game today. Offenses will find that and try to manipulate him as much as possible. We want to take linebackers off stress and put the safeties over the top of them. We will put him in a position to not compromise the run.”

The basepoint for accomplishing this is what he calls “Sink” coverage, which is nothing more than what other defensive coordinators call “Poach” or “Alert.” It was the complement to any zone coverage (Quarters, Robber, etc.) when offenses aligned in 3x1 formations. The backside safety (Rover in his scheme) is asked to handle any number three vertical threat, alleviating the Mike completely from any pass responsibility.

The base rules are below: 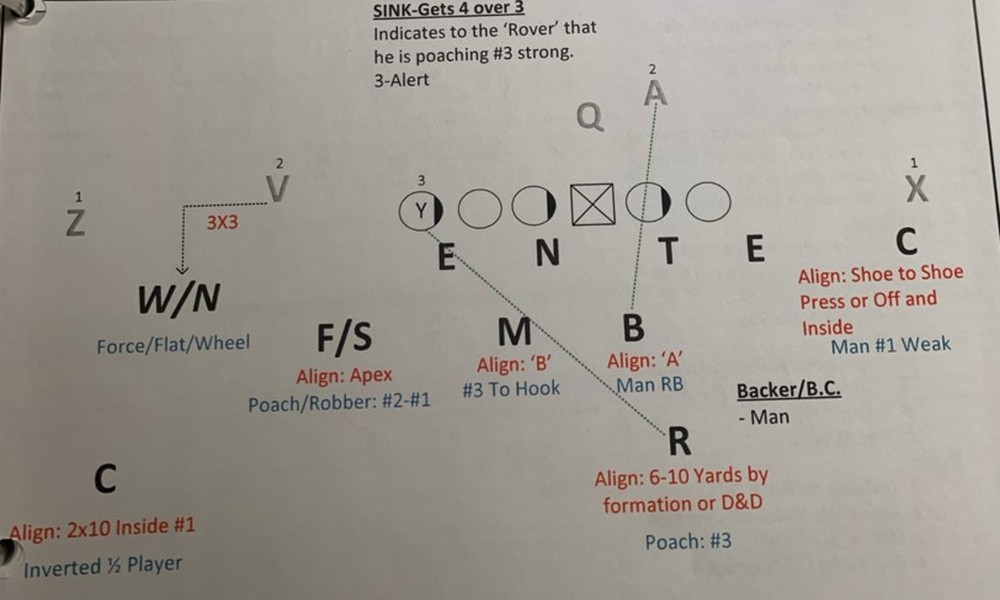 Field Corner (Robber Side)- Alignment- 2x10 inside number one. Inverted deep half defender

Boundary Corner- Man to man on number one weak.

Rover- Poach number three receiver strong. “We cheat him over the strong Guard and he will read the Tackle area to identify run vs. pass,” he told me. “Maybe it’s the Center that gives the best read. Because he has to snap the ball and make his block on one side or the other.”

As evidenced in the clip below, it was a solid answer in safely defending the middle of the field.

But while the passing game may be shored up in trips, it left poor support in weakside runs, pitting a corner in primary support particularly in three surface formations into the boundary.

While “Sink” was a good answer in long-yardage situations, it wasn’t a good fit to hold water in early run downs. “You always have to analyze what is your best package for run and pass,” he told me. “What will give you the best support in the run game? If an offense is running spacing routes and snags I’m not worried about it and we can run Sink. You can match all that stuff up. But if they start running vertical switches and double moves, that’s where they can stress a defense. But can they put all that together? That’s the challenge”

So, when the football world was flipped on its ear with the advent of Run/Pass options, offenses, like the system at the University of North Carolina, were using single-side RPO’s to isolate two their studs at X- Dyami Brown and Dazz Newsome. So, in his preparation, Coach Foster was presented with a choice. He can live by his man methodology by matching up his boundary corner with the X and continuing to tie the Rover into the field side. But that was too tall of a task for him to handle in the RPO world. He had to find ways to bracket the X with both the boundary corner and the Rover.  “I figured let’s match things up to contest all throws,” he said. “Essentially, I wanted to turn everything into quarters or man free. I felt like we can contest all throws and be sound in the run game. I didn’t want to give them anything cheap.”

As shown in some of the clips below, this decision is not made arbitrarily with an understanding of risk. The risk is giving up big plays because of being isolated in man coverage to the field side. To him, the reward of contesting throws was well worth the risk of having QB’s fit throws into tight windows. “You could play three-deep zone but they will stress you somewhere with a seam,” he said. “In zone there is too much space where a 5-yard pass can convert to an explosive play. In man, you can constrict a 5-yard play and you can cloudy the read in Quarters. The bottom line is I don’t want to give them a seam. If I’m going to give them a seam it’s going to be a seam where I can contest the throw.”

The Adaptation: Mini and Key Coverage

So, Coach Foster went to using more match-up man principles in defending the RPO game by playing “Key” coverage to defend 3x1 formations. He locked out number one with the field corner and played a matchup zone with the Nickel and Free Safety on number two and number three. It was a built-in adjustment and an AFC (Automatic Front/Coverage) call when defending RPO heavy teams like the University of North Carolina and Wake Forest University. Playing this adjustment provided him two man advantages:

The responsibilities are below for the field side defenders:

To him, defending RPO’s in man coverage is all about where the matchup issue advantage is defensively. That usually came with slot receivers working off the Nickel. “A lot of teams worked us on number two tying up our FS or play action and running #2 on posts,” he said. “The conflict is going to be a matchup on the inside receivers. So, Key coverage alleviated some of those matchup issues by having the Nickel and Free Safety bracket number two strong. Now with QB-generated RPO’s, you have to play man coverage but you need to do it with vision.” He expects his back half to play with man eyes by using a simple analogy- put your pecker on his inside hip. “He should not cross your face unless it’s a shallow cross,” he told me. “To do that we teach to slow play it with a slide and glide technique. You need to be off so you can see the route and drive on it.”

As shown below, the defender must work to fight to gain leverage once number two is vertical.

This slide and glide technique can also be used by the Free Safety driving on number three in key coverage.

Key coverage was also used against heavy personnel outfits like the University of Pittsburgh to defend its boot and play-action game. It provided for sound coverage against flood concepts like the one below:

Since it is part of the quarters/man free coverage family, Key coverage can be utilized with any 5-man blitz package. Bud would prefer to pair it with Cowboys to trigger the backside corner. A major advantage in playing Key coverage is the run support provided at the point of attack. Since the Whip/Nickel is involved in potential man coverage responsibilities, the Mike linebacker has an A gap to ball rule and asked to hammer any run game back to the Backer and Rover who would be the free hitter vs. trips. Again, if the Mike feels stressed in having to play an interior gap, he’s always given the responsibility to make a “Taco” or “Black” call to clear the gaps in front of him.

The Free Safety can now become a bonus defender against the run if he gets a true run read from number three. Clearly, if number three is attached to the core and not detached this can be diagnosed much quicker.