Now we segway into how using the fundamentals and techniques in the earlier cases transitions into defending RPO (run/pass option) concepts. In this case, we present our research on the run responsibilities of each defender. Remember there is one clear definitive in the reasoning why coaches are preferring to use man free coverage structures to defend RPO schemes: there is no conflict defender. The entire premise of the RPO system is to manipulate a defender in zone coverage who may have a dual responsibility by playing both run and pass. That is certainly not the case in man free coverage. Defenders are given either a run or pass responsibility pre-snap and it is their singleness of purpose to carry out that assignment.

Now, the down side of man free coverage structure is there is no traditional numbers advantage in the run game. In 4-2-5 defenses, it is six-for-six in the box against open formation offenses (Diagram 16). It’s a single gap control situation, “a get a hat in a gap and go mentality” with a defender asked to make a tackle on the player he’s responsible for. Now, later on in this case, we will detail how some coaches are getting a numbers advantage by cheating the extra, low hole or high hole defenders, to get another hat in the run game. When offenses add an extra hat, thus adding an extra gap in the run game, another defender must be accountable. This defender is usually the strong safety against three man surfaces (Diagram 17). 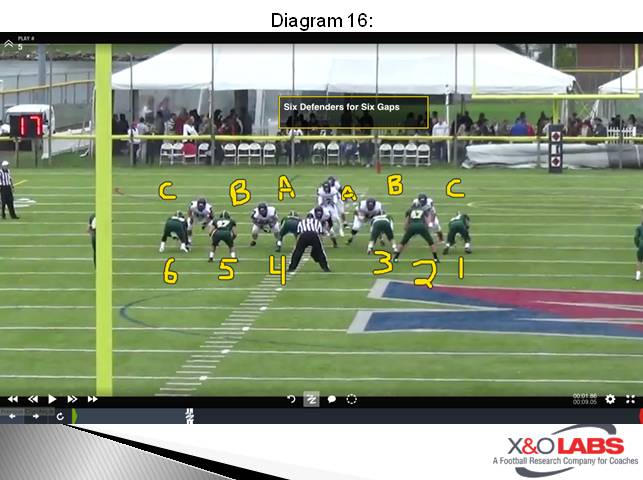 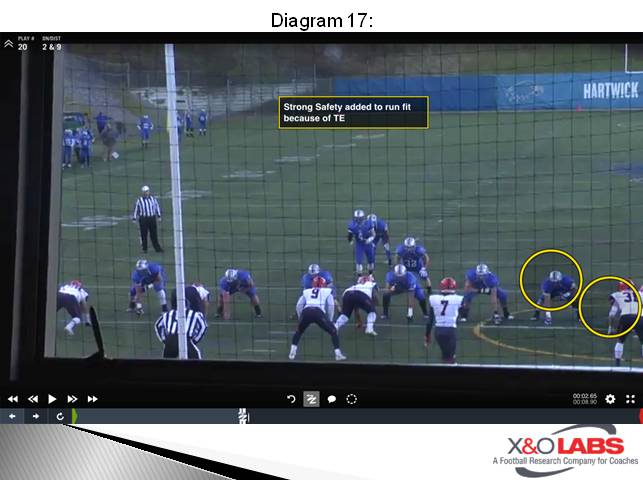 Now, the benefit of having a closed tight end is that it may be a clean read for the strong safety to trigger on a run or pass. “The tight end is the best key in football because it’s very hard for him to lie,” said Will Pluff, the defensive coordinator at Utica College (NY). In order to make it a cleaner read for him, Coach Pluff will align his defensive end in a C gap so the tight end must have to make contact on that defender either way. And as we expounded upon in case two, the H/Y off key is often just as true in determining run or pass reads. The defender responsible for that player will simply add on to the run fit whichever way he moves pre or post-snap.  But either way it doesn’t change the box count. “We have to study the formation,” said Coach Pluff. “It’s really about what they are doing with the tight end off the ball. If they take the tight end and put him off the ball and involve him in the RPO, well then they have five blockers up front. They could block you with the quarterback as well. You have to make sure you need to have six in the box for the run and you get that in the 4-2-5 look. Our two inside linebacker will fit to the box. Schematically, we need to make sure we have eyes on number one, number two and number three in the pass game. If we have eyes on those guys and not involving the inside linebackers, I think we have a shot.”

Training Box Defenders to the Run Element of RPOs:

Basically we found four areas of study in training the box defenders to play the run element of RPOs. They fit into the following areas:

Grant Caserta at Husson University teaches his box defenders a gap based system with the understanding that this may change based on any pullers. Against the zone read run game, the crux of our entire defense is having all interior run gaps accounted for. As Coach Caserta asserts, “If we leave open gaps inside from tackle to tackle, there is no way we will stop the run consistently. Fitting gaps properly on the interior is crucial. We feel like the strength of our defense is stopping interior runs, so that is where we prefer the ball to go on option plays.” As a general rule, anybody who is blocked has the dive. The unblocked defender will play the quarterback, which would apply against other types of RPOs as well, such as when defensive tackles or linebackers are read. The purpose is to get the ball handed off on any kind of zone read, RPO or any other kind of option. “All inside run defenders need to fill their gap based on the run scheme. We stress to these players that they need to stay in their gap and take care of the running back,” said Coach Caserta. “They must trust that the perimeter players will do their job and take care of their respective responsibilities. For these inside run defenders, it does not matter if there is a ‘read’ element to the play or not they should fit the run the same way regardless.”