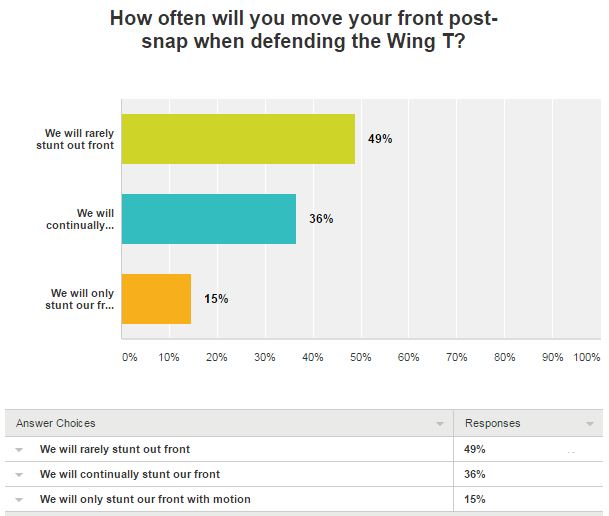 Movements in Four Down Fronts:

Sparta High School, a perennial public school powerhouse in New Jersey has had success defending Wing T run game from its 4-2-5 front by mixing in several post-snap run movements by its first level defenders. On almost every play, Defensive Coordinator Christopher Kappelmeier will make sure one or more of his defensive linemen will be stunting into the adjacent gap or across the face of the offensive man and he’ll teach the proper stunt technique early in the preseason and practiced regularly. Many of them are gap exchanges which include second level linebackers as well.

“At Sparta when we practice our gap exchanges we do it during the inside run period. It is vital that the stunting linemen and linebackers be able to read and react while moving. Defensive linemen learn by repetition to read the offensive linemen toward whom they are stunting. Linebackers learn by repetition how to fit open gaps and not get caught between stunting defensive linemen. We have found that the movement of the defensive front, even if it doesn’t seem to be fundamentally sound on paper, very often creates situations in which defenders are totally unblocked and in position to make big plays. Pre-snap we try to look the same every play. The only player who may need to change his alignment is the nose. If he is stunting into the B gap, he aligns in a 2i-technique. This does not telegraph his intention to stunt because that is his alignment in the tight G front which is used often.”