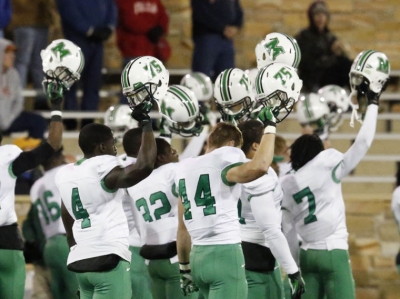 If an offense is centered on 10 or 11 personnel groupings, chances are the spread option game is a vital component of its play menu. That play menu will most likely consist of the power read and zone read game. Regardless of what formation offenses will dress these schemes up in, defenses need to have a plan to defend them. The research below serves as “change-ups” in defending spread option concepts. Implementing them into your base plan can yield negative plays and perhaps even turnovers.

The zone read game has been a staple among spread offenses for years and it’s not going away any time soon. As offenses are finding various components - pre-snap movement, formation changes and blocking variations - to dress up these concepts, these items shouldn’t be of priority in defending them. The following techniques and stunts can provide for indecision at the quarterback spot, which can lead to negative plays and more importantly, turnovers.

With “first threat” as our base technique, we can add our adjustments from there. The first of these is called “chase” (Diagram 3). This is a basic scrape exchange between the end and play side linebacker. Through our weekly tendency break down, we decide which side we will do this to, the back or quarterback. This is based on if they are primarily a zone or power read team. Normally, this would be more of a zone read change up, so we usually have the end on the side of the back executing it. If he gets a down block, he will chase the down. In doing so, we have now given him the back. Our play side linebacker will then exchange with the end and he has the quarterback. If the 7 technique ends up with this stunt, he will no longer be reading the tight end. If he gets a down out of the tackle, he will chase the down and have the back. Against power read teams, this exchange would be executed by the end away from the back and it should give the QB a quick give read. 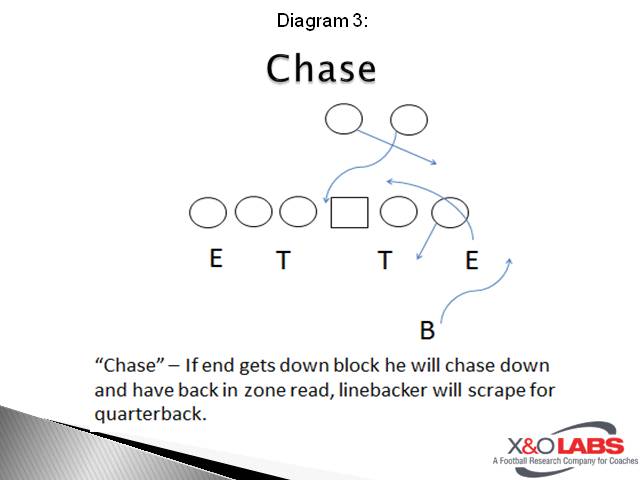 The final defensive line call we can make against read teams is called “hit”. This tells our end he is going to hit the quarterback no matter what. As mentioned before, we determine the end that will be running this based on tendency of the opponent. We could run it to the back, away from the back, to the strong or weak side end, or we’ve even had both sides run it if called. This is a read stunt so it only happens if the end gets a down block. They should know it doesn’t matter if it’s zone read, power read or any other variation, if he gets a down block he will head to the quarterback. Like chase, if the 7-technique is the end running it (the stunt) he would be in a tackle read instead of a tight end read pre-snap. We give the end an aiming point to stay at least half a man outside the quarterback, so it can be run outside in. In a perfect world, it will look like the end is up field like our rocket stunt; the quarterback will make the wrong read, and we will hit him for a big loss. Even if it doesn’t work out perfectly, we want the end to tackle the quarterback. We tell our kids the more we hit the quarterback in the read game, the more likely he’ll make a mistake and start guessing on his reads (Diagram 6). 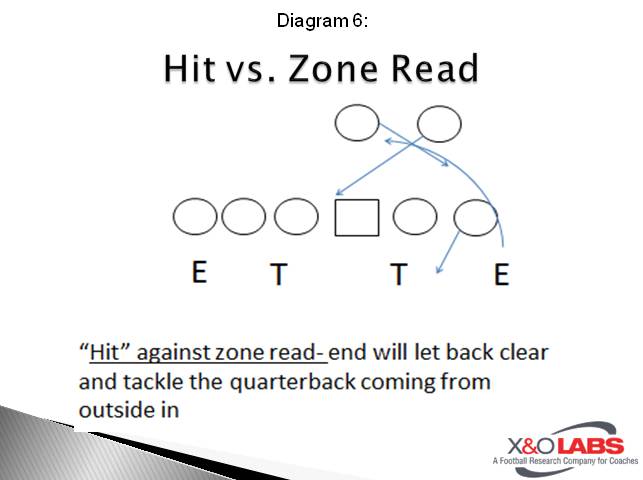 Since many defensive coaches group the zone read and power read concept together, we decided to present our research on these two concepts together. The “inverted veer” as some coaches refer to it, forces defenses to both out-leverage the ball carrier on the speed sweep, yet be sound enough in the box to handle the quarterback run. The following movements and techniques allow defenses to accomplish both these feats.