It is without question that second and third level post-snap reads need to be sharp when defending these offenses. One false step can equal one big play, which is why we wanted to devote an entire case study on how coaches are teaching their defenders to react to defend the run game of these teams. Regardless of the defensive scheme, we wanted to ask coaches what they were telling their box defenders to read post-snap. This could mean the three linebacker set in a 4-3, the two box linebackers in a 4-2-5 or the two box linebackers in an odd front. The perimeter players are not included in this section. For years, defensive coaches have been preaching to “read the guards” when defending these misdirection offenses and it seems that advice still holds validity today considering it was our number one response. Consider the percentages:

58 percent of coaches that defend the Wing T will tell their box linebackers to read the guard.

54 percent of coaches that defend Double Wing offenses will tell their box linebackers to read the guard. 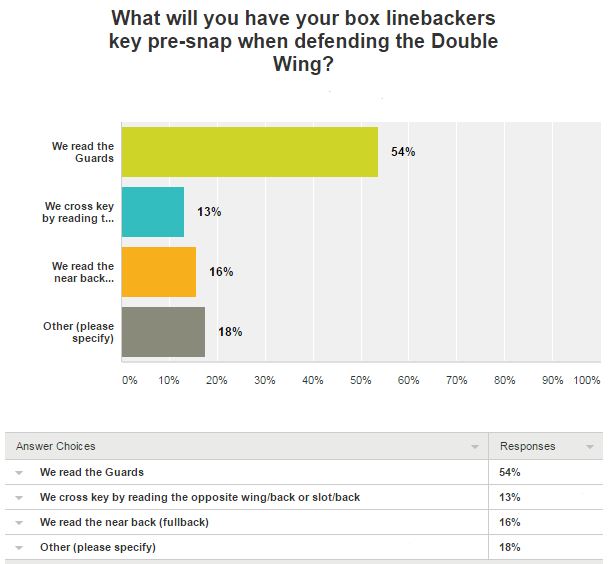 45 percent of coaches that defend the Single Wing will tell their box linebackers to read the guard. 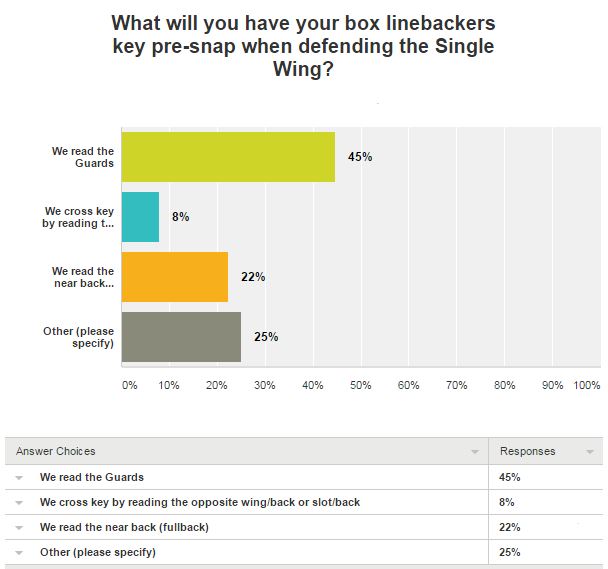 This is mainly due to coaches who will have box players read the sniffer back (fullback) which we will detail later.

Jerry Gordon, one of the more experienced coaches we spoke with, and the0 Defensive Coordinator at Broad Run High School (VA) who wrote a book on his Under front which can be found here. Against Wing T offenses, he’ll have his Mac (Mike linebacker) and Will read the guards out of his Under front. The Mike is playing the bubble, so he’s got a clean vision. “We want them on the guards,” said Gordon. “Those guards will pull if it’s true Wing T. Many coaches talk it being difficult to get reads nowadays, but if it’s a good true Wing T teams those players are going to move. If they don’t move they are not a true good Wing T team. It’s a better read than cross-keying.”

To see cutups of Coach Gordon’s box linebackers defending the Wing T run scheme, click on the video below: