It is an honor to represent the defensive staff at Dutchtown High School in presenting this article on Defending the Flexbone Offense. It is my goal to stimulate thought and to take you through the concepts that we have developed to try to combat this offense and its variations. The material encompasses all of the trial and error that all of our defensive coaches have gone through and continue to go through in defending this particular type of offensive scheme.  Due to limited space I will not be able to go into great detail on each technique or scheme, but hopefully you will find some ideas on how to defend this type of offense. I will also concentrate mostly on the triple option and play action aspects of the offense. Though we know we don’t have all of the answers, I do feel like we have something worthwhile to share on a concept of which little information is available.

In developing our defensive strategy for the Flexbone offense, we have gone through a multitude of defenses before we settled on the concepts that we have today. In the beginning we started with a basic 4-2 scheme with 3 Robber coverage (Diag. 1). We put the tackles in double one techniques to expand the crease, and put the ends in tight five techniques.  Within this scheme we also played crack and load concepts on the perimeter. The outside rotators and the free safety read the slot back and fit accordingly. If the slot load blocked, the outside rotator squeezed for the quarterback and the free safety fit opposite to the pitch (Diag. 2). 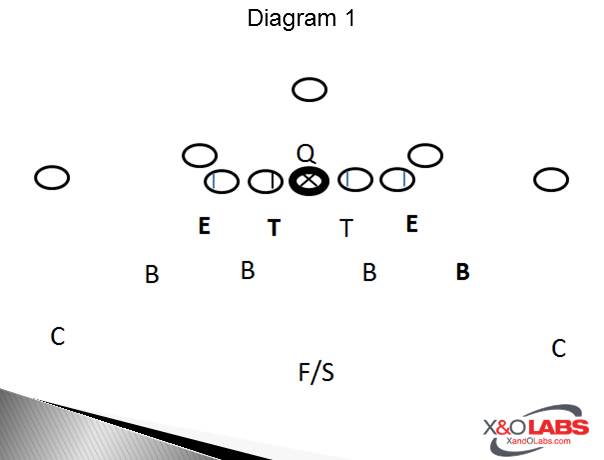 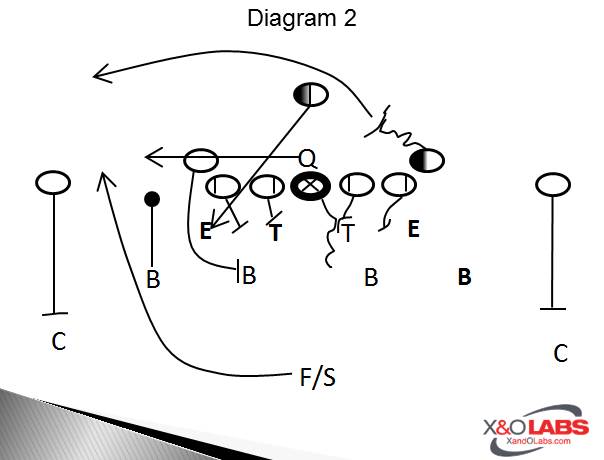 If the slot arc blocked, the outside rotator expanded to the pitch and the free safety fit opposite to the quarterback (Diag.3). In the beginning this seemed like it would be enough.  We enjoyed great success against the offense, but the offenses started figuring out ways to counter what we were doing. With the advent of different blocking schemes on the perimeter to get to our single safety, we found out quickly that we could not stay in this scheme any longer. The single high safety was crack bait and if you didn’t have a war daddy in that spot the scheme just wasn’t as effective.  This offensive attack confirmed some basic principles of defense that we had been exposed to for generations. Power offenses demanded 8 and 9 man fronts and option offenses demanded 7 man fronts.  At he time we really like our four man front approach and modified it in order to defend from a 4-3 look with true quarter’s coverage (Cover8) (Diag. 4). 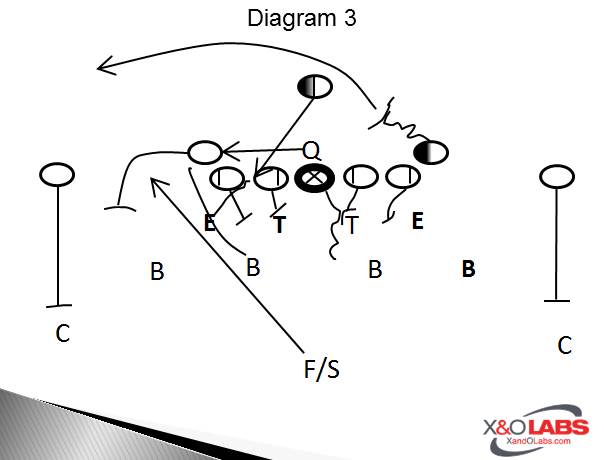 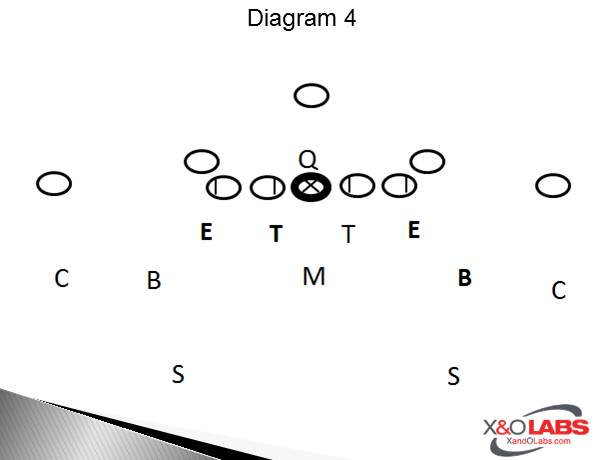 This scheme, with its adherence to our philosophy of playing a 7 man front to option football, allowed us a better comfort level in defending this offense.  The Mike linebacker was the inside-point player (Dive-QB-Pitch) and the outside backers and safeties were on crack and load reads (Diag. 5). We had one change up that we really liked and it was called exchange. In an exchange call the End would take the QB, the outside backer would take the Dive (we told them to own the B gap) and the Mike linebacker deepened to 8 yards and tracked the ball sideways, to get an extra alley player (Diag. 6).  Since offensive coaches figured out better ways to block the perimeter versus our Quarter scheme we saw that we needed to add more coverage variation to keep the offense guessing. We decided to stay with our split safety concept and add Cover 2 to our repertoire in option defense. Of course we already played the coverage so it wasn’t a big jump for us, but it did force us to spend more practice time because we were adding a concept to our defense. With only the Mike linebacker inside we found that the counter actions were tough on him, and sometimes the dive could cut back hard behind him because he didn’t have a buddy inside.  We decided to start changing the front structure to more 3-4 looks. We didn’t think we had enough pressures within our scheme to create plays for ourselves against the Flexbone teams. Our goal was to out execute them, but as we all know sometimes you have to pressure to create negative plays. The 3-4 looks allowed us to pressure a bit more, give the Mike linebacker a buddy, and stay sound versus the option. We figured with all of these answers we would have a comprehensive scheme that would take care of any situation we would encounter. As you are reading this article you could possible come to the conclusion that a combination 3-4/4-3 defense with multiple split safety coverage, and certain perimeter reads to help protect yourself versus blocking schemes is perfect. In theory it might be so, but we found that the scheme became a monster. As the scheme grew we started having more mental errors and we found that our players were playing tentative. We had to really do some soul searching to figure out the things that we liked and toss out the rest. 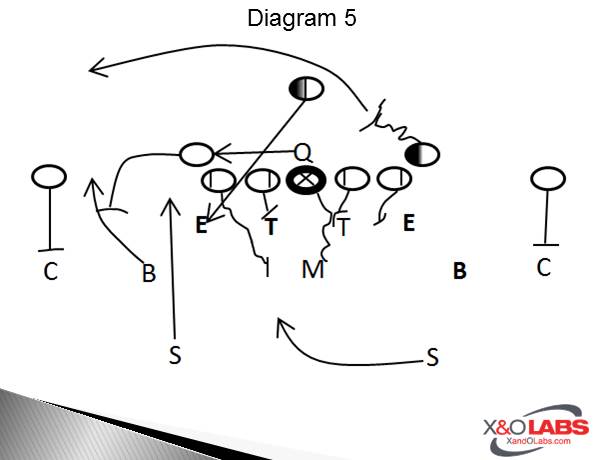 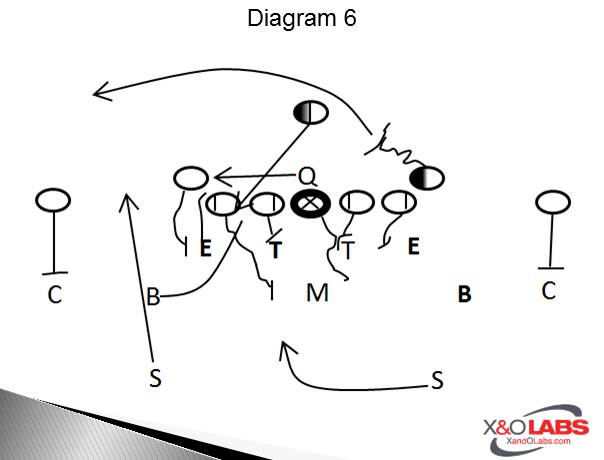