When we first conducted our research on defending RPO concepts, we were under the assumption that many defensive coordinators will use man coverage structures against them. But as noted in case three, the majority of coaches decide to use split field coverage principles against these types of concepts. This is done in order to negate certain types of route structures based on field/boundary, formation or personnel tendencies. However, there are pockets of programs- such as the ones studied below- that believe whole heartedly in utilizing pure man coverage structures (either cover zero or cover one) to defend RPO concepts. We found that while man coverage concepts may be easier to teach, the success of using these principles are tied to the fundamentals in which they are taught. We examine the different man coverage fundamentals coaches are using in this case.

We decided to segment our research in this case to certain coverages that coaches are using to defend RPO concepts. We also detail which types of RPO concepts or constraints (stick draw, zone bubble, zone pop, etc.) that these coverages are efficient in defending. This case will focus on zone-based configurations, whether it be split field variations or whole field variations. Our research shows that 14 percent will use man coverage principles to defend the RPO game.

We selected four sources that have had a win percentage of .750 or higher in defending these offenses to explain how they were successful. Their system analysis is below.

Run First/Pass First Methodology:
According to Coach Giancola, where it all got challenging in defending RPO concepts is with teams that started recognizing players that were responsible for the run and the pass. “We had to struggle with the number of adequate guys in the box and an adequate number of guys in the secondary playing pass,” said Coach Giancola. “So teams started running RPOs like fade out and not only picking on an overhang, but seeing what our second level flat defenders were doing. We’ve also seen teams letting the window open up more off the read player and taking a shot on us 15 yards down the field.”

Because of this, Coach Giancola and the rest of the staff started to designate at least one player, mainly a linebacker, to play the pass regardless of his run read. There was a different pass first defender based off the coverage calls. “We have to tell that kid if you get a run read and you are the pass player you have to slow yourself down and alert yourself to the near receiver on the tailback side,” said Coach Giancola. Since many RPO concepts are tagged to the side of the back, it’s that receiver closest to the back that needs to be accounted for in the RPO game. “We tag these with coverage calls,” he said. “In all of our coverages and fronts we know who is pass first or run first. Linebackers need to be run first players or otherwise dictated. We found that tagging the coverage with something like a ‘Tampa’ or ‘Trace’ that you can slow down on the run and favor pass.” Coach Giancola was clear that when that player does see the ball handed off they come up and make the play. “The linebacker reads line through the tailback,” said Coach Giancola. “You see run read and see the mesh point, the next place your eyes have to go is the near receiver to the tailback side for the pass.”

Coverage: Tampa
Constraints Defended: 2x2 and 3x1 Backside Pop or Skinny
Tampa tells the secondary Mike linebacker, or linebacker away from the back, that he needs to key the receiver closest to the tailback side. “We do this with teams that run the number two receiver down the seam with the back to the same side,” said Coach Giancola. “We needed to give our guys help underneath in the secondary because when linebackers were forced to play the run it opened up a hole in the play action game.” Coach Giancola will not give that player a run gap responsibility. The overhang away from the back will be tied into the fit as the C gap player; the defensive end will play the B gap and the nose can two-gap technique. The apexed linebacker away from the pass first player plays cutback, while the first linebacker play side is clued in on the run. “We protect him inside with 4i-techniques he can be late to the football,” said Coach Giancola. He will play a robber concept to the field and a quarters concept away. 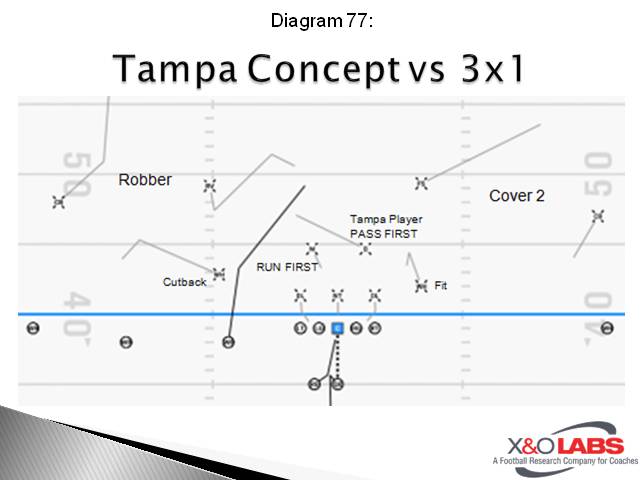 To study game cutups of Tampa coverage against RPO concepts, click on the video below: