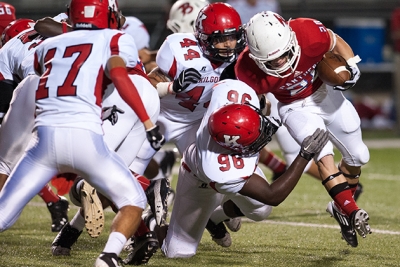 Offenses are continuing to evolve and add more run read plays for the quarterback. As a defensive coach, you have to have answers that allow your kids can play fast while accounting for different looks so that the quarterback doesn’t get the same read every time. At Kilgore HS (TX), we will have developed four different ways to play the various read schemes by change-ups for our defensive line.  Many of these are ideas are borrowed from past experience defending the triple option and veer teams. Even though some of these schemes on offense seem new, for the defense it still comes down to the old cliché of “assignment football”. These change-ups allow us to be able to dictate to the offense that we want to carry the ball in the read game based on opponent tendencies and our calls. Each of these stunts, discussed below, is primarily for our defensive ends since they are usually the players being read.

We base out of a 4-2-5 defense and we play “attack and react” with our d-line 85-90% of the time.  With that in mind, we spend most of our time working block recognition and destruction and expect our defensive lineman to win the line of scrimmage. Generally, we play a heavy seven technique to the tight end side reading the tight end first. We put a lot of emphasis on winning this battle with our ends.  On the weak side of the formation, we play an open five technique. These stunts can be easily adapted to and run from other fronts and shades, in the film you will see us running them from a 9 technique as well.

7-Technique Reaction: When the 7-technique is getting read he will get an outside release from the tight end (Diagram 1). As he realizes he is getting a non-aggressive block, his eyes will immediately go to the tackle and he will squeeze the gap. If he gets a down block out of the tackle he will continue to squeeze and look for a kick out block or look to the quarterback. We teach them the mantra “if he’s reading me, I’m reading him.” Our ends are taught to take “first threat” because with all of the different reads, you can’t say he always has the quarterback or always has the back. By assigning him the first threat we eliminate that confusion. He will squeeze and take the first thing off the tackle’s block.

Even though this is the base way we play it, it’s probably the hardest for most of our players. They don’t want to trust and stay patient, they feel like they have to go somewhere and get out of position on any type of Read play.