Protocols for a Defensive Identification System

It’s that time of the year when offenses are either being constructed or retooled, so we felt there was no better timing than now to release our latest study on defensive identifiers.  The following information is based on a collection of surveys designed towards offensive coaches in an attempt to decipher the progressions used in three major defensive identifiers- front, second level players and coverage.  While we realize all programs may have different methodologies in uncovering these structures, our goal was to find and provide a common denominator for each. 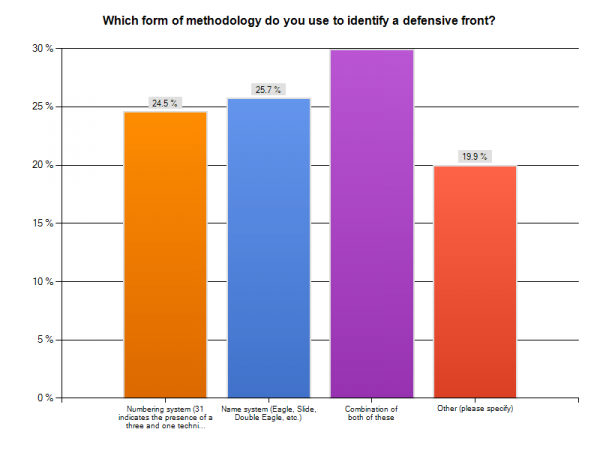 The first part of any identification systems seems to be recognizing the defensive front and more importantly which player makes the call to do so.  Our research was split down the middle when deciding which player makes the front identification call.   According to our research, 53.6 percent of coaches will have their Center make the call to recognize front while 22.6 percent will have their QB handle that responsibility.   Rich O’Connor, the offensive coordinator at Montclair State University (NJ) has his Center’s make all the checks for two main reasons- he’s usually more versed in studying defensive fronts and it’s just another thing that QB’s don’t have to worry about.  "Our QB is asked to do a lot in our system, so we just felt that this is something the Center can handle," says O’Connor.  On every snap, he’ll have his Center make three calls: identify the front, identify the Mike LB and then give the box count (the amount of players in the tackle box).

We also had a good faction of coaches split the responsibility between the Center and the QB.  "The quarterback and center both have a role in identifying the front. The center is going to make an odd or even call, and identify the Mike," said James Vint at Cornado High School (TX).  "The QB is going to identify and communicate the "Q" player. The Q player is the defender the quarterback is responsible for in our option schemes."   Some coaches, particularly at the high school level, will even let their most experienced offensive lineman handle the call.   Others will also have their running back make the call for the skill players.   Regardless of the call, 82.1 percent of coaches surveyed will always identify the defensive front on every snap.

We’ve found that 29.9 percent of coaches use a combination of a numbering system and a name system to identify defensive fronts.   A numbering system mainly refers to the technique of the first level defenders, which would read from left to right.  So in an even front a 13 front would resemble a one-technique or shade to the left and a three-technique to the right.  If the number were 31, than a three-technique would be to the left side while the shade or one technique would be to the right.   Some coaches, particularly spread system coaches even use a color system to indicate where the three-technique is in an even front.  For example, the "red" side may denote the side of the three technique, while the "white" side may be the shade side.    One of the coaches who took our survey verbalized how he identifies an even front.  "When we are facing an even front team the Center will ID the 3 tech with a "red" or "blue" call then he will ID the Mike linebacker twice.  If the defense aligns with a two-technique, the C will make a DEUCE call, then ID the MIKE.  If the defense aligns into an Over front the Tackle that has the ghost 9 tech will make an OSCAR call to the C, the C will repeat and ID the MIKE.  When facing a 34 team the Center makes an OKIE call, then IDs the Mike.  When facing a 33 Stack - the Center makes a "Stack: call, then IDs the Nose guard with a "Zero" technique call.

When we researched this further we did find that 87.5 percent of coaches don’t deviate from a shade and 3-technique side against four down fronts mainly due to the multiplicity that defenses present by pre-snap stems and post-snap movement.   So what is the benchmark number of fronts that offenses should be identifying?   What is too much?  The base number seems to be three or less- 61.9 percent of coaches only use up to three identifications while 34.9 percent use between 4-7 identifications.   Offenses are not trying to limit their verbiage in identifying fronts.  Now, we’ve found that spread teams are simply identifying only the bubble (a gap not accounted for by a first level defender) for zone techniques. They will only use two names and cut the ball in half if either you have an open B gap or a closed B gap.   " Our Center ID's front based on where A & B gap defensive linemen are aligned," said Coach Hagebusch at Nowata High School (OK).  "Next he ID's the MLB or the LB most likely to blitz to help with pass pro."

Coach Hopkins at Basehor-Linwood High School (KS) follows the same methodology.  "We only say odd or even. We really don't consider it "odd" unless there is a true zero-technique Nose guard and we don't care if there are two or three linebackers," said Hopkins.   "Due to stemming by linebackers, we don't focus on names such as Eagle, Bear, etc."   We did find coaches like Bryan Moore at Heidelberg College who will only identify the front if it is a Bear front-which denotes a zero technique Nose guard and two three-techniques.   Rick Wimmers at Fishers High School (IN) believes in the same simple methodology.  "The Center IDs all fronts as either 3 Down (1 defender in A & B gaps), 4 Down (2 defenders in A & B gaps), or 5 Down (3 defenders in A & B gaps)," says Wimmers.  "The QB IDs the Point with the defender's number ("51's the Point!")."

Some coaches like Thom McDaniels at Glen Oak High School (OH) ties the front into their cadence.  "Our Center will make an Over (4-3), Under (Shade), Odd (3-4), or Even (4-4) call to identify the front," says McDaniels.  "Our QB identifies the coverage in his cadence.  For example: Red 4, Red 4, Set, Hut declares the coverage as Cover 4; Blue 1, Blue 1, Set, Hut declares the coverage as Cover 1. The color is not significant to the front or coverage. Our OG's will then make a Tim (inside) or Tom (on or outside) call to identify the location of the first defender to his side."