When analyzing the defenses that we saw in the 2015 season, we were astounded to see so many different looks. Teams tended to have similar strategies to stop our base plays, but the alignments that they operated from were wildly different. Not only that, but each basic front had so many subtle variations that the blocking schemes could look completely different against similar fronts with slight adjustments. This placed quite a bit of stress on our offense, specifically the offensive line. The emphasis of this article is not specific techniques or schemes, simply how we sought to solve this problem through defensive identification.

The first step in alleviating the problem was developing a more detailed, yet intuitive way of analyzing fronts on film. An Over front with two LBs in the box is not the same (and is not blocked the same) as an Over front with two LB's in the box, a DE reduced to a 5-tech to the TE side and a LB walked up into a 9-tech. The front ID system that we began to use was divided into the three most descriptive categories for us: the base "Front" (Under, Okie, etc.), the "Box" (# of players at LB depth in the box), and "Tags" (we had different descriptors for small adjustments, like LBs walked up at different points on the line, etc.). Together, this naming system allowed us to quickly analyze a defense with breakdown data and see how a defense liked to align before we even began to watch film in-depth. We also saw quite a few benefits with the offensive line being able to come to the sideline and accurately describe to us what they were seeing on the field.

On the field, pre-snap identification needed to be simplified much more in order to identify combo blocks and ensure that all players were accounted for in the box. Our up-tempo offense placed a premium on our players' abilities to quickly ID a front, make their calls and play fast. To do this, we installed a "Point" system, similar to what many schools across the country use to establish a standardized method of identifying blocks that can be used in all run plays as well as pass protection. To illustrate the way we used this system, we will focus on our inside zone for the run game and our 6-man half-slide pass protection. We will also briefly look at how we apply it to other runs/protections.

As with most schemes, we borrowed quite a few ideas from multiple coaching staffs to establish the system that would work best for us, much of which came from the staff under offensive coordinator Bill Cubit at the University of Illinois. I would be amiss if I didn't credit this staff for what they did so well.

Application to Inside Zone

With the multiple looks that we received from defenses, it was clear that the classic "covered/uncovered" principles could not always account for every player in the box against unconventional alignments in our inside zone. Simply running tracks would result in unblocked players against certain looks, especially when defenses tried to protect LBs by nesting them behind certain techniques of defensive linemen. Our application of the point system to our inside zone combined elements of zone and man schemes: the flexibility and capability to pick up movement of a zone scheme with the certainty that every defender was accounted for  in a man scheme.

The process at the line begins with the Center's "Point" call. His call will identify a LB by number (ex. "Mike 52!"). This establishes the "0" in our numbering system. It is important to remember that the "Mike" is not necessarily the true Mike linebacker. For our inside zone play, the 0 is simply who the Center (or the Guard in his combo) is working toward. This varies depending on the play, but that is our rule for inside zone. The Center has some flexibility in his Point call and can adjust it as he sees fit. His only rules in zone are that against an even front (4 down linemen) he establishes a playside Mike point and against an odd front (3 down linemen) he makes a backside Mike point. There is an inherent amount of trust in giving this responsibility to one player, but our current Center just finished his third year as a starter and has quite a bit of awareness on the field. If needed, who establishes the Point could be adjusted, but we did not want to put more on the QB's shoulders and the Center has the best vantage point on the OL. 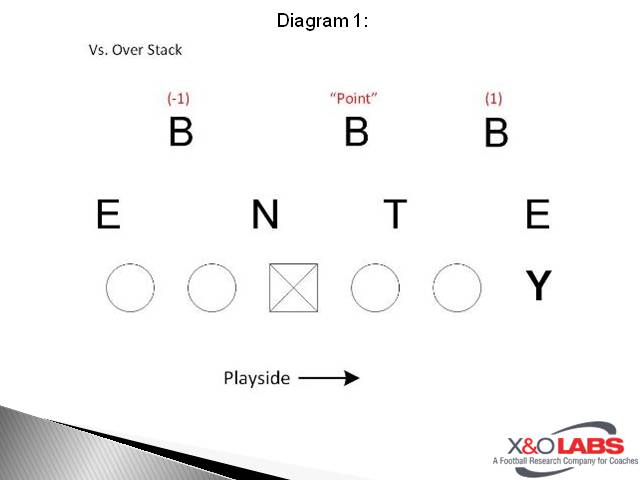 Once the point call has been made, the Center has declared who he is working toward (the “0”). He then makes his combo call, declaring who he is bringing with him to block the first down lineman playside in combination to the 0 or Mike. From there, the combo calls can be made outward from the Center. The combo playside of the Center will be responsible for the next adjacent down lineman and the “1.” The combo backside of the Center will be responsible for the first backside down lineman and the “-1.” We have a set of combo calls for each possible combination on the line, as well as “solo” calls for one-on-one blocks. We allow our players some freedom in deciding who combos and who can be left with a solo block, allowing us to adjust the combinations to ensure that we combo more dangerous defensive linemen. The numbering system ensures that we have everyone in the box accounted for, no matter the alignments. Typically, we will cut the backside DE loose and read him in our inside zone. If there is no “1” in the box (the 0 is the furthest playside LB in the box) then the next combo playside from the Center’s is working toward the run support player to that side, or a LB who leaks out over the top. We refer to this as an “MDM” combo, or “most dangerous man” combo.