As a defensive coordinator, one of the things I like to do after every season is review each game film and try to see what made us successful and what hurt us each game. Defensively, the main things I like to focus on while watching film are: our alignment, assignment, tackling, team pursuit and ball disruption (turnovers). Recently, I started to look at our results from season-to-season to see if there were any continuous traits that were not allowing us to be successful defensively. Some years it could be as simple as we just did not have the “Jimmy’s” and the “Joes”, but more often than not it came down to ball disruption and getting turnovers or lack of.

Years ago (2010), I stepped down from being the Offensive Coordinator and I took over our defense, as I felt we were not accomplishing what we needed to do defensively. One of the biggest things I wanted to do was get our kids to understand on defense you can score. I wanted them to not look at our defense as “defending” our own end zone but attacking our opponents’. I wanted them to get the mindset that we are going to score on defense and if we cannot, we will at least get the ball back so our offense can. 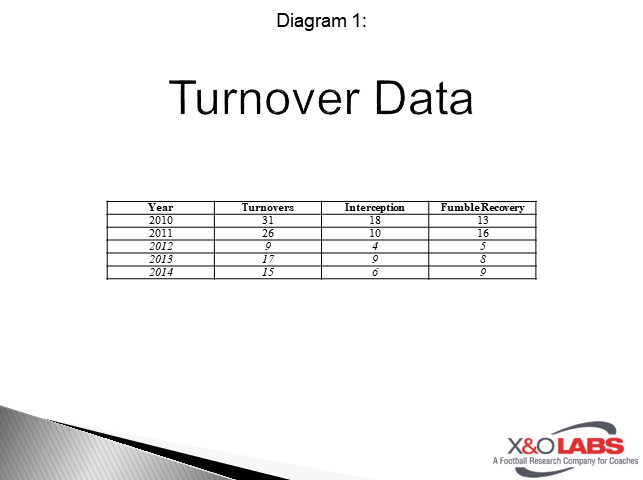 After the 2012 season, I quickly realized that defensively we were not getting as many turnovers in recent years as we did in 2010 and 2011. Looking back at our practices that year, we also got away from our turnover stations in any part of our practices, which by the 2012 data you can see it affected us on Friday nights. So, when 2012 season finished, I realized we needed to continue to implement some type of turnover stations in our practice plans.

The big thing is that doing turnover stations by itself is not enough. You must incorporate some type of turnover work within your individual periods and group periods. This is something that you have to get your staff to “buy” in to as well. I will actually put on our practice plan: “Turnover stations last 5 minutes” of each individual and group period. I have a great staff and they want to take advantage of every minute they have during their individual or group period. So, I have to make sure I stress how important it is to have 5 minutes of turnovers mixed in, so we may add more time to the whole Indy and group period so they get covered what they need along with me making sure some type of turnover work is accomplished.

Most of our original turnover stations and philosophy on turnovers came from Rutgers University back at the NYS Coaches clinic we attended in 2009. Over the years we have added and subtracted some of them or simply “tweaked” how we run them to better fit our kids and our program. Most recently, though, we have added to our stations and our philosophy of turnovers based on a lot of what Syracuse University does. Their concept of ball disruption is something we have taken on and we try to drill this into our player’s habits of disrupting the ball. Our belief now is that if you are causing ball disruption on defense that in turn will create more turnovers. We talk to our players a lot about attacking or disrupting the ball more than anything else we do on defense. I think kids now days, need to attach words with drills that will help them understand what we are trying to accomplish. If you ask any of our kids what are key words that describe our defense, they will say ‘attack’ and ‘disrupt.’

Our defensive fronts (based on our personnel) have changed a little over the years, but our philosophy has always stayed the same. We want our players to focus on five main components (see Diagram 2). 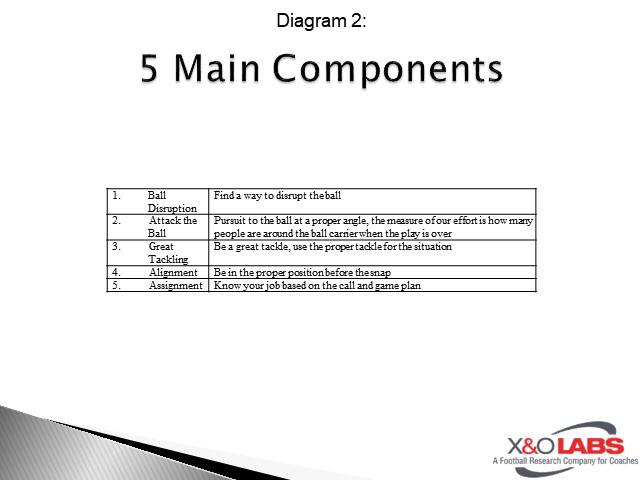 In Diagram 3, you can see our turnovers compared to ball disruption. Since implementing this past season some of the ball disruption concepts to our defense, you can see we actually forced a lot more fumbles and interception opportunities then we have had in the past two seasons. Unfortunately, the ball didn’t always bounce our way. So, one thing we will be doing next year in practice is incorporating ball disruption drills within our pursuit drill. On film a lot of our missed opportunities to turn a ball disruption into a turnover, was the lack of effort in pursuing to the ball, especially on fumbles. The majority of fumble recoveries are not recovered by the person who caused the fumble so everyone must pursue to the ball, because the next person is the one who will get the ball. The same goes for interceptions, if someone breaks up the pass, the caught tipped ball usually is not the person who broke up the pass.