It almost sounds simple to just stop the offense on a third down or to create a takeaway. The Utica College defensive staff bases our defensive philosophy on third down wins and creating takeaways. Yet, this is easy to discuss amongst football coaches. Our staff has developed a system for turnovers based off of verbiage, drills and game stat percentages.

Implementing a takeaway mentality or philosophy to an entire defense must start from Day One. At Utica College, the first night in preseason camp the defensive coordinator, Will Pluff, has his opening presentation. Each slide in his presentation is also implemented and reiterated in other defensive coach’s player manuals. 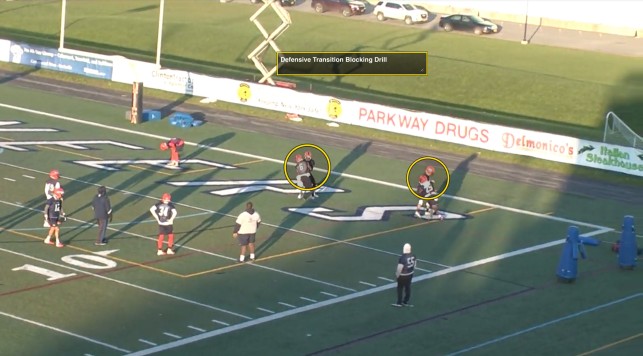 First is our defensive philosophy which clearly states who we are and how we will be successful.  A list is provided for the players to visualize.

We will be successful when:

These points are reiterated by the staff throughout the season.

Next, as a staff, we felt that it is important to have universal verbiage that can be used by the entire defense and staff.  To make these short quotes known we use them regularly in practice and in games.

“Run to the football”

“Finish at the football”