Pursuit drills are not a revolutionary concept for most defensive coaches. In fact, most of us use them in some fashion every year. Our pursuit drills have become the foundation for all our teaching and the backbone for our defense. We are no different in the fact that our drills are not revolutionary, but it teaches our players during this drill everything they need to be successful in games. Our pursuit drill teaches our players pursuit angles, proper run fits including which shoulder and arm to keep free, proper form on our “Hawk tackling”, line movements on pass, appropriate blitz gaps, teaching proper practice tempo in our “Pin the Hip” periods, and finally learning 100% effort we expect on each play.

Teach run fits from different fronts and coverages, proper form on Hawk tackling, proper pursuit angles, and 100% effort. We do not practice line movements or blitzes on this drill.

The drill is set up where you place five trash cans in a straight line to represent the opponent’s offensive line with the center in the middle of the field. There are cones on either side of both numbers and two “rabbits” that are 5 yards deep and 1 yard outside the last garbage can. These rabbits represent the running back and will run with the imaginary ball once tossed. The defense gets aligned based off the call you make as well as the formation you tell them they are seeing in front of them. There are 2 coaches aligned on the numbers 40 yards down the field, one coach behind the center, and the other coaches are 5 yards behind the rabbits. If you are fortunate enough to have extra coaches, you can place one to snap the ball while the other one tosses the ball. 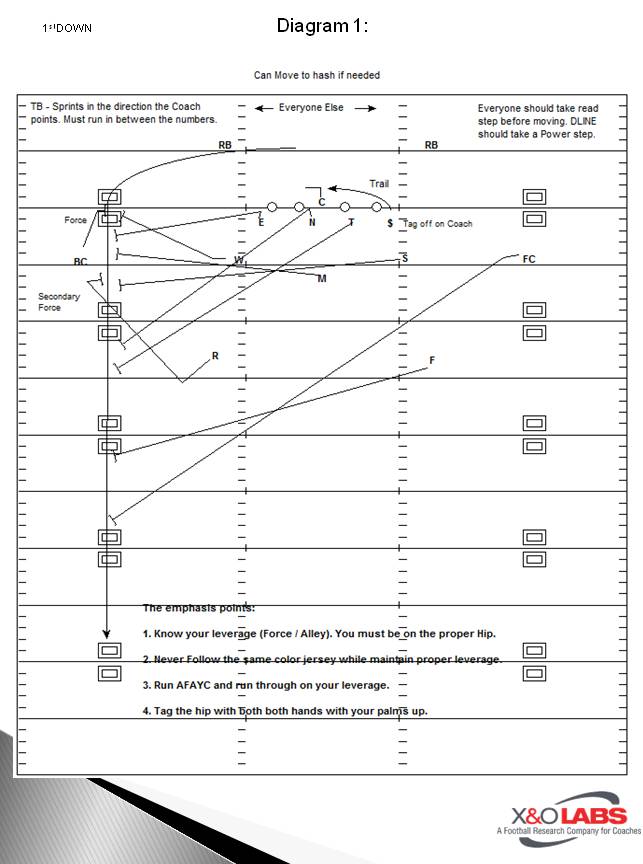 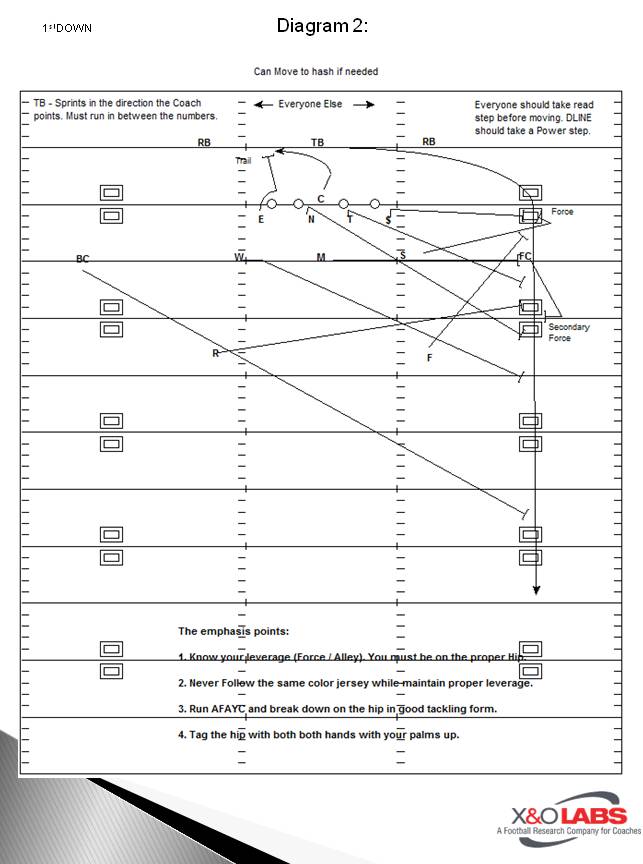 Each player is expected to touch the hip of the rabbit or tag off on the coach. When you tag off on either, each player is expected to be in an athletic position but not stationary. Their fingers should be down towards the ground and their palms are up and as they tag off and they should never impede the rabbit’s ability to run down the numbers. The repetition concludes when the last person has tagged off on the rabbit and the coach. The coaches who went 40 yards down field aligning with the numbers has an important task. The coach on the same side of the rabbit must watch to make sure every player touches the hip of the rabbit. The coach on the other hash is responsible to make sure each defensive player takes their own path and is in athletic position once they reach the rabbit.

We do not want our players to follow and take the same pursuit angle as a teammate. The coaches who start behind the rabbits are responsible for grabbing another player to replace the rabbit quickly for the next repetition. They are also ensuring we have the correct fits on the field. The defensive players are expected to understand their fit before the ball is snapped.

We have 4 major categories the players fall into: