Let’s get one inalienable truth straight: the entire Bear package is designed to stop the run. We know that shouldn’t come as a surprise, but remember the roots of the Bear system is centered around two main objective: get plus one in the run game and eliminate combination blocks at the point of attack. If teams are running the ball on Bear, there is a technical problem, not a structural one. In fact, when Virginia Tech used the Bear package they surrendered 2.9 yards per carry. That is nearly one yard less than what the Hokies gave up per run play using any other defensive structure.

Level Reads on Single Back:

Foster and his defensive staff place a premium on the horizontal and vertical level of the offset back in one-back offenses. In fact, the Mike will call out the level of the back on every snap because it affects how the defensive line, Mike linebacker and secondary defend the run game. Foster was hell-bent on this being a big key to decipher which run or pass concepts can be used. He told us that a lot of what he does with his front is based on the anticipation of the play concept he is getting with the offset in that position. He did tell us that the level could be disguised if the team has a dynamic center and the ball gets back quickly, but in most occasions this is not the case and the back cannot lie in order to get to the mesh point. Since the Bear package puts a nose on a zero technique on that center, it’s much harder to both snap the ball and block efficiently. In any case, we detail each of these levels below. 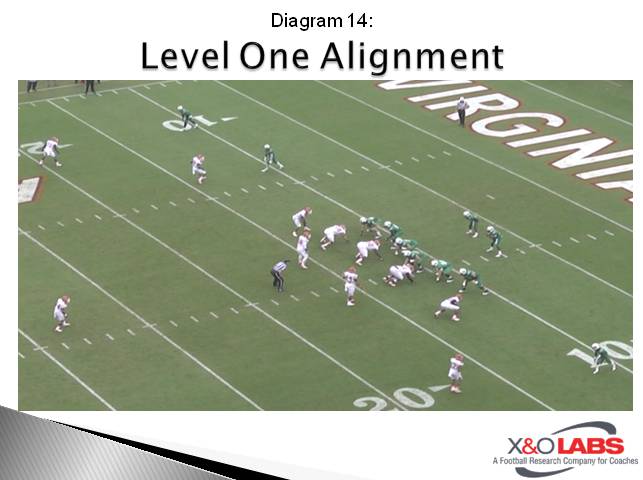 Definition: The offset is even or parallel with the quarterback.

Play Concepts Anticipated: Perimeter run game such as speed sweep, outside zone or power read. There is also a high tendency of pass because of the offset’s proximity to the A gap.

Affect on Defense: In level one, Foster will have the Mike key the triangle (center and two guards) to detect any pullers for power read. “He anticipates some kind of pull so he doesn't fly out of there,” said Foster. “It’s either full zone or the power read stuff.” 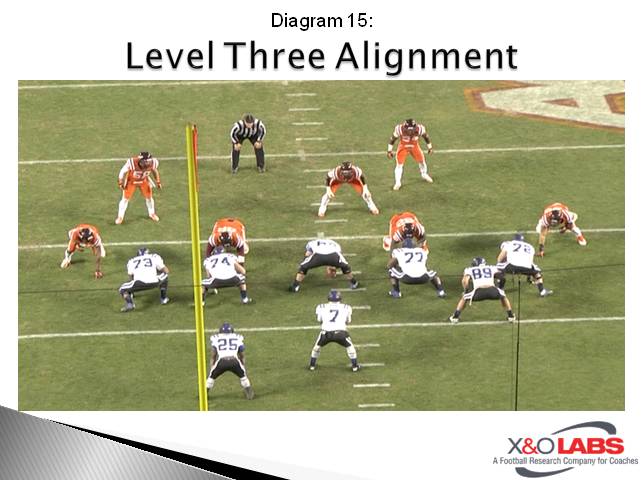 Definition: The offset is behind the quarterback.

Affect on Defense: Foster will generally will spark the A gap away from the back with the nose and have the Mike run through the A gap to the side of the back in order to draw the combination block of the guard (Diagram 16). “Our Mike is 5 to 6 yards deep as a base,” says Foster. “If it’s level three, he may tighten up because you’re getting zone. He runs through the A gap if he has a level three pre-snap picture.” 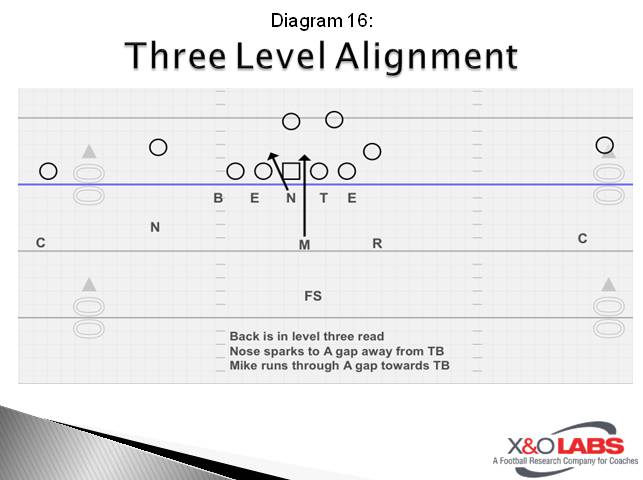 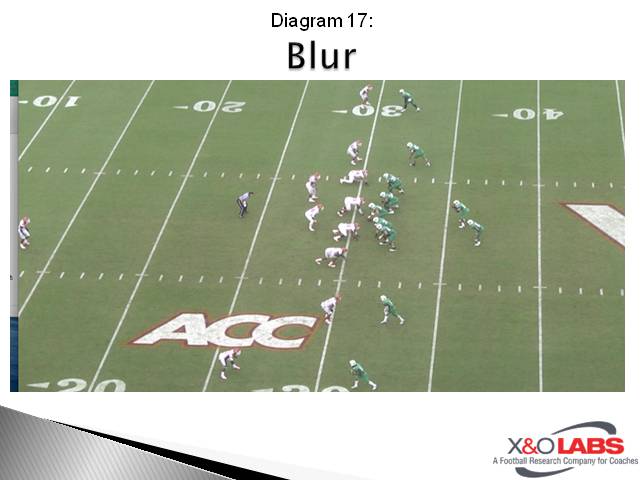 Definition: Foster calls level two “blur” which means that it may be blurry, or unclear, whether or not the back is in level one or level three. Maybe the offset’s toes are at the heels of the quarterback. “It looks like level one but it may be level three but they are just deep enough,” says Foster. “He is just a little behind the quarterback. People will try to fudge it, but they often get too deep on the speed sweep and a bad snap will throw off the timing on that thing.”

Play Concepts Anticipated: Could be a mixture of tight zone and wide zone schemes.

Affect on Defense: Foster admits that a lot of film study goes into deciphering what play concepts teams are using out of blur looks. One of the things he will do is use a “Spill” call to the side of the back, which is described below.