Using Force and Vise Fundamentals to Fit the Run Game 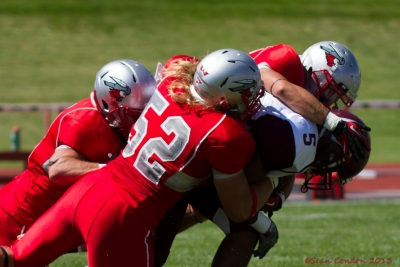 Our defensive production in 2011 forced us back to the drawing board. We had just allowed over 190 yards per game rushing on our way to a 10 loss season. When our opponents ran the ball our fits were never consistent. From week to week, we tweaked our fits to match each offense and it really slowed our players down and often led to missed assignments. After much reflection, we realized that we needed to do was simplify our system after a disastrous year to allow our players to focus on the essentials of defensive football; running, tackling, winning their one-on-one matchups and playing with a killer instinct.

With that said, we didn’t want to restrict our calls because many offenses require us to give different looks and make in-game changes to coverages, fronts and blitzes. Instead, we created a structure with simple rules and terminology to allow our players to play fast and attack the offense. By keeping it simple enough that everyone knows all the rules, we found we rarely get players asking us “who was I supposed to have that play?” We also noticed that our players felt much more comfortable doing their own jobs and our missed assignments went down.

To begin with, we are a base 3-4 structure, so we designed our system using the four linebackers as the key components to stopping the run with the idea that we can create an 8-man box by blitzing one and replacing him with a safety. The first guideline we teach our players is that if they are in the pressure (LB, DB or DL), they play the gap that they blitz through and splatter (spill) all second level blocks by playing the inside half of each second level block (Diagram 1). We term all pullers and RBs as second level blocks. This prevents our players from being trapped and allows us to change the fits, as an offense sees it, depending on who is in the pressure and who is not. 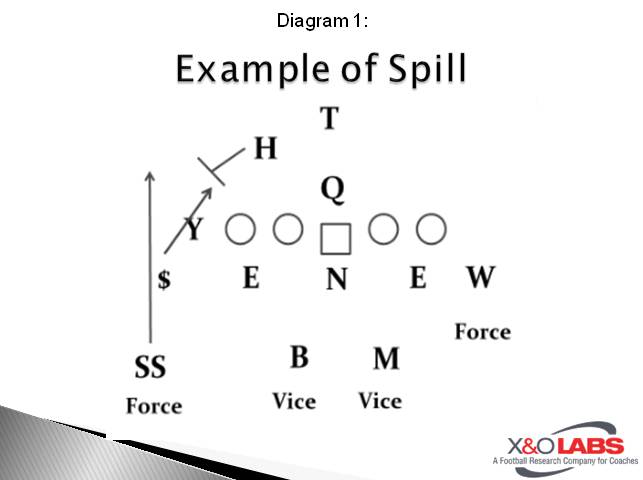 The “Vise” player’s guidelines are to try to fit the insert block on the inside and outside half like a vise.  We teach the front side “Vise” player to do one of two things based on own size.

The back side “Vise” player is responsible for staying behind the ball and playing all cutback runs. Often times this means that when the ball goes wide, he becomes a free runner. We can also blitz an interior linebacker and replace the “Vise” with the safety dropping inside (Diagram 2). This concept is easiest to see in our 4 under 3 deep concepts, as we will have two “Force” and two “Vise” players at all times. In this concept we remind our “Force” players to cage everything and we ask our “Vise” players to bump to the “H” back/receiver to allow for downhill fits. They should always be looking to leverage the ball to the nearest “Force” or “Vise.”