Training the 4i Technique Defender

I recently wrote a sort of manifesto, putting the defensive system that I have adapted and evolved over the course of my almost 20-year coaching career into words.  I want to share part of the introduction to that report:

“I have read many articles promoting the value of playing multiple fronts and although I understand this value, I believe that it also promotes the ‘Jack of all trades, master of none' mentality. In our system, we talk about playing a singular front with multiple coverage checks and adjustments. Our players are given visual keys and taught that action leads to reaction. If they can master this action and reaction, I believe that we can compete. In high school, we have to coach the players that show up and at times those players will not be the most talented players on the field, but by concentrating on a singular front we create mastery, it is this mastery that defines ‘What We Do.'"

It may help to understand that I began putting my system into a series of formal articles as I accepted a new position as the defensive coordinator at Sachem North High School, the district where I live and where my two boys will play football. I was asked to bring and install the defensive system that had led my previous school to a Long Island Championship.

In my original report, I spoke, in a general way, about a 3-4 defense built around a box that rarely changes. We play a 0 and two 4is with two ILBs aligned at 5 yards over the guards almost 100% of the time. By consistently, “Closing the Box” we can through automatic coverage be prepared to play against a multitude of different offenses. We believe that this consistency allows us to be a sound high school defense year in and year out.

The purpose of this report is to detail how we teach the 4i. It is ultimately this technique that is perhaps the most important and yet most overlooked part of any sound 3-4. I recently listened to a podcast on the 3-4. In this podcast the host spent over an hour discussing how the 3-4 is successful because it allows he said it requires you, to move your defensive line on almost every play. He spoke of his slants and stunts and how it created confusion for the offense by changing gap responsibilities. Although I understand and accept this philosophy, I found myself wanting to engage in a debate. I believe the value of the 3-4 is you can simplify gap responsibilities. By mastering the 4i technique you do not have to move or slant. This allows your LBs and DBs to fit into consistent run fits. I am not saying we never move, but over the course of the game, we are in a base call that majority of snaps. I believe that we must be able to defend soundly any offensive challenge that we face in our base defensive call. The key to doing that is the 4i.

The reality of coaching at public schools is you have to have a system that adapts to the strengths and weaknesses of your team on any given year. To be a dominant 4i you do not have to be any size and shape. I have found success with all types of players. I have never had the 6'2" 250lb DE that many of us envision when we think 3-4 DE. The key to this technique is a selfless, disciplined kid. A player who is willing to trust his visual key and smart enough to react with the proper action. More important than his physical attributes are his ability to recognize and react. Just to prove this point, I am coming off the most dominant defense I have ever coached. Statistically, we were the best defense in Suffolk County and a top-three defense on Long Island. My two kids that played the majority of the 4i snaps were average players at best. However, they played this technique very well. One was a weight room kind of kid, 5'10" 215 and strong but slow and not very athletic. This player worked very hard to master this technique and through his dedication became an All-Division player as a B gap dominator. The other player was a little bigger 6'1" 230 but not nearly as strong or dedicated in the weight room. He was a bit faster and more athletic but not nearly as strong. He was a returning starter who seemed to get better with experience. He was also an All-Division player. These two did not have dominant statistics but by controlling the B gaps through the 4i technique they allowed us to be a championship-caliber defense and were recognized. 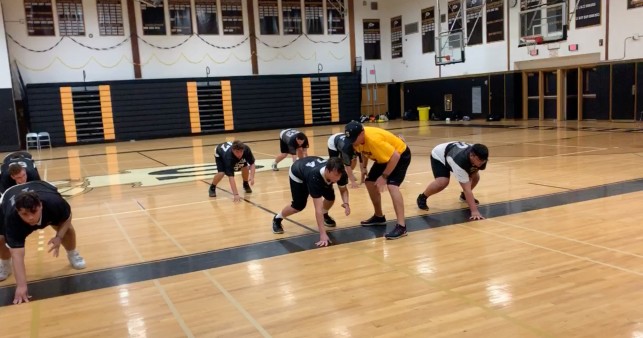 4i Stance, Alignment, and Start

We begin in the winter by teaching all linemen and OLBs the 4i technique. This technique is so important to what we do that it must become a habit for our kids and the more kids that have mastered this technique the more competition we will have during training camp.

We start with feet a touch wider than our shoulders and a slight stager with our right or left foot depending on whether we are in a right- or left-hand stance. We teach both right- and left-hand stances and require that players can play out of both. Once players have their feet set, I ask them to sit on an imaginary stool with their chest out and elbows on their knees. This sets the angle of their ankles and knees and creates the overall position of the stance. I then tell the players to, keeping their ankles and knees locked roll/ fall forward onto both hands. Their hands should be slightly in front of their heads. If they kept their ankles and knees locked, they should have rolled into a powerful, balanced stance with their hips slightly above their shoulders. The last thing is to lift their off-hand off the ground if players are not strong enough to fire out of a three-point stance I have them stay in a four-point stance. My commands for teaching this stance are. “Set your feet, sit on a stool, Roll/Fall forward, Offhand up."

The 4i will align with his down hand on or near the inside foot of the offensive tackle. We tell the 4i that he must be aligned on the frame of the tackle, he cannot be in the gap. Depending on the player his alignment will be slightly different. He must be in a position that the tackle can never scoop him or cross his face but also be in a position that he can touch the tackle on any sort of reach scheme. Ultimately the 4i is a B gap dominator. He will consume the B gap and dominate any blocking scheme in the B gap, including inside and outside zone, power, trap, and option.