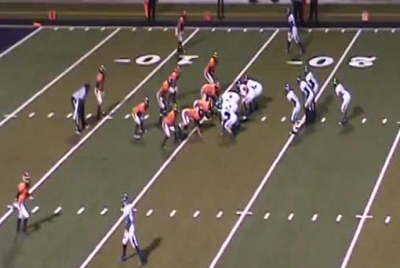 We are a 3-5-3 defense in our base alignment. The reason for this is that it’s easy to teach from junior high and add in the elements and aspects that we need before high school. It allows us to have success in all levels without sacrificing losing for trying to teach kids how to understand the elements of football. It’s much easier to go ahead and have 8 men in the box at a junior high level than it is to try to teach a free safety or strong safety to play downhill and also cover the pass.

We play a 3-5-3 defense, but the qualities for positions we look for is more like a 4-3. We play a strong outside linebacker and a weak outside linebacker. Our weak outside linebacker is going to be a strong safety type kid. He’s strong enough to play inside, but fast enough to cover the number 3 on a vertical in a trips set if they run 4 verticals. It’s pretty easy to find our weak side outside linebacker, he’s normally the best all-around athlete we have. We put him there because this position requires a lot of versatility. This benefits us because we never have to do a lot of substitutions to match up against an offense.

Our strong side outside linebacker is going to be a bigger stronger kid that can play with his hand up or down and can spot drop to the flats. Those are the basics of what it takes to play that position. Inside, we play a Mike, Sam, and Will linebacker. Our Mike will be our best tackler and has to be able to run. Our Will and Sam need to be able to run and also need to be smart kids. Our read force is based primarily on them recognizing the formation and reading blocks and flow to get where they need to be. We run a few different coverages. I know a lot of people will tell you to find one thing and get really good at that. I truly believe in that statement. We mix up our coverages quite often, but keep it as simple as possible. Coverages are important when talking about force reads. You have to make sure you keep everything working together. We have five different force calls we can make. A force call will be made once the defense recognizes the offensive formation. A defense should be a well-oiled machine. Everyone has to do their part on every play, it doesn’t matter if you execute up front if you can’t keep it locked down in the back end with the secondary.

Out of our 3-5 base, we will play five force concepts with each being dictated by the coverage that we are playing. Each of these concepts is based off of our Read Force concept, which will be addressed first. 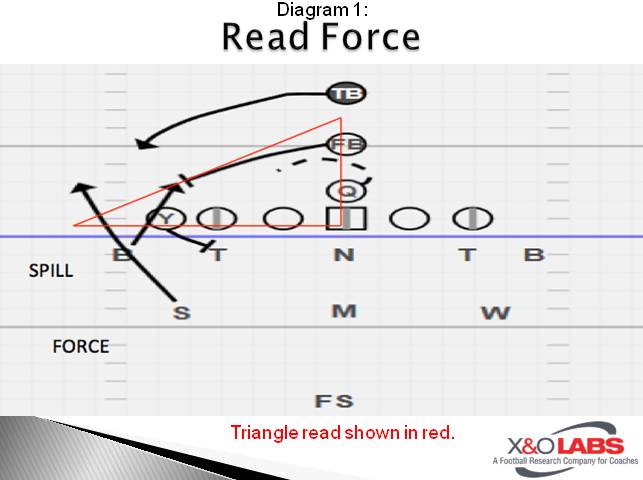 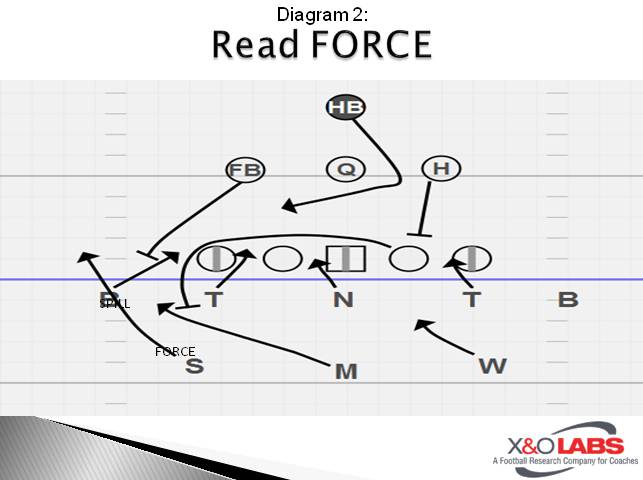 Nothing changes when we see a Power scheme. In that situation, the SOLB reads his triangle and sees the FB heading out at him. He knows his responsibility is to attack his inside shoulder and blow up the FB to keep the running back going horizontal. If the running back tucks the ball back inside the fullback’s block, the OLB makes the tackle. If he spills outside, the Sam is now our force player with our Mike and free safety play clean up on the back.