We’ve found that most odd front coaches do not typically stay in the odd front, they will stem and shift with a good deal of consistency into even front structures. Our research indicates that the majority of odd front coaches, 38 percent, will move their front three defenders on at least three quarters of snaps. We’ve also found that 61 percent of coaches will move those defenders both pre and post snap. 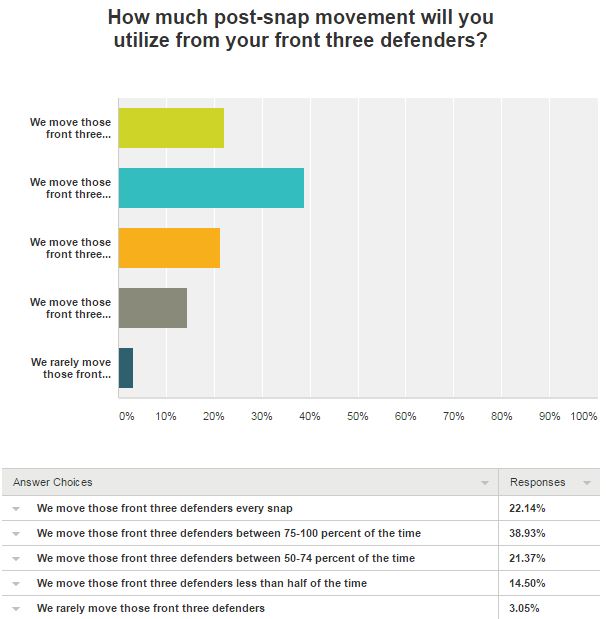 Most of these movements come in the form of “reductions,” which essentially means where the first level B gap defender (or 3-technique) will be placed either pre or post snap. We found that the three most common reduction placements will be formed in the following ways:

The majority of odd front coaches will reduce to the boundary more so than the field. The reasoning is to get a 3-technique to boundary while slanting to the tight end or three man surface side. We found that the majority of coaches, 27 percent, use a quarter, quarter half coverage structure in boundary reductions.

Some specific reduction concepts are detailed below:

1. Call strength to the passing strength.
2. If ball is on the hash, strength is called it to the field regardless of formation.
3. If ball is in the middle of the field, it goes to the two quick receiver side.
4. If it’s balanced, strength goes to the quarterbacks throwing arm or the offset back in one-back.

The Under front is a pre-snap movement that moves the stout, boundary end, to a 3-technique. The nose is in a shade, while the field defensive end is the 5-technique (Diagram 40B). The coverage is a two-high pre-snap look, but eventually will roll to some form of cover 6 or quarter, quarter half coverage. Off of this front, Coach Acquarulo will use several post-snap movements based off of call. Several examples are below: 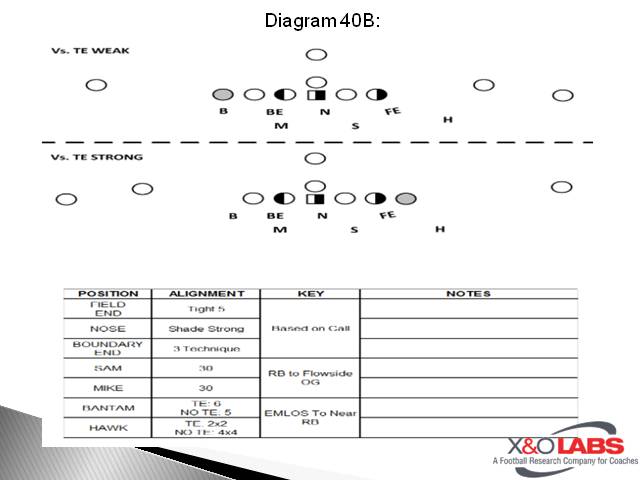 Under Go: This is a two-gap movement to the tight end side. The boundary defensive end contains through B gap and the nose works across center while reading the guard. “If the guard blocks back, he crosses face. If not, he works into A gap,” said Coach Acquarulo. “The Bantam will be the dropper in passing situations, but if it’s run, we tell him to step to the tilt and make the tackle block him. As soon as color crosses his face, he chases (Diagram 41). 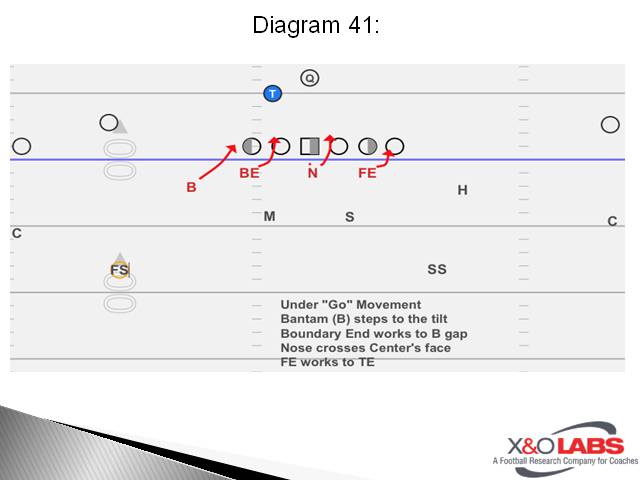 To see cutups of the Under front reduction, click on the video below: