The presence of a closed tight end may raise some concern for odd front coaches and for good reason: it creates an extra gap along the front. So in order to account for that space, we found that 45 percent of coaches will use a 5-techinque alignment with that player. This was only four percentage points lower than the 4-techinque alignment, which was the most common answer. Only 5 percent of coaches chose to stay in that 4i technique alignment that is synonymous with the closed or boundary side defensive end. 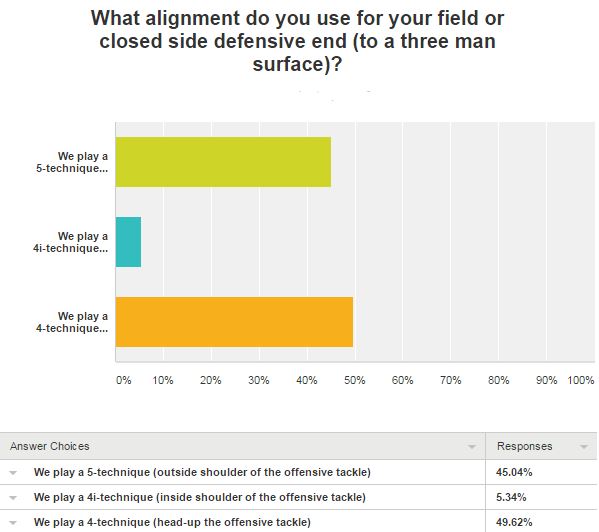 Characteristics of the Closed Side (three-man surface) Defensive End

We surveyed coaches to find out the differences in technique between the boundary and open side defensive end. Many of our responses stressed the need for this player to be explosive with his hands and “rangy” enough to cover ground to the field side. We found that many coaches will also target this defender to be one of the better pass rushers among the front because he will mainly be matched up with the tackle. While this report is purely focused on defending the run game, we did want to highlight which characteristics coaches were looking for to fit their personnel in defending the run.

Below are some of the qualities that odd front coaches look for in developing their field side defensive end:

Coach Sturgis, Clinton Central High School (IN): “Our defensive end to the tight end side is typically a little of a better of an athlete than his counterpart to the open side.”

Coach Busmente, Sterling High School (CO): “He’s more of a plugger type for us and less athletic than our 4i technique. He’s most likely bigger.”

Coach McClain, West Laurens High School (GA): “We prefer a bigger plugger here if possible. He’s more like an athletic 3-technique in the even front. This guy will bump down into a 3-technique on occasion and we want a run stopper here.”

Coach Sarchet, St. John Paul the Great Catholic High School (VA): “He’s probably a bit bigger than the open side tackle. We don't look for kids to get up the field as we do as maintaining gap control, taking on trappers, and squeezing our feet.”

Coach Godwin, Gulf Breeze High School (FL): “This player has to be a little leaner and longer than the other two defensive linemen. He needs to have more speed because there is more ground to cover in defending the run game.”

Coach Desrochers, Sunrise Mountain High School (AZ): “We are looking for the lineman who is long enough and tough enough to play against a tight end, yet has enough wiggle to get a good rush on.”

Coach Baechler, Canton High School (MI): “We normally will have him be our Loop or C gap tackle. We would like him to be a bit bigger, but again speed and strength are more important than size.”

Technique of the Field Side (3-Man Surface) Defensive End

Once that player has been identified, we researched exactly how odd front coaches were training that boundary side defensive, based on the blocks he was seeing.

Some of our survey responses are below:

Coach Busmente, Sterling High School (CO): “He must drive into the tackle and help squeeze the B gap. He cannot get his shoulders turned out by the offensive tackle to create a seam there. Try to keep the outside arm ‘free’ as much as possible.”

Coach Bell, Missouri Western State University (MO): “We have two distinct stances that we teach our kids. We have our ‘BASE’ stance and our ‘JET’ stance. In our Base stance, our kids’ feet are wider than their shoulders with about 40% of their body weight on their down hand. We have flat backs with our off hand up and ready to strike the offensive line gap shoulder in front of us. We align with down hand to man, so our kids have to be comfortable with either hand down. On the snap of the football, our kids are coached to shoot their off hand, or what we call their GAP hand to gain control of the OL gap shoulder. Our kids shoot their down hand to the V of the neck. Their first step is a very quick 6" step and their eyes are trained to go from the ball to the offensive line screws in which they are aligned on. If they are aligned in a 4i or 2i, their eyes go to the offensive line to inside of them for a quicker read on against zone schemes. If the kids are head up on our nose, then they can put whatever hand down they are most comfortable with and they shoot both their hands to breast plate of the offensive line and are looking to get vertical push after the first initial 6" step.”