DL Head Up Techniques in an Odd Front

Editors Note: Coach Miller has 18 years of coaching experience with 7 years on offense and 11 years on defense, with the last 5 years as a Defensive Coordinator / Assistant Head Coach at Taylor HS a 5A school in Texas. He has experience at both the high school and college level.  In 2011, was recognized as Katy ISD’s Boys Sport Assistant Coach of the Year. Miller has his Bachelor’s and Master’s Degrees from LSU.

This article is intended to define fundamental techniques for defensive linemen within an ‘Odd Front".

Why employ an Odd Front Philosophy of defense?

Our first consideration is always our personnel and what we have to defend. An inherent and unique characteristic of high school football is the fact playing football is voluntary. High school coaches cannot ‘recruit’ or ‘draft’ for a specific offensive or defensive scheme. Coaches place athletes in positions where they can maximize their abilities and help the team become successful. Some of these determining considerations are:

Within those position assignments, the scheme applications are designed as a coordinated help for the individual players abilities. We define our ‘odd front’ through a strength declaration and an identification tag word. The ‘strength declarations’ can be made in seven different ways:

The term ‘Base’ defines the front alignments (Diagram 1). 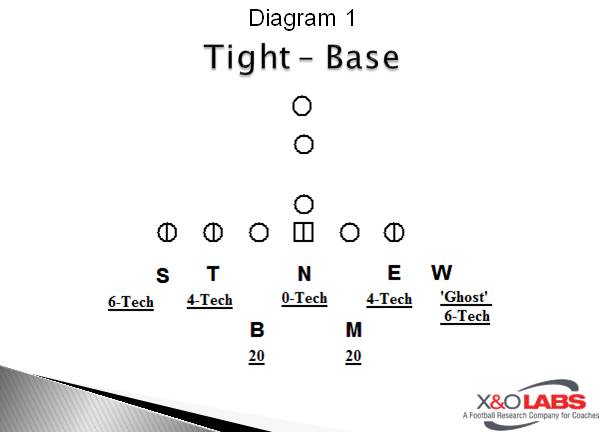 The presence of the "0" technique noseguard and two ‘30’ backers over each offensive guard places three defenders over either A-Gap. (Diagram 2) 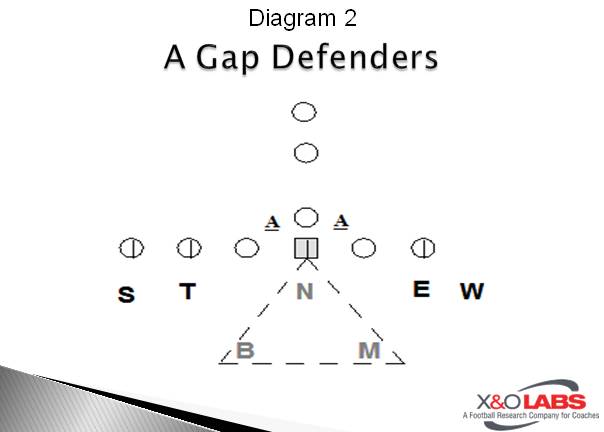 The ‘Odd Front Structure’ places ‘Direct Pressure’ on the first person handling the football, the center.

The foundation of teaching / coaching these head-up techniques is physicality. Assuming a head-up alignment increases the likelihood of having to take on an offensive lineman’s initial charge right down his midline. This places a greater emphasis on the defensive lineman understanding and applying proper pad level, striking out of the hips with a blow and separation.