Defending 2 Back Runs and Heavy Formations from the 3-4

We are a base 3-4 cover 2 team with our defensive linemen aligned in a 4-0-4 front.  Our defensive line is usually bigger kids that must demand a double team and can eat up blocks. Our End is the more athletic of the two tackles. He will bump to a 5 at times. Our Tackle is a true Defensive Tackle that will have to play 3 at times. We teach our defensive linemen a shade technique for when they are lined up on the shoulder of an offensive lineman and a head technique for when they are lined head up. Our inside linebackers are decent runners, but they have to be able to get off blocks and make tackles. Our outside linebackers must be able to play the curl area in pass and set the edge or play a 9 tech against a Tight end. Our Corners are our best cover guys and our safeties need to be our best tacklers. We have adapted our defense over the years to try to stop the spread attack. We no longer start our defensive installation with defending the Pro formation.  We now start with defending 2x2. The way offenses are utilizing H back/Y off formations and TE’s now can pose a problem for that. When defending 20, 12, or 21 personnel offenses the first thing we want to do is make sure we can account for the extra gap created by the H back or TE. The second thing we want to do is make sure we account for any passes off their run concepts. We use our OLBs and our Safeties to account for both issues created by the offense.

We keep the alignment of our front five the same when defending 20 and 12 personnel. We want to take way gaps from the inside out. We play our tackles in 4s, they will utilize our head technique. They are responsible for the B gap on runs and they are contain rushers against pass. Our nose is aligned in a zero. He is the backside A gap player. We want our nose to disrupt the middle as much as possible while maintaining the backside A gap. Our ILBs align in 20s and are frontside A gap players on runs away and scrape players on run to. The ILBs are fast run fitters. 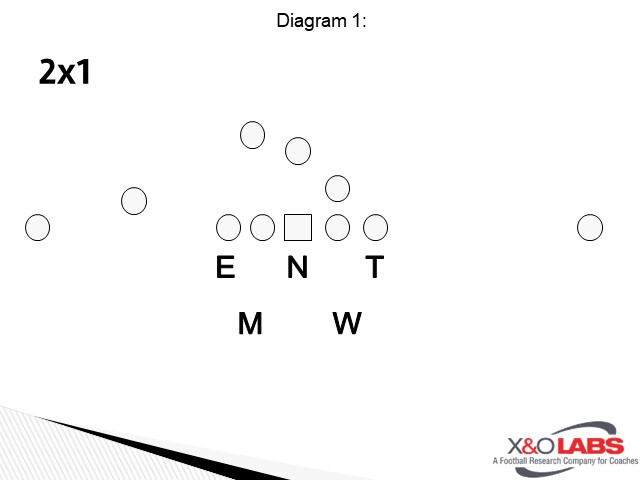 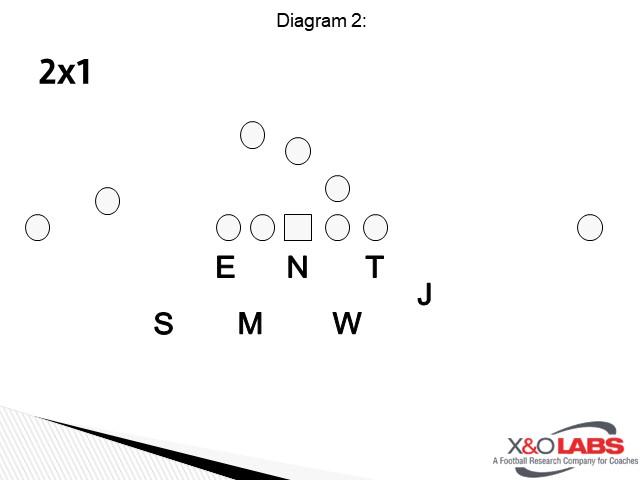 The Sam and Jack are force players vs any run to them, and they are cutback players vs any run away. Because they do not have to fit fast into the box, they can hang in the slant window for a second to prevent any pass off of the run action.

The Strong Safety will align 12x1 off of the #2 receiver. He is a pass first player. His job is to fit outside in vs any run to his side and to play long cutback away from him. The Free will align 5x7 off of the offensive tackle to the single receiver side. He has the same responsibility as the Strong. 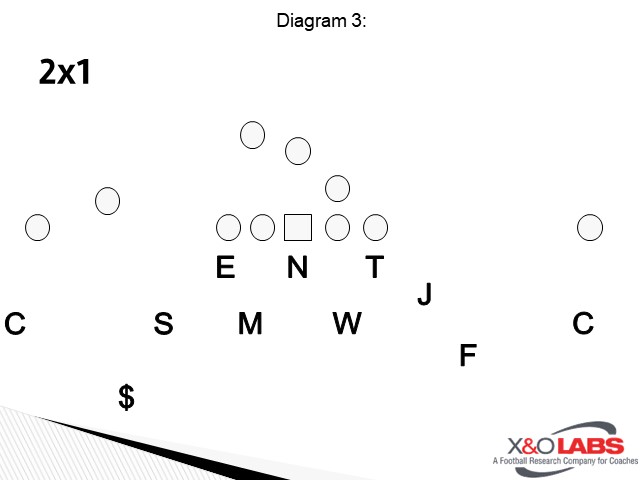 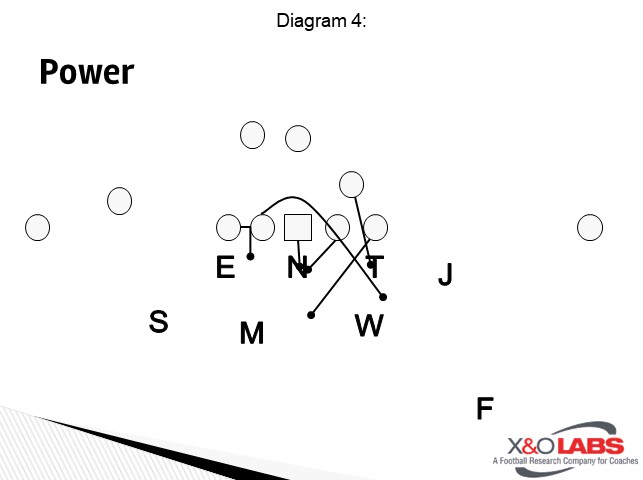 Diagram #4 shows a typical way that people block us when running power.  The H back will create a new gap on either side of the center depending on whether they are running Power or Counter.  I will describe how each position is to play the blocks they are given.

End- Attack the breastplate of the Offensive Tackle. fight the cut off block and get into the B gap the guard is pulling from. If the Tackle gets down really hard, we can come off his hip. He just must make sure the b gap is secured.

Nose- Attack the breastplate of the Center. Try to create knock back and fight pressure. When the guard doubles he wants to get his hips in the crack and hold his point as much as possible to keep the backers free.

Tackle- Attack the breastplate of the Offensive Tackle. Squeeze the down block. Splatter the kick out block from the H by attacking his inside pec and getting under the block.

Mike- Attack front side A gap.  If it is closed, scrape to B anticipating a block from the Opposite offensive tackle.