The benefits of the reduction front lie in the ability to play both even and odd looks on the snap of the ball. Its simple spacing keeps box and spill defenders consistent without an immense amount of checks. At Massillon High School (OH) co-defensive coordinator Spencer Leno uses two base reduction principles (Up and Eagle) to help solidify run fits by playing single gap control (and no two-gap) defense.

At its core, Massillon is an “Up” Front defense. 3-4 spacing, with two interior linebackers, a hybrid strong safety or outside linebacker and a hybrid defensive end/outside linebacker. With the strength set to passing strength, the outside linebacker is the most critical component of the defense. He and the Sam linebacker are apex defenders against a removed number two and key the EMLOS for both run and pass reads. They are box defenders against the run game and will attack the line of scrimmage. The 5-technique and shade are to the “Sam” linebacker and the 4i and OB are set away. The 4i is aligned over the offensive tackle but will key the V of the neck of the offensive guard, essentially playing a 3 technique from 4i positioning. 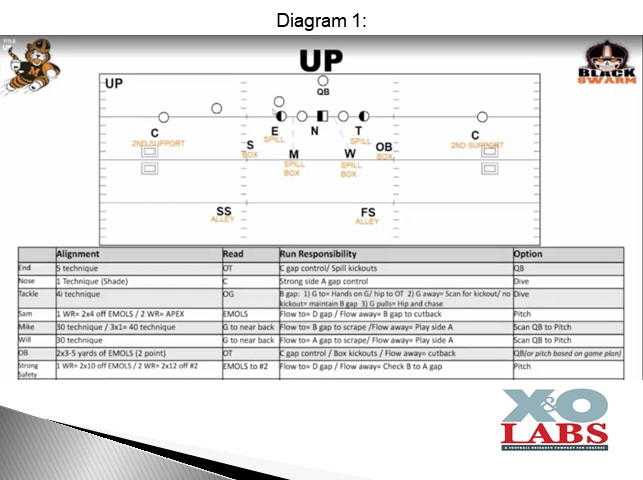 The changeup front Massillon uses are what they call “Eagle,” where the OB walks up on the tip of the offensive tackle, reducing the Tackle to a 3-technique. Everything else stays the same. 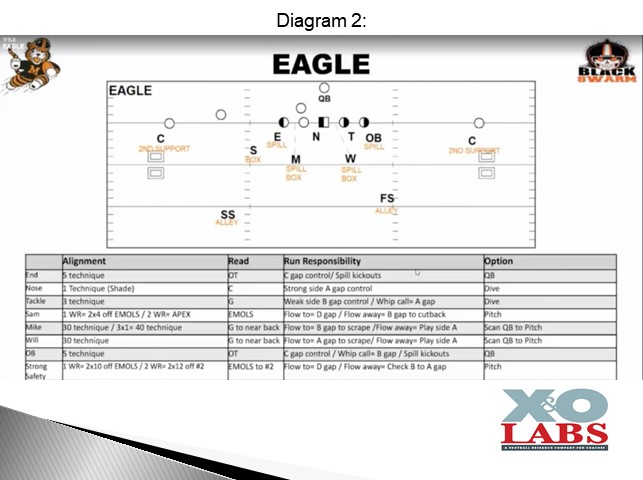 Where Massillon differs is the way in which they play the Odd front. They are not a two-gap outfit and will work to attack the “V” of the neck of the down lineman for two essential reads: if the offensive lineman comes at them, they play vertical. If the offensive lineman works downhill, they squeeze and spill chasing pullers. The difference lies in that 4i technique. If he’s playing a true 4i, Coach Leno works to have him work down the line of scrimmage and chase pullers. If he’s playing a 3-technique, he’ll work to squeeze down blocks to play the jump cut lane on cutback. In both circumstances, they are Guard read defenders.

Since there is no two-gap technique across the board, the Nose is a shade with a single purpose of getting his hands on the Center. If the Nose feels pressure from the offensive Guard, he “hips” the Guard but doesn’t fully turn, keeping both linemen on two different levels preventing them from getting hip-to-hip on the double team or working to the Mike.

Both safeties key number two pre-snap and are in a palms coverage scenario. They have a man-play-man rule, which Coach Leno describes that their initial read is #2, then they become a surface to alley defender. If there is no number two, the safety is reading the end man on the line of scrimmage, making the outside linebackers correct. This helps with the consistency of OLBs as box players and safeties as alley players keeps the run fits fast.