The innovation of RPOs has become a nightmare for defenses over the past few years. This is due to the gap discipline needed for zone runs and high percentage routes that are basically glorified runs on the perimeter. It is really a true spread option that makes defenses cover so much of the field. Which leads to the fundamental question that DC’s are being forced to ask:

What coverage to play behind the front and how to fit and read the run?

Both split safeties and single safety looks have strengths and weaknesses in what the shell structure defends. The core 5 or 6 in the box of the defense has to have discipline and gap integrity to stop these zone run schemes. Think about the 6 Gaps in 10 personnel and 7 gaps in 20 personnel plus the extra hat that the running QB has to be taken into account. In my opinion, 2 back offenses can require 3 deep zone for the 8th hat closer to the line of scrimmage (LOS). The key is figuring out whom the read keys are and if the numbers in the core or perimeter defense will affect play calling.

The 3-3-5 can manipulate into a variety of fronts by either slanting, blitzing or alignment to confuse offenses and traditional blocking schemes while still maintaining the simplicity of 4-2-5 reads. The defense can be more calculated than a 4 man front by choosing where the 4th rusher comes from to affect a heavy tendency or down and distance. In addition, it is advantageous to have 5 defensive backs to defend RPO concepts.

In high school football, the majority of the game is played on the hashes which can give space advantages to the defense. In addition, we figure that high school QB’s are average to below average at throwing the forward pass. This limited space into the boundary makes throwing a boundary speed out much easier than throwing to the #1 receiver into the field which could end up being a 40 yard throw. Try and catch a tendency to see if this theory holds true. RB alignment can be a great run/pass tell and allow a defense to set great fronts or get into great coverages. Also another alignment tendency can come from an H-back alignments and wide out splits in relation to formation and MOF.  Talking to offensive guys from flex-bone to air raid, a common theme is highlighting the playmakers on their offense. So defend the comfort zones and what the offense wants to prioritize.

Defensive line play is going to be a huge key in stopping runs by either playing technique (LOS Control) or moving/slanting. Slanting a 0 technique nose away from the RB for heavy inside zone run teams can dictate what gap the ball is pressed. The nose can work up field after slanting into the play side A gap and having a back side A gap player which would be our Mike backer in base stack. So when the back presses and cuts back, a hat is in the back side ‘A’ gap ready to make a tackle. 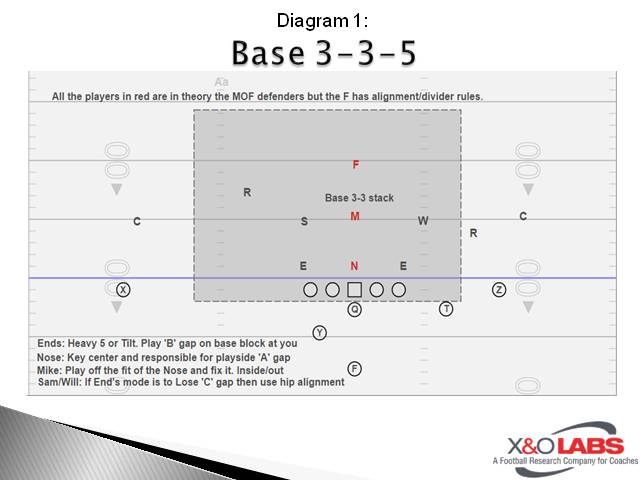 A tilt technique from the defensive end gives a better first step to squeeze on down blocks or zone away. Taking a 5 technique that’s square pre snap and angling him 45 degrees can allow a wide hip technique from the outside backers to make them hybrid core/perimeter defenders. This allows them to align with some width to get closer to slot while still be able to fit in the box. If you tilt a 5 technique, assume that he is a ‘B’ gap player because any base or reach at him is difficult because he is not square to the line of scrimmage (LOS) and first step is down LOS which makes it almost impossible to stay in c gap. Teaching three to four blocks to the defensive line can simplify the reaction and thought process a player needs to comprehend both mentally and physically. Not just about the initial read but the post snap read progression.

In the video link below, the End in boundary gets a reach block and fits in “B” gap and outside backer in boundary is  in Hip alignment. Also note that the 5 tech to the field is doing a great job of squeezing the block and spilling the football.