In today's game, we see so many opponents who place a premium on having a dual-threat quarterback with run/pass options. Our staff utilizes a multiple scheme that shows both 3 and 4 down fronts with the mindset of trying to dictate the tempo of the game from a defensive standpoint. In an attempt to combat difficulty forcing the perimeter versus a mobile quarterback, we installed our 5 man “Bear” front while using Nickel personnel. We found that the concept gives us the best advantage to effectively apply edge pressure and contain the pocket while remaining strong against power run schemes. Scheme aside, we believe that the most important aspect of any well run defense is the overall ability to align properly, get off blocks and most importantly tackle. The scheme is primarily run out of a man to man coverage alignment, which we call MEG (man everywhere he goes). In our base Bear look, we play Cover 1 almost 65% of the time and use a Cover 3 “Robber” scheme as a zone based changeup. Our 3 Robber coverage is derived from our Cover 8 variation of quarters in which the SS/OLB on #2 will take outside leverage to funnel all flow towards the middle of the field, where we have a safety or MLB jumping the route with inside leverage.

This scheme derives from a traditional 46 bear defense used commonly against 21/22 personnel power running teams. We keep our Nose in a 0 technique and have modified by shifting the End/Tackle into 4i’s. This allows the E/T to have better leverage versus a down block from the OT and combo blocks that include a TE or H-Back wing.

Our hybrid DE/OLB “Rover” is our weak side edge rusher and we ask our Mike LB to walk up in this package to become the strong side edge rusher. Both of these players are “box force” players versus the run (discussed below). Walking the Mike LB up to the line of scrimmage (LOS) allows for us to keep an extra safety on the field, as opposed to a traditional Sam LB in a 34.

The Will LB is the most critical position in the unit. He is stacked 5 yards off the ball behind the Nose Guard and acts as our runner. He plays inside-out as he reads through the “big triangle.” In cover 1, our CB’s are in MEG on #1, while our Strong Safeties play #2. Against a 3x1 set, the weak side SS, which we label the “Cougar,” will bump over to cover #3 to the strength. This leaves the Will LB to be responsible for the RB. It is vital that our edge rushers do a great job in rerouting any RB quick release to help the Will in this situation. The FS, our “Bandit,” is aligned at 10-12 yards and acting as a centerfielder to assist the CB/SS on any Vertical or Post routes. At the same time, he must be able to attack downhill to become an extra secondary support run defender. 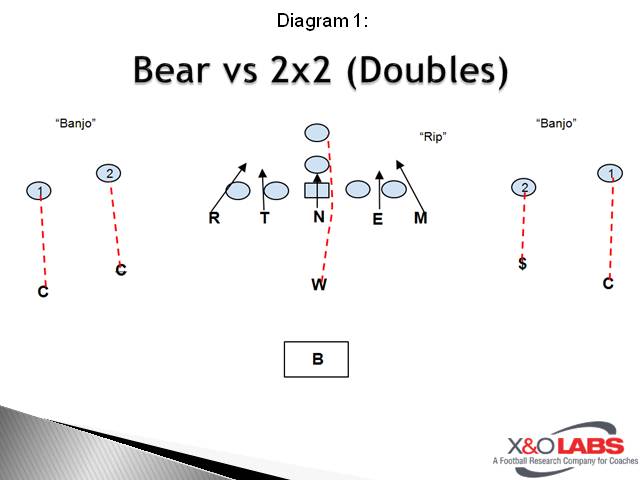 DL: Against a spread 2x2 set, we play a 6-man box. The Nose is a 2-Gap run defender reading the “V” of the neck of the center. We train this player extensively to use his hands as a way to shock and shed the center while maintaining a strong base to set the middle of the formation.  Our End/Tackle players are in 4i alignments and will attack the outside hip of the guard. We ask these players to be aggressive and cling onto the hip of pulling guards. If run properly, this helps to eliminate cutback alleys against pin/pull and power schemes.

LB: The Rover and Mike serve as our box force defenders off the edge attacking the outside hip of any lead blockers or the back itself. Their general technique is to stay square and squeeze the LOS to deter any cutup lanes while always maintaining contain. Our general rule is as follows:

The Will plays over the top of the 5 down and is a free runner. We read a “Big Triangle” of the guards through the RB. The weakness of this scheme is the secondary run support over the C gap. As a result, we train the Will to track the inside hip of the deep back by working a “Track & Close” drill to prevent cut ups against zone offensive runs. In our MEG structure, the Will is responsible for the RB in pass, therefore he must be a guy that can run exceptionally to the perimeter and your best tackler.