Matching Coverages to Formations in the 4-2-5

With the evolution of modern offenses to include multiple formations, many personnel groupings, RPO’s, and various tempos, it has become increasingly difficult to call defense to match all those variables.  It has also become harder for defensive coaches to put their players in the best possible situation to always succeed.  One thing we have done to combat today’s modern offenses is to match coverages to the formations we see.  This has enabled us to not worry about being in the perfect call all the time but rather just know what coverage to be in based on what the offense is giving us.  One word tells our defense that we are playing zone match coverage and the players will call the coverage to the formation.  We do this to play sound against our opponents’ best run plays while being sounds against vertical routes.  We will pattern match all routes because we want to wind up in man situations and not spot dropping.

We are a 4-2-5 defense that will always play split-field coverage unless we are blitzing 5,6,7 and playing straight man or man free.  We will always employ a four-man front varying the alignment of the two defensive tackles depending on the Tight End, the location of back or field/boundary.  Our Defensive Ends will always be playing in a five-technique to an open end and slightly inside eye of the Tight End.  Our Inside Backers will always be in the box and move slightly to our game plan rules.  We will play our Free Safety and Strike (Strong Safety) to the field.  Our Whip (Weak Safety) will always align to the boundary and we do not flip our corners.  The FS is the boss of his side of the formation and the Whip is the boss of his side.  Both bosses are responsible for letting the defenders on their side know the coverage calls.  The FS makes a Roger/Louie call telling everyone which side he and the Strike will align.  To make it easy we do this by:

The first day of installation we teach defensive players, mainly the FS and Whip to recognize the formation to their side of the ball and to call out the number of backs (this is the job of the Bandit backer).  To one side of the formation it can only be the following:

Sky- Wide receiver by himself in two backs

Nub- One TE as only eligible to that side

The first coverage we teach is what we call black (2 read) or (Palms).  We only run this to the side of the formation with a detached two receivers.  This can be run to the Roger/Louie call or away from it.  Diagram I shows the basic alignment and keys in this coverage.  The cornerback is at 5 yards with inside leverage and tilted inside toward the QB with his eyes on the #2 receiver.  The FS is at 8-10 yards inside of the #2 receiver with his eyes on that #2 receiver, buzzing his feet or slowly backpedaling depending on his ability and the speed of the WR. 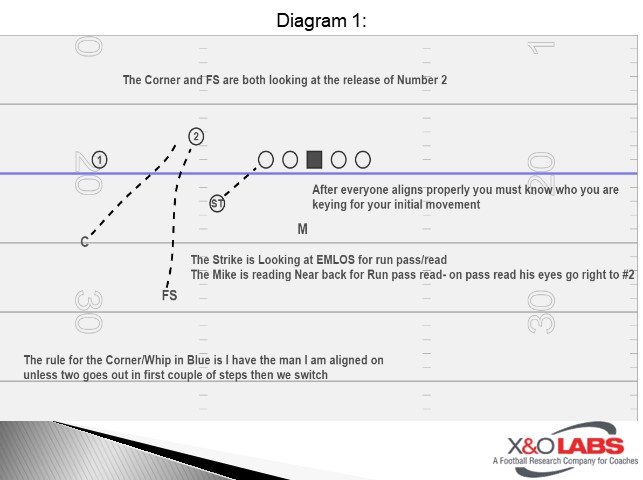 We teach both players to think I have the man I am aligned on “unless”.  The unless principle here means if #2 goes out in his first three steps.  If #2 were to go out in those first three steps, the corner has #1 and the FS would switch on #2.   We teach it a little different than most teams that run this type of coverage.  We have the corners real aggressive on the out breaking route and we are not waiting for our leverage to be threatened.  We feel we can do this because the FS is aligned on #2 and is looking at #2 for his read and not the QB or uncovered lineman.  If #2 bubbles or backpedals this triggers the corner to play the bubble and the FS to be over the top of the blocker in case if it’s a stalk and go or crack and go to the receiver who was blocking.

The real benefit of playing this coverage is that to the Roger/Louie side we have an extra player.  We align that extra player, the Strike, between EMLOS and #2 cheating closer to the box on run downs.  He reads EMLOS for run/pass read and on pass reads he gets underneath #1 or plays the swing of the back.  The reason we like it so much is the fact he can really help in the run game from that alignment.  On any down block by the OT, he is coming right now.  If its zone read, our DE is bending and forcing the QB to pull the ball to that Strike. There are many times we force the QB to pull on zone read, and the Strike is right there on the QB.   If it’s a gap scheme play with DE getting kicked out the Strike will be there for the bounce when the defensive end plays the kick-out block correctly making the ball spill.   If the #2 WR decides to block down on the Strike, this triggers the FS to come up right away playing downhill vs the run.