In defending the RPO game, a decision has to be made by defensive coordinators on whether or not they stay in two-high or one-high safety structures. While the protocols of this decision can be influenced by several variables—running ability of the quarterback, a potential mismatch on the perimeter—essentially it will boil down to what facet of the option game a defensive coordinator wants to commit to defending. While we will analyze this decision making process further, we’ve found that the philosophy behind making this decision relies on the following:

But the coaches we researched with in defending the RPO element believed that equal numbers is a detriment, particularly if your defenders are not as talented as those on the other side of the ball. Then what? It becomes necessary to find a way to get a plus one or a plus one and a half numbers advantage to whatever element of that option game a defensive coordinator is choosing to defend. That is being done by playing two-high safety structures where help is given to both the run and pass equally.

So, now the dynamic has shifted to defending the RPO game with two-high safety structures and the thought process is to keep those two safeties high so they can trigger quicker on the run or pass game by studying a pre-snap (or post-snap) visual cue rather than being tied to the reaction of a particular receiver as they would be in man coverage. It allows them to be an extra player in the run game or an extra defender in the pass game based on the formation presented by the offense. While we will detail the pre-snap cues that trigger these reads by the safeties in a later case, the roles of the overhang defenders (or invert players) become even more prominent. These are the dual read defenders, the ones that the quarterback is reading to make his choice to run or throw the football.

It is a defensive coordinator’s job now to protect those overhangs. In this case, we are going to study the means in which these defensive coaches are protecting those overhangs, either by defensive structure, pressure or by adjusting to the offensive formation.

Editor’s Note: For teaching purposes, the techniques and fundamentals of the overhang defender will be presented in 2x2 open formation. We will detail how coaches are adjusting to other formations later in this report.

Identifying the Overhang Defender Based on Coverage

In order to keep two-high safety structures, there will be an overhang defender responsible for playing either run or pass and it is this same overhang defender that the quarterback will look to manipulate based on his movement. This is the defender that is tied to both a gap in the run game and a responsibility in the pass game. Consider the following formations and the overhang defenders that can be influenced. While there are a multitude of formations that can be presented by the offense, we wanted to present the most common ones associated with RPOs, according to our research and the stress they place on a defense. 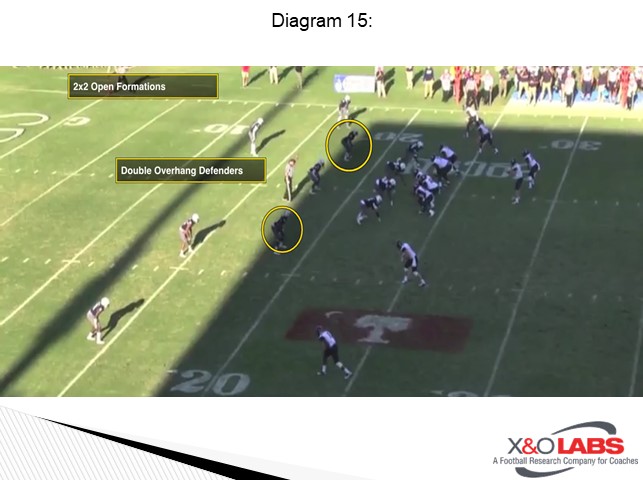 The challenge in defending 10 personnel doubles formations is that the width of the receivers can solicit a five-man box to defend six potential gaps in the run game. This is nothing new; defending this formation has become an ageless paradox that has plagued defensive coordinators since the early 2000’s when then West Virginia head coach Rich Rodriquez was dicing opponents with the zone option with running back Steve Slaton and quarterback Pat White.