Creating Disruption with Your Even Front DEs with the Bend, Squeeze or Jet

When building your defense, and before implementing it, you must have a vision of what you want it to look like. I think most Defensive Coordinators would envision an attacking, relentless and physical defense. But how exactly you get there and where you begin to build this, matters to the success of your unit. I believe that winning defenses are built from the DL backwards. My philosophy, is and always will be, that in football the BEST LINEs WIN. In the following we will focus on the most important and disruptive parts of our defensive LINE, the DE’s.

Our defense will be most successful by placing a large emphasis on playing speed and aggressive defensive ends, with length. The size or weight of the player is not the most essential part required for the construction, physicality and effort are most essential. This is especially true when choosing your ends.  I have always played these types of players and in the following article I will map out three specific techniques that will allow your defensive ends to be the disruptors that they should be.

Before we get into the specifics of our defensive end technique it is important to point out that our even front consists of two DT’s and two DE’s. One side is identified as the strong side and they travel to the passing strength. These two are the Nose, who is either in a 2i or 0 shade, and a 5 tech $tud DE. The other side is referred to as the weak side End (5 tech) and 3 tech Tackle. 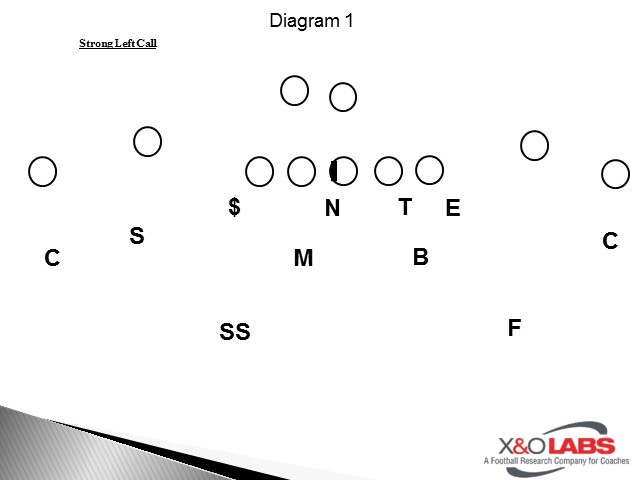 Many of our calls are based on the hash including playing the three technique (weakside) to the boundary as well as playing the better safety to that side as well. In the Diagram 1 the boundary is to the right. That safety, our Free Safety, must be a dynamic athlete capable of playing a variety of spots.

Since at the high school level we cannot shop for our groceries, as Bill Parcells so eloquently stated, we have to find the correct players to play the correct positions. The positions we put them at are critical to the individual’s success as well as the team’s success. We prioritize the following traits when looking for our defensive ends:

The proper explosion & physicality that is necessary for our DE’s to play with, begins with the stance. The proper stance that is to be utilized by our linemen will allow for an explosive takeoff and the ability to read as they give relentless effort. We teach a sprinters type stance. They MUST learn, practice AND BECOME COMFORTABLE USING BOTH A RIGHT HAND STANCE AND A LEFT HAND STANCE. We plan on a future entry that will focus on developing your DE’s through specific skills and drills in a progressive manner.

The stance technique is taught as follows: