Now, we’ll start to explore perhaps the most intriguing aspect of the 4-2-5 defense (or any defense for that matter) the pressure package.  We’ve found that many 4-2-5 coaches will devise their blitz scheme around both offensive personnel and formation.  Some of these coaches check blitzes based on formation (such as the Tiger Cat package below) where some used "run as called" pressures, meaning the blitz does get run regardless of what the offense comes out in.

When we conducted our research on the 4-2-5 blitz package we found some interesting data on what formations coaches like to pressure and which players they like to pressure with.  The concluding data shows that (these are all majority numbers).

We will present all of the variations of these blitzes in this report.

Since this is the most popular blitz package of the coaches we surveyed, we’ll start here.  What better way to start than to analyze the Virginia Tech Hokies blitz package?  The way the Hokies classify their three deep/three under blitz packages are by field and boundary pressures.  But, before we get into who is blitzing, we should give a brief explanation of three-deep, three-under coverage before detailing the blitz.

We know as coaches that you must teach the coverage first, before dialing up the blitz.  This can be a common mistake in installation, particularly if coaches get trigger-happy (and this can happen) by dialing up all the variants of a zone pressure package.

Deep Thirds Player: These two players, usually the corners, are responsible for (not surprisingly) the deep third of the field.  They can start from a press alignment and "bail out" pre-snap or can start in a regular off alignment (1×7 yards) off number one receiver.   This player can also be a safety on a corner blitz (which is shown below).  This player must handle and out-breaking routes, which can be an effective throw against zone pressures, as well as any sail routes down the hash.  They would not be responsible for post routes.

Middle Thirds Player: This player is responsible for the post-area of the defense.  He must be the "center fielder" of the defense and be able to leverage any seam routes down the middle of the field.  He has to make sure to stay deeper than the deepest of any vertical routes.  He can start in a two-deep rotation, but must end up as the middle thirds player once the ball is snapped.

Hot to 2 Players: These two players, most commonly referred to as "SCIFF" players, are responsible for Collisioning the Seam routes, Getting under the Curl routes, and Driving through the Flat routes.  Realistically, they are responsible for handling the number two receiver post-snap and must wall off any crossers.

Hot to 3 Player: This player is responsible for the number three receiver post-snap.  He will open up to the three-receiver side post snap, but end up matching the final number three which will usually be the running back in spread formations.

Before we detail the blitz, there are several specific techniques that must be explained, particularly used by the first level defenders or the defensive line.  Of course, it’s easy to draw up any blitz on paper, but it’s imperative that coaches explain the technique their players need to use to execute the blitz successfully.

Long Whip: This is used by a defensive lineman to the side of the blitz where he needs to get two gaps inside on the snap of the ball.  Usually, he’ll read the adjacent hip of the defensive lineman in the gap he’s aiming for.  If that hip comes at him, which means the gap is closed, he’ll redirect into the next open gap (Diagram 1).  If that adjacent lineman’s hip goes away, he continues to penetrate the intended gap (Diagram 2). 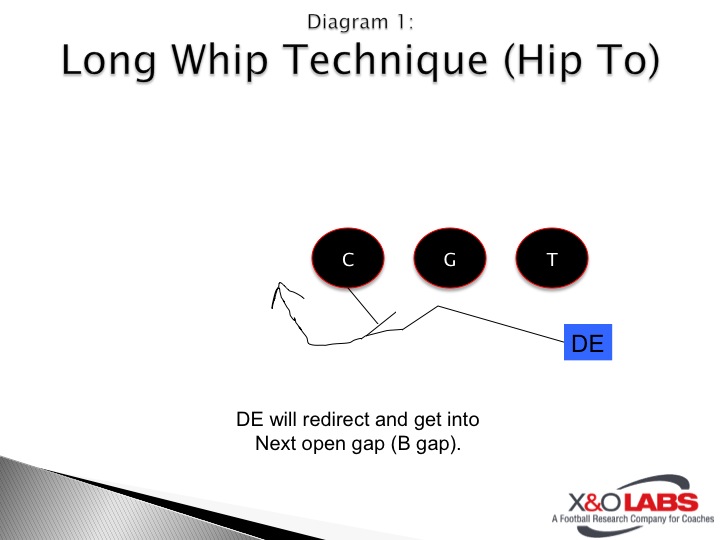 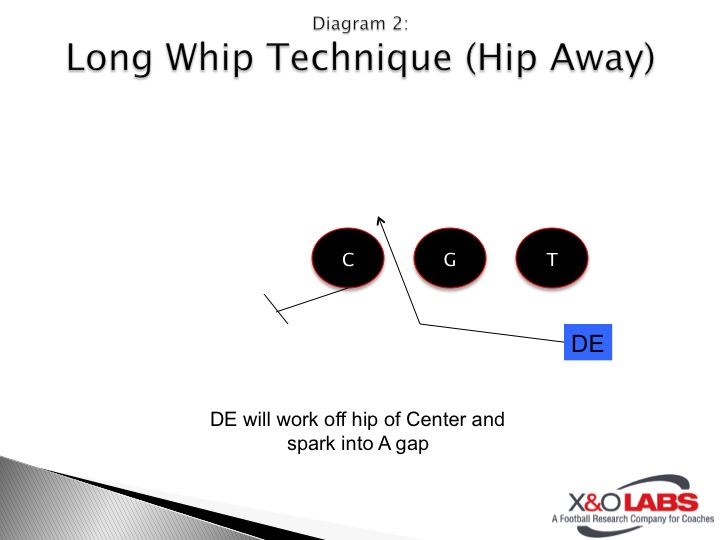