Researchers' Note: Once you finish reading Case 1 of this study, we would like for you to answer 5 survey questions.  The link to the survey questions are below.  The feedback you provide will go a long way to helping us provide you better research.  Thank you.

In this case study of our 4-2-5 special report, X&O Labs will present the various ways that the coaches that we spoke with utilize the front four in the 4-2-5 defense.  It’s important to note this is NOT a technique oriented report - you can find all you need on this topic by reading X&O Labs defensive line researcher Mickey Mays report on defensive line play (located in our Special Reports section).  Instead, this report is a synopsis of various pre-snap and post-snap movements by defensive lineman in the 4-2-5 scheme.

It’s a fact that 68.5 percent of coaches that run the 4-2-5 scheme call their front separate from their coverage.  This means that while the strength call for the front four may be in one direction, the coverage strength (which is usually predicated on the passing strength) could be called opposite.   An example could be a pro/slot set (Diagram 1).  While the strength of the front may be called to the tight end, the coverage strength would be set to the twin receiver side, it is the side with the most eligible receivers. 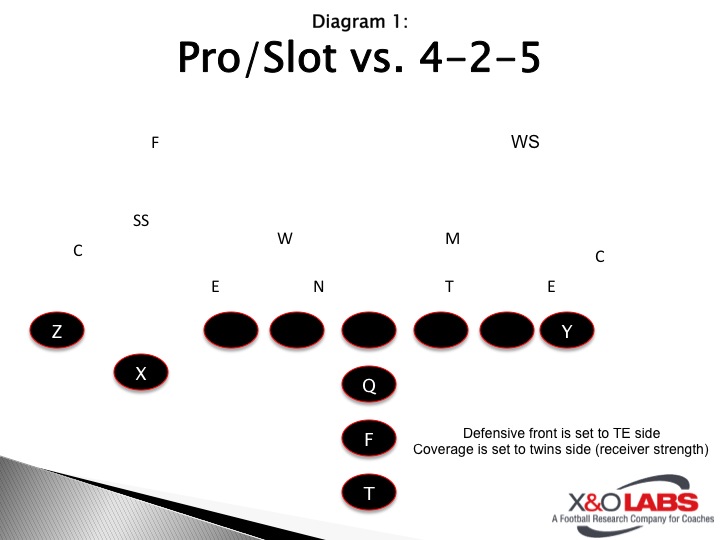 Tight Call: 3-technique aligns to the side of the tight end (Diagram 2).  Our research found 81.9 percent of coaches prefer to set their front this way. 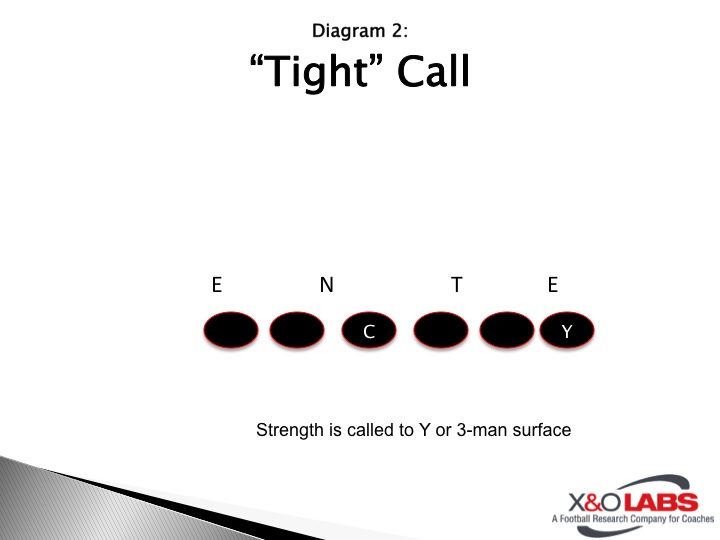 Split Call: 3-technique aligns away from the side of the tight end (Diagram 3). 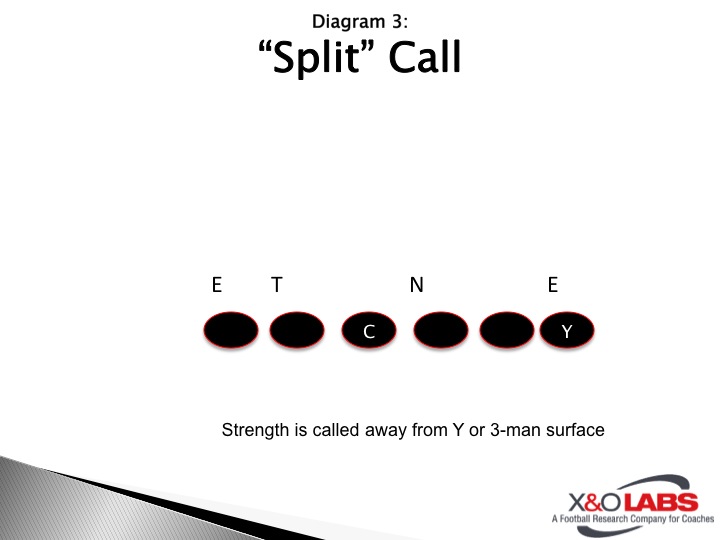 Field Call: 3- technique aligns to the wide side of the field (Diagram 4).  Our research found that 18 percent of coaches prefer to set their front this way. 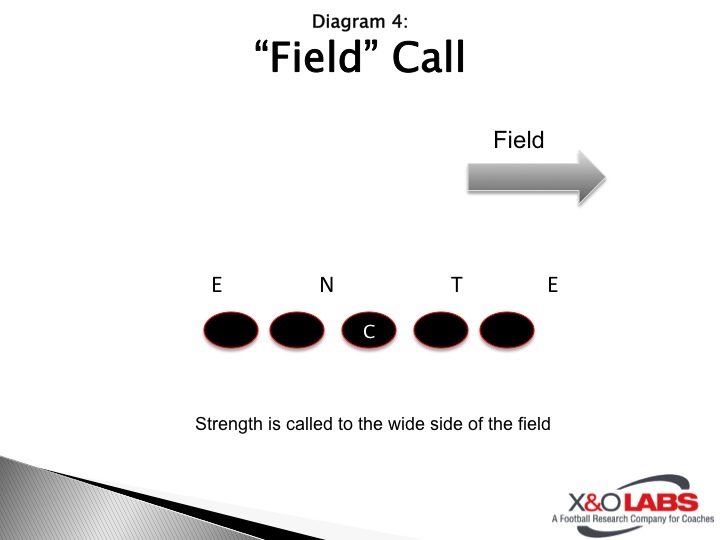 Boundary Call: 3-technique aligns to the boundary side of the field (Diagram 5). 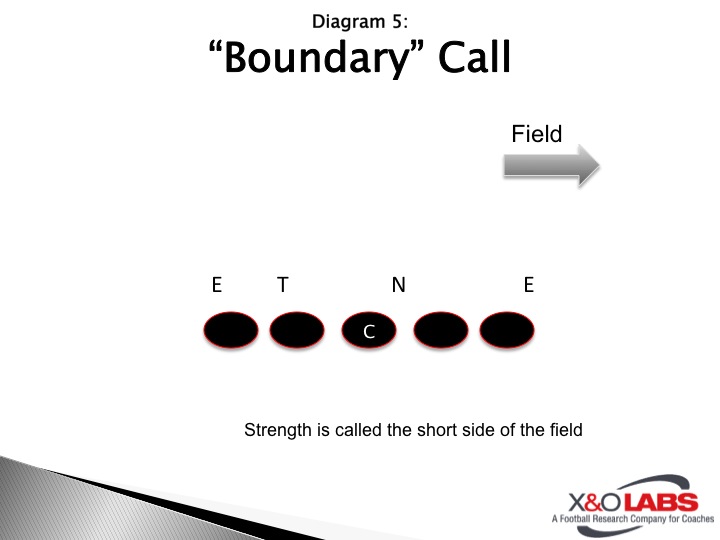 Note:  Any "G" call would tell the Nose Guard will line up on the inside shade of the Guard.

2i Technique vs. a Shade Nose

Using the "G" front is synonymous with 4-2-5 defenses.  Perhaps Bud Foster, the defensive coordinator at Virginia Tech, put the "G" technique on the map with some of the studs he had playing that position in Blacksburg.  While the Hokies made a living by using the 2i technique, not all 4-2-5 coaches use it.  When X&O Labs inquired about how and when to use the 2i technique instead of a shade on the Center, our research found that 67.8 percent play with a 2i technique while 37 percent will use a 2i technique with a strong weak side run tendency.

For Chuck Clemens, the defensive line coach at the University of Central Missouri, the use of the 2i technique proved advantageous in a number of ways.  "It gave the nose guard a much better leveraged position vs. the chip block with the center and guard on weak side run plays (Diagram 6)," said Clemens.   "In a shade technique, he could be fighting the Center, while the Guard is able to knock him on the angle and still get to the second level linebacker. 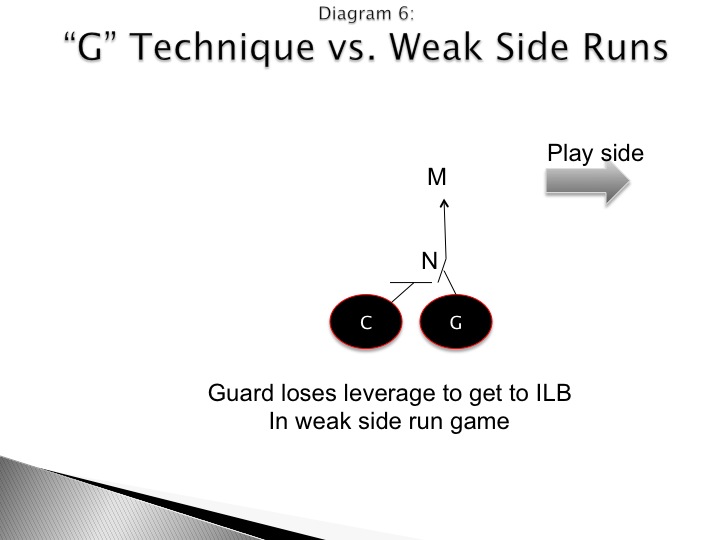 "The Center is always going to spend time on him, so now we can play aggressive on the inside shoulder of the guard in any zone schemes and if the Guard climbs we should be able to take the B gap and have the backer exchange gaps with us by playing the A gap (Diagram 7)." 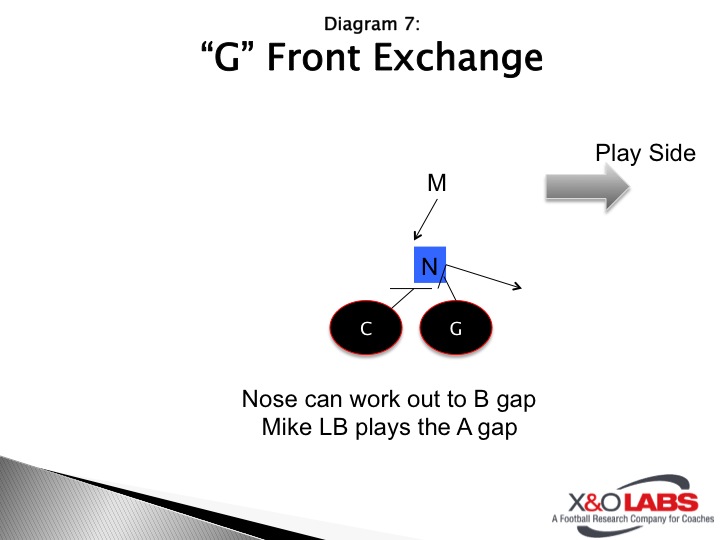 "When we played with the shade technique, we’d get the true double team and the linebacker would stick his head in the B gap and get blocked.  "The Center would wind up overtaking our shade technique because he didn’t have a good leveraged position on him (Diagram 8). That 2i technique also gives the Nose a cleaner shot on the back block and pull by the guard on power (Diagram 9).  It gives him leverage to slam that Center on the back block rather than getting pushed up field.   The hardest thing we do as coaches is tell that Nose to switch from a 2i to a shade technique.  He should have to learn one spot so that the Guard only has one choice on combination double teams or gap double teams. 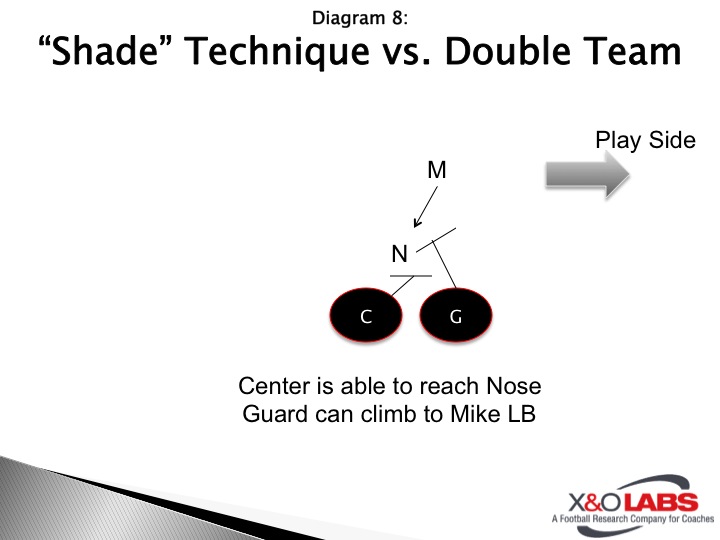 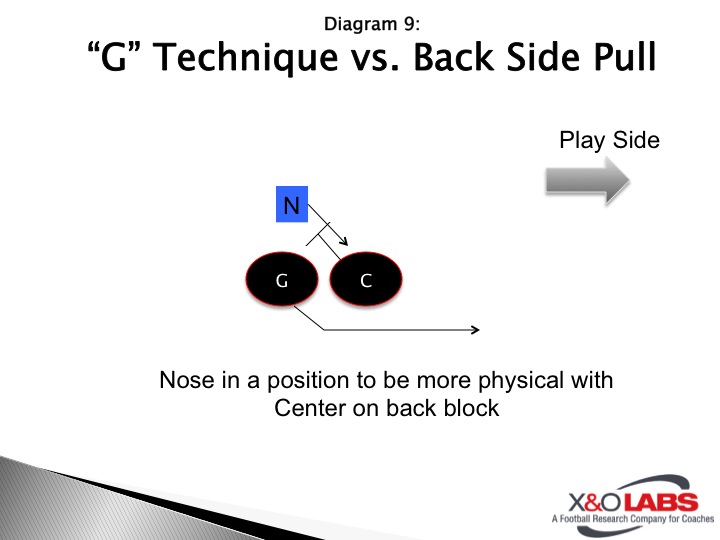 7-Technique vs. a 6-Technique Strong Side Defensive End

We all know the importance of a strong side defensive end in any four-down defensive front, but where that end aligns can differ based on the coach.   Based on our research, 45.2 percent of coaches play their weak side defensive end in a 7-tech on the tight end, including Virginia Tech.  For clarification purposes, a 7-technique defensive end aligns on the inside shade of the tight end (Diagram 10).  Dan Redding, the defensive line coach for perennial NCAA Division II powerhouse Carson-Newman College, strongly believes in the importance of changing up the alignment of his 7-technique in his four down front.  "We will play him heavy on the tight end, then have him move to inside number and even put him on the inside edge," says Redding.  "We want to make the tight end think, keep him guessing.  It can depend on offensive scheme or game situation."