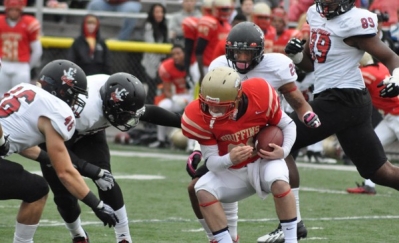 While defensive coordinator and linebackers coach Mike Lopez teaches his players about gap integrity, he puts more of a premium on teaching them fit concepts. The Vulcans specialize in eight man front football out of its 4-2-5 structure, which means each second level player will have to know the following fit responsibilities- plug, cutback, force and fold. Because he will vary the placement of the 3-technique post-snap by using several different fronts, every linebacker and safety in his system are taught these fit concepts and the techniques used to associate with each. In case four, Coach Lopez details those fit concepts as well as the three different fronts he will use to set his first level B-gap player against one-back offenses.

California University and its defensive staff (Dave Cole, Thomas Rebholz, Jr., Jessie Byrd) considers itself to be a multiple personnel, multiple front operation. Since much of what it sees is 10, 11 and 20 personnel, it spends most of its time in Nickel and Dime defense. For the most part, the Vulcans are a four under, three deep, middle of the field closed defense, which relies on boundary rotation where the free safety (who aligns to the boundary) is the extra run fitter. 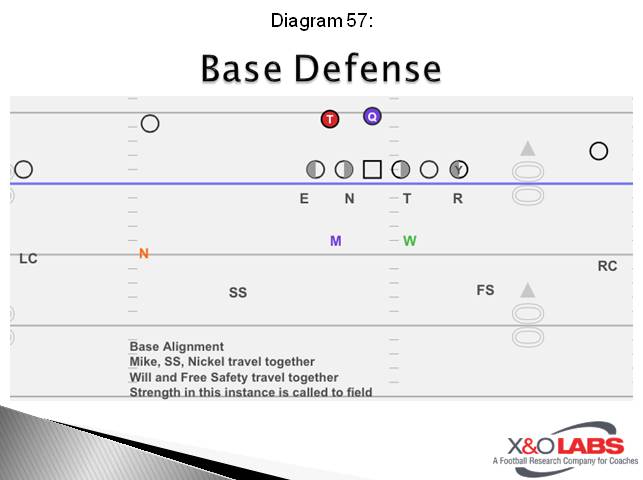 Coach Lopez streamlines his teaching into reinforcing concepts as well as gap responsibilities. Against the one-back run game, he teaches only two flows: fast and direct. Either the run is coming toward you or away from you. Within those two flows, the following run fit terms are enforced:

Force Player- Player resonsible for forcing the ball back inside.

Cutback Player- Player reponsible for tracking the hip of the ball carrier to play any cutback.

Fold Player- Player who is an extra (bonus) player in run away. He will execute a shuffle, shuffle technique and fold in late on the ball carrier.

The Mike, Will, free safety, nickel and strong safety learn all of these fit concepts, which are described below.

Coach Lopez teaches three different types of alignments for his two linebackers: gap, rob and pull. Gap is used in 2x1 sets where the linebacker to the two receiver side is in a 40 alignment- the inside shade of the offensive tackle- while the backer to the single width side is in a 20 alignment or inside shade of the offensive guard he is aligned on (Diagram 58). Rob is used in 2x2 sets where the Mike and Will both align in 30 techniques (Diagram 59). Pull is used in 3x1 sets where the field backer will play in a 50 alignment (outside shade of the tackle and the Will aligns in a 10 technique (stacking a shade) (Diagram 60). As far as a pre-snap key, Coach Lopez talks to his players more about the triangle to vision points. Against one-back formations, Coach Lopez, the triangle is the peripheral vision of the guard, tackle and tailback. He will have the back as a secondary key and specifies on reading the hips of the back to decipher whether it’s a tight Zone scheme like Mid Zone (which is considering direct flow) or a wide Zone scheme such as Outside Zone (which is considered fast flow). It’s more of a concept-based system than teaching a gap methodology.