Editor's Note: Some of the videos in this report contain audio.

The latest trend from offensive coordinators’ perspective is finding the hybrid Y/H that can line-up virtually any and everywhere to keep the defense guessing. The players who can line-up as an offset FB (H), Off Y, On Y, and slot have given defensive coaches headaches in matching personnel especially when there are no substitutions. Regardless of the front, having an overhang that can account for the flex player is important. Having defensive backs that can complement the overhang both in run and pass concepts may be the difference for success of the defense. In this report, I will discuss our reads versus the Y, off Y, and H from the DB position, particularly safety because we are primarily either spinning or keeping two on the roof based on the alignment of the flex player. For identification purposes, I will refer to this player as the flex throughout this report.

20 Personnel (Flex is aligned as RB/FB/H)

Teams that stay in a 20 personnel look will align the flex inside the tackle box. We have played this similar to a three-man surface keeping our backers inside and adjusting in the back end. We are a press 2 scheme by design and want to stay in our base if possible vs 2 back sets. If the flex is aligned as an H, whether on the strong or weak side of the formation, we will generally align to him. With the game plan in mind, many times it will depend on the talent level of the outside WR and the slot to the twin’s side. The skill of those players determines how much attention we can give the flex. In this report, we illustrate how we align vs split backfield, strong flex, and weak flex. As we get into the coaching points, please keep in mind, all of our variations are game planned and we will keep our alignment consistent but change responsibilities as the strength of offenses change from opponent to opponent. At the end of the day, the teams that can show similar alignment, yet run different concepts to confuse the opposition are those who will come out on top usually.

FLEX STRONG: With Power, GT, and Wham schemes reigning as the go-to with 20 personnel, we like to play either press 2 or quarters to this formation. However, we will also spin the safety to the flex side if we feel the offense will run power or a wide zone play. With our front seven often in an under front, we will spin the safety to get a closer force, fit inside with the Mike and Sam and put the backside safety on the roof. The coverage becomes Sky 3. If we remain in two-high, we are either playing quarters to get both safeties involved in the run fits (force) or two and have the corners play press and force. We have also played some man free to the look with the same idea of spinning the safety on the flex side to make it look like sky, but we remain in a cover one concept. 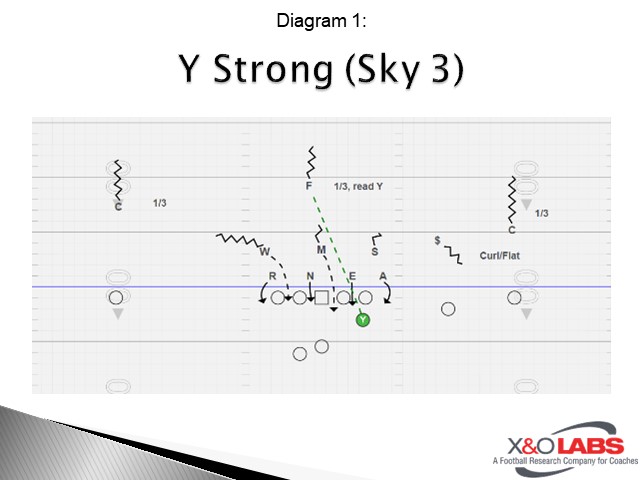 Coaching Points: When staying in two high our initial read is the mesh point and the ball. Our secondary read is #1 to the solo side and #2 to the twins’ side. We react to the flex late, from the safety position. Our alignment should be anywhere between 8-12 yards depending on the down and distance as well as the ability of the player involved. I give our guys flexibility to change up depth as they see fit until they get caught up and then I will make the necessary adjustment.

On the play below, notice the back who is aligned in a strong position of 20 personnel will shoot out to the flat on a sprint flood concept. The safety to the flex is going to scroll, but then cut his scroll and sprint to the sideline once he reads sprint out. Our coaching point is to gain enough depth to keep two routes within breaking distance. The corner's job is to take deep third and keep a two-yard cushion on the deepest route. He does a good job being patient as the wheel route enters his third late in the play. The backside safety who has the middle of the field takes the post and leaves the wheel as the only throw the quarterback has. Nice coverage all around to a Flex look that could have been thrown underneath and gotten us to bite on his shoot route.