Editor’s Note: Brent Barnes just completed his 2nd season at the Defensive Backs Coach at Rhodes College. His arrival in 2012 coincided with an uptick in the Lynx' fortunes on the defensive side of the ball as the unit led the SAA in points against and finished second in total defense. His leadership resulted in first team All-SAA honors for safety Justin Toliver.  Prior to his time at Rhodes, Barnes became the Wide Receivers Coach at Middlebury College. For two seasons, Barnes oversaw a passing offense that set numerous passing and receiving records and coached two different players to first team all-conference honors. Prior to his arrival at Rhodes, Coach Barnes was the Offensive Coordinator at Simon Fraser University, a Division II school in Vancouver, Canada. He led an offense transitioning from the Canadian to American game, coaching both the wide receivers and quarterbacks. His offenses finished second (2010) and first (2011) in the conference in rushing in his two seasons at the helm 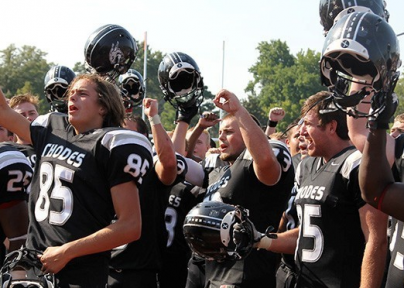 Our starting point for coaching the secondary is the eyes. We teach eyes more than anything else with the belief that if the eyes are wrong, everything else (footwork, ball skills, etc.) is irrelevant. How many times did you see in bowl season receivers running free down the field for big gains and easy touchdowns. We call those “free yards” because you are simply giving them to the offense regardless of the talent of the players involved. Our #1 goal is to minimize free yards with proper eye technique. In this day and age, defenses are going to give up yards and points. It’s an offensive world. But we want them to make plays and not make it easy for them.

With that in mind, we use a rather defined teaching progression when we install this concept.  We always start with diagrams and film in meetings before we ever step foot on the field, after that we take our time reviewing the routes in individual before ever moving into 7 on 7 and team time.  The real key is taking the time needed in the individual time.  Here are some points on how we have found that time to work most effectively.