During the offseason leading up to the 2017 season, our main focus as a defense was to find a way to add numbers into our run fit defense. We needed to do this without sacrificing our ability to match vertical routes and allow an offense to find uncontested throws. We decided to install a two high robber defense to give us the ability to accomplish this.

To run this coverage, you must have two safeties that do not shy away from inserting themselves into the run game when their read takes them there. They must also have enough speed and acceleration to run with slot receivers when an offense tries to challenge the deep middle of the field. Your corners need to have patience and trust their underneath coverage. They must also have the ability to win on deep passes against the top receivers in the league.

Our success is built on the discipline of our defenders to keep their eyes on their read progression and trust what their keys are telling them. We work constantly to master the small techniques within the scheme that put our guys in position to make big plays.

When teaching this coverage to our student athletes, we begin by teaching it versus a Twins formation to our passing strength. Our free safety alignment is a 10 yard apex between the #2 receiver and the tackle. Our strong safety is aligned 5 by 1 outside leverage of the #2 receiver. The strong side corner is aligned 7 by 1 with inside leverage on the #1 receiver. The middle linebacker’s alignment will vary based on front calls and the running strength. 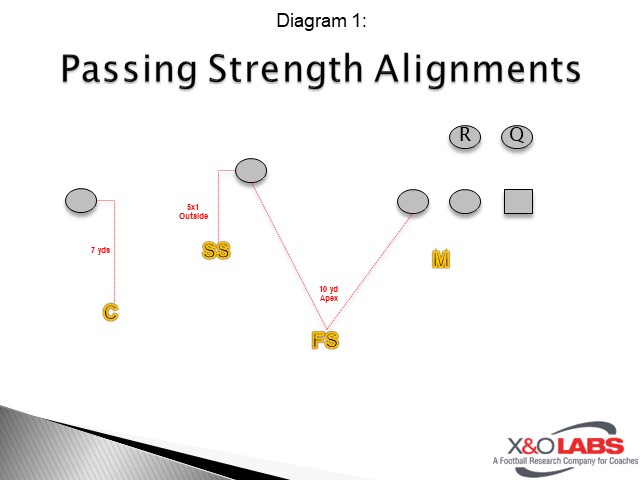 The strong safety will begin with his eyes focused on the end man on the line of scrimmage, through the backfield. He must also keep the #2 receiver in his peripheral vision to see immediate bubble routes. The strong safety’s responsibility versus the pass is the “flat” zone. Once he gets a pass read, his eyes go from the #2 receiver to the #1 receiver. If #2 pushed inside or vertical, he will work underneath #1. Against the run, the strong safety is our force player with perimeter run to him. With run inside or away, he is ultimate cutback player and he should never over pursue the football.

The strong side corner will begin with his eyes on the same keys as the strong safety and free safety. Like the strong safety, he has pass first responsibility. Once he gets a pass read, he becomes a half field corner. He reads from the #2 receiver to the #1 receiver and must be deeper than all routes. In the run game, the corner is a secondary force player with run to and the “touchdown saver” with run away by always taking a high angle.

The middle linebacker will begin with his eyes on the surface of the offensive line. Once he gets a pass read, he will drop to the strong side “hook.” We call this responsibility a “hole technique.” His eyes push from the #3 receiver to the #2 receiver. He will wall #3 until another route enters his zone. With a run read, the middle linebacker’s run fit will change based on the front call.

Weak Side – Alignment, Keys and Reasonability 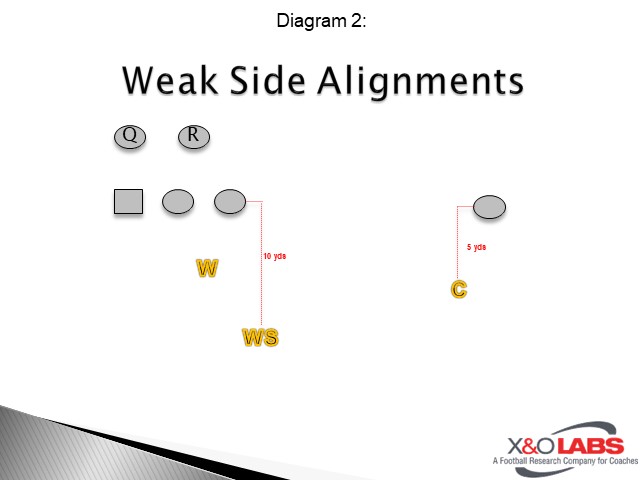