Ok, so most coaches know that playing Quarters coverage against closed sets give them an opportunity to put nine in the box and defend the run game while still having four defensive backs to handle any play-action responsibilities.  You’ve got nine run defenders against seven potential blockers, a tremendous defensive advantage. A "fight in a phone booth," one coach told us.  But, offenses are getting coached too, and are now opening up their offensive structures just to force you out of your Safety run support.  Adjustment have to be made, the question is how do you make them?

In this Case, we are going to present our research on how to defend open sets, which many coaches call "two wide" or "two detached" formations.  Of course, this can also mean "three detached" or "three wide" in a typical trips formation.  Some general notes we found when conducting our study:

Of course, these are general benchmarks, things get more specific based on what offenses are presenting.  Since the most common open offensive formation is an open 2x2 set, most common in spread teams, we will start our research there. 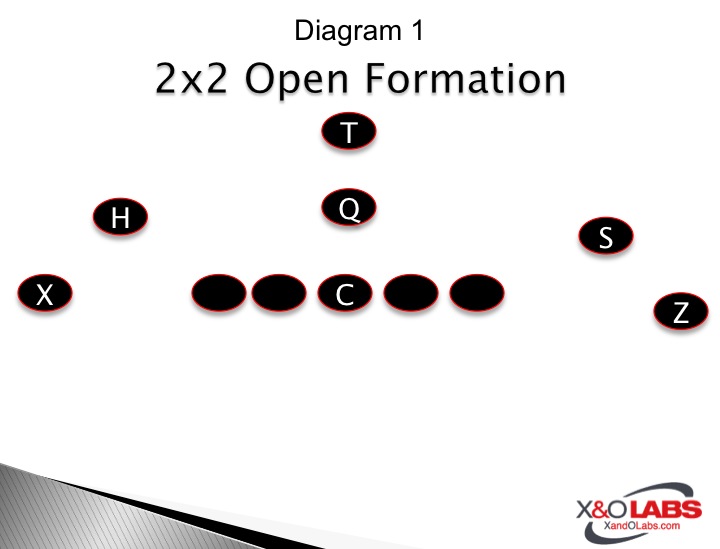 Always a topic of conversation among coaches that use Quarters Coverage is how best to handle 2x2 formations.  It seems that the structure of Quarters coverage itself is ideal for 2x2 formations because you have the ability to handle four vertical threats with four secondary defenders without risking any underneath defenders in coverage (Diagram 2).   Once the slot receivers are able to cross linebacker depth, a safety is able to jump them right away.  Playing Quarters coverage against four vertical threats often gives offensive coordinators problems because a defense forces a tight window (between the second level and third level defenders) to place the ball. 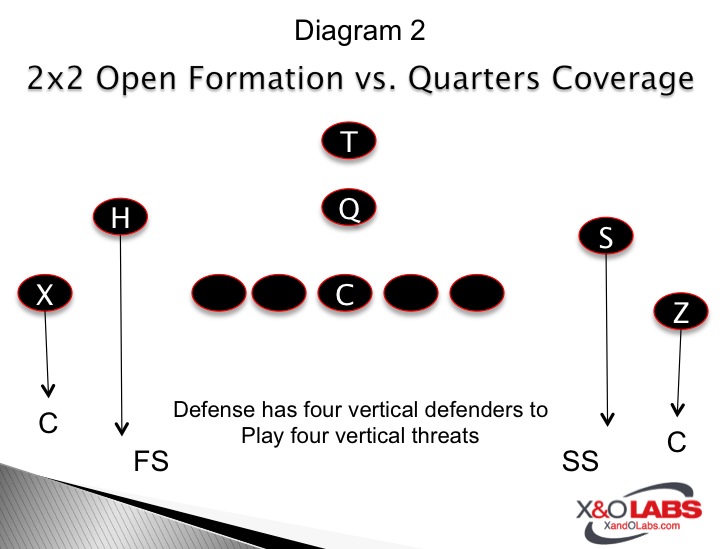 But while a defense could be protected vertically by using Quarters coverage, horizontally it could be an entirely different issue.  Offenses can use Post/Wheel or slant/arrow combinations to attack defenses in the flat, which is an area of constant vulnerability of Quarters defenses.

One answer to this formation is to play what amounts to a Soft Cover Two check against two receivers to one side of the formation.   This essentially protects defenses against the threat of number two on a wheel or flat breaking route because the Corner will play any number two receiver on an out-breaking route.  It’s called "two read" because both the Safety and Corner are reading number two based on his release.  His release can be all of the following variants.

In this type of coverage, the Corner’s rules are simple: 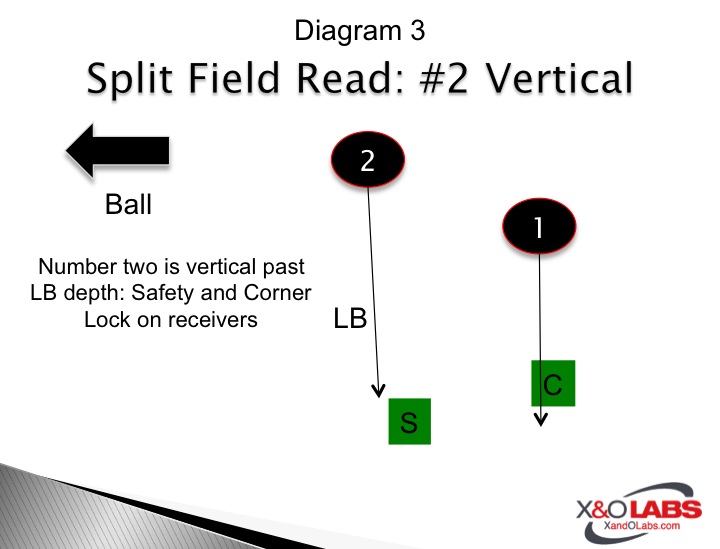 Since it is the defensive backs making these adjustments on field, anytime the offense comes out with a detached number two receiver and could be a vertical threat, Shap Boyd, the defensive coordinator at Muskingum College, uses an "Alert Call" made by his Safeties.  His rules are below:

The benefit of the Alert call is keeping the outside linebackers close to the core in run-downs.   Since both outside linebackers don’t have flat responsibilities, it allows them to stay what Boyd calls "the hip position" on the defensive end to their side.  Boyd uses it more on run downs or what he calls "tweener" downs when he’s not given a tendency on a run or pass.